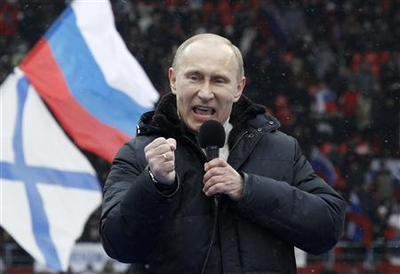 Vladimir Putin has already won next week’s presidential election. He is the only viable candidate in a field of Kremlin approved have-beens and sell-outs; considerable administrative resources have been marshaled to secure his first-round victory; and he retains popularity measurably greater than that of his affiliated party. His actions following this long-expected victory will signal a lot about his plans for his next term, his beliefs about Russia’s protest movement, and the course Russia is likely to take over the next few years.

Putin has been playing a double game in order to secure as many legitimate votes as possible. Initially, attempts were made to placate Russia’s nascent protest movement by promising political reforms, including a return to the direct election of governors. At the same time, Putin has been beating an old drum—announcing a buildup of Russia’s armed forces, fencing with imaginary threats, playing on distrust of the West, and even using an assassination plot against his own person to appeal to his base—nationalists, bureaucrats, and those who still regard Putin as the man who will restore Russia to its former superpower status and stand up to the West and Islamic terror. These Russians typically live far from Moscow and vividly remember life before the economic stability brought by high oil prices and Putin’s rule.

Putin may decide that such gimmicks will be enough to maintain his position for another six years; if so, he will be wrong. His choice of second-in-command will reflect his judgment: if Putin reappoints Medvedev as his prime minister, or selects another, lesser known member of his inner circle, it will be a clear sign that he expects to rule the way he always has: using social expenditure and nationalism to placate his base while residing atop Russia’s vast patronage network. This approach will likely fail. Russians are increasingly discontent with the status quo; therefore, they will be increasingly hard to buy off, as demonstrated by the reports of public employees who have flat out refused to accept money to take part in pro-Putin protests, even at the expense of their jobs.

However, if there is any truth to the rumors that Alexander Kudrin, the liberal former Finance minister who resigned following the fraudulent parliamentary elections last December, might be in line for the job, it could signal that Putin recognizes that his survival depends on co-opting, not ignoring or confronting, the demands of Russia’s protesters. Kudrin was previously noteworthy for having a considerable amount of independent influence in the Kremlin, and his return in a new, upgraded capacity could be a harbinger of real change. One of Medvedev’s own political advisers just last week suggested Kudrin would make a better PM than Medvedev, perhaps a sign of Medvedev’s diminished standing. Putin himself has recently praised Kudrin’s record of service while remaining silent on Medvedev. Of course, Kudrin has also reportedly been in contact with political forces from outside of Putin’s circle, meaning he could be seriously considering throwing in his lot with the opposition.

The future of United Russia is also uncertain. In over one hundred local contests, candidates who were previously members of the party are now running as independents, signaling that the political brand which was once a vehicle for Putin and Putinism is now more an albatross than a lifesaver. Rumors are beginning to circulate that Putin might rename, or even dissolve, the party in an attempt to rebuild its tarnished image.

If Putin thinks that life after the election will be any easier, then he is mistaken. Russia’s protests are not likely to stop now, and their fury will only be renewed if any signs of fraud or improper procedure appear out of the latest elections. The anti-corruption movement, with Alexey Navalny as its figurehead, has gained too much momentum to be simply brushed aside and unless Putin undertakes considerable reforms the protesters will find new grievances. And unlike this election, when Putin’s presidential opponents were tightly leashed and mostly muzzled, the opposition will now have six years to build on the momentum of the protest movement, increase the solidarity of their platform, and improve the viability of their candidates. The Russian political landscape seems to be emerging from an ice age; it will not be easily frozen again.

Dean Jackson is a program assistant with the Office of External Relations.