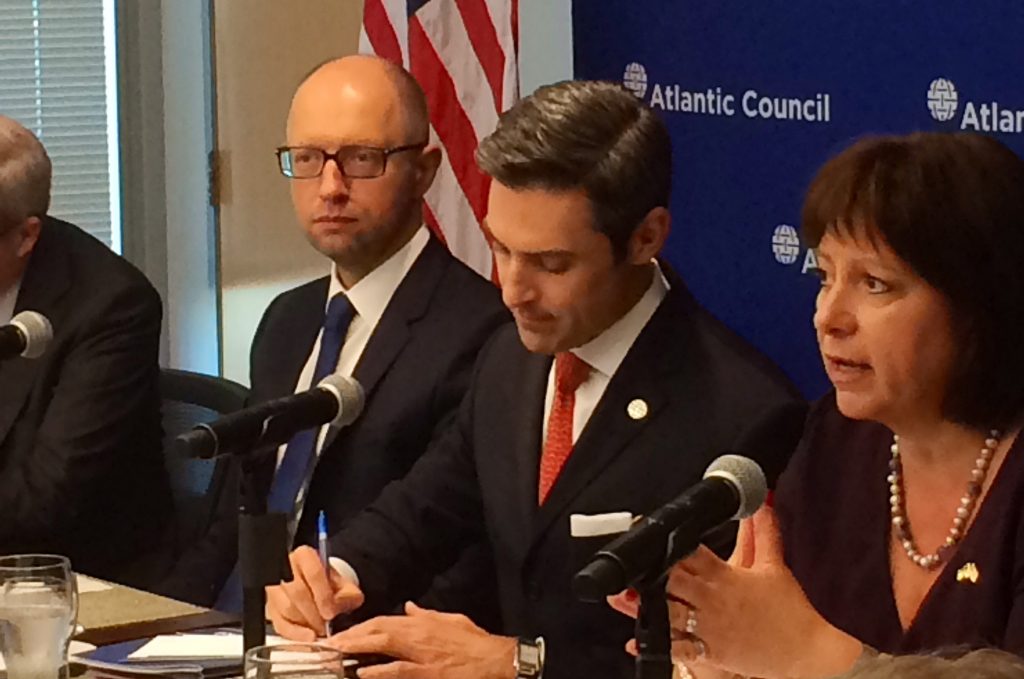 The "ultimate goal" of the Minsk peace agreement is to have Russian President Vladimir Putin and "Russian-led terrorists get out of Ukraine," Ukrainian Prime Minister Arseniy Yatsenyuk (left) said at the Atlantic Council June 9. Damon Wilson, Executive Vice President of the Atlantic Council, and Natalie Jaresko, Ukraine's Finance Minister, participated in the meeting. (Atlantic Council)

Russian President Vladimir Putin has no desire to end the war in eastern Ukraine, said Ukrainian Prime Minister Arseniy Yatsenyuk at a June 9 meeting at the Atlantic Council.

“My take is that Russia is not eager… to have peace and stability, neither in Ukraine nor in Europe,” said Yatsenyuk, citing as evidence a renewed offensive by Russian-backed separatists.

Russia signed a peace agreement February 11 in Minsk that was aimed at ending the conflict. A previous truce, signed in September 2014, collapsed just days after it was arranged.

“We still have this so-called Minsk deal on the table,” Yatsenyuk said. “We still believe that the Minsk deal is the only solution, but chances to implement entirely the Minsk deal are not very high as were expected.”

What would full implementation of that accord look like? “When Putin and his Russian-led terrorists get out of Ukraine. This is the ultimate goal of the Minsk deal,” said Yatsenyuk.

The United States and the European Union imposed sanctions against the Kremlin after Russia annexed Crimea in March 2014 and stepped up military support for separatists in eastern Ukraine. On June 8, the leaders of the G7 countries agreed to keep those sanctions in place, warning they could be ramped up unless Russia fully implements the Minsk agreement.

Yatsenyuk commended the G7’s commitment to sanctions and said he had received reports earlier in the morning that Russian-backed separatists had carried out thirty-two attacks in eastern Ukraine.

Those separatists are preventing Organization for Security and Cooperation in Europe (OSCE) monitors from verifying compliance with the ceasefire by blocking access to territory under their control.

Yatsenyuk said diplomatic efforts to end the war must be buttressed by more tangible military support for Ukraine, specifically the supply of defensive weapons.

In February, a report by the Atlantic Council, the Brookings Institution, and the Chicago Council on Global Affairs called on the Obama administration to give Ukraine defensive weapons—and $3 billion in military aid over three years—to oppose the Russian invasion and deter further Russian aggression in Eastern Europe.

The war in Ukraine’s industrial east has had “tremendous negative implications” for his country’s economy, said Yatsenyuk, adding that it has already killed 1,800 Ukrainian soldiers and more than 8,000 civilians.

“This war cost us from $5 to $7 million per day, which is a huge amount of cash for Ukraine, which is in a very complicated financial situation,” he added.

The Prime Minister wrote in the Washington Post that his country is fighting a war on two fronts. While the military war is one front, the second is the one against a “legacy of corruption and misrule,” he wrote.

Speaking at the Atlantic Council, Yatsenyuk said his government has put in place a comprehensive agenda to root out corruption, overhaul the tax system, and pay wages and pensions. He said Kyiv is doing “quite well” in terms of budget revenues, despite losing heavily developed industrial sectors to Russian-led separatists.

The government has also overhauled the energy sector and eliminated “tycoons and middlemen that existed like vampires sitting on the Ukrainian natural gas sector,” said Yatsenyuk.

One such tycoon, Dmytro Firtash, was arrested on suspicion of bribery and then released on bail in Vienna last year. He denies the corruption charges against him, and in April, an Austrian court turned down a US extradition request, saying there was not enough evidence.

“We believe this Ukrainian tycoon has to be brought to justice in the United States,” Yatsenyuk said of Firtash.

Earlier this year, the Ukrainian government secured a four-year bailout from the IMF and other creditors.

“We expect to get up to $25 billion in the coming four years, but the gap is much bigger,” said Yatsenyuk.

The government has taken a number of steps to cut costs, including shutting down entitlement programs. But as a result of the war, it has had to increase military expenditures to up to 5 percent of the GDP.

“We did everything we can to fix the budget gap. We still need an additional enormous amount of financial support,” said the Prime Minister, who was joined at the meeting by Ukrainian Finance Minister Natalie Jaresko.

Jaresko said the Ukrainian government is focused on four pillars to get itself out of the financial crisis.

These pillars, she said, are: stabilizing the macroeconomic situation and rebuilding reserves to build confidence for the banking system; restructuring an “extraordinarily high” public debt—$70 billion of debt is currently outstanding; kick-starting investment in Ukraine; and creating an attractive business investor environment including tax policy reforms and massive amounts of deregulation.

“Over 90 percent of our territory is untouched by war,” said Jaresko, making the case for accelerating investment in Ukraine.

Yatsenyuk urged continued international support for Ukraine, noting that his country relies on US and EU joint actions to de-escalate the situation and to make Russia pay the price and obey the rule of law.

“If we succeed, this will be the best answer to the dictatorship regime of President Putin that the free world supports Ukraine and that we are ready to stay united and respond strongly, boldly, and wisely tackling Russian-led aggression,” he added.