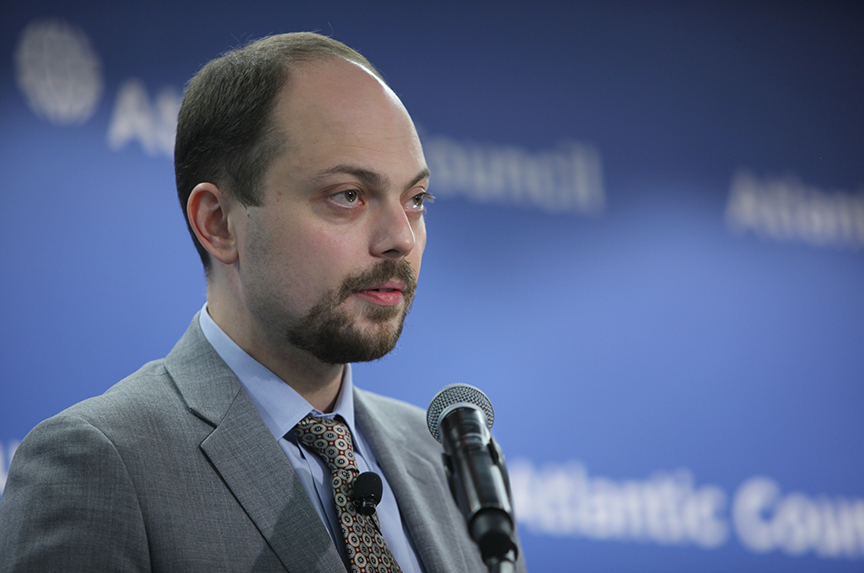 Two US senators—one a Republican and the other a Democrat—and a Russian opposition activist who has survived two apparent attempts on his life made a call for greater international pressure on Russian President Vladimir Putin to respect human rights. Speaking at the Atlantic Council on March 30, all three stated quite clearly that even as this pressure is applied, care must be taken not to hurt the Russian people in the process.

Vladimir Kara-Murza, an ardent critic of Putin who has twice slipped into a coma after mysteriously falling ill—once in 2015 and more recently in February—said it was important to turn up the heat on Putin and his cronies, but noted that it is equally important not to equate Putin’s regime with the Russian people.

“We’re against sanctions on Russia. We’re against sanctions on the Russian people,” said Kara-Murza, vice chairman of Open Russia. “It is essential that the US is not seen as seeking to punish the Russian people for the actions of a regime that they can neither unseat in a free election—because we don’t have any—and cannot hold to account through independent media or a legitimate parliament—because we don’t have any either,” he added.

Kara-Murza was preceded in his remarks by Sen. Ben Cardin (D-MD) and Sen. Marco Rubio (R-FL). He later participated in a discussion with Carl Gershman, president of the National Endowment for Democracy, and Tom Malinowski, who served as assistant secretary of state for democracy, human rights, and labor in the Obama administration. Alina Polyakova, director of research for Europe and Eurasia at the Atlantic Council, moderated the discussion.

Cardin, who, along with Rubio, is a cosponsor of the Countering Russian Hostilities Act, accused Russia of violating the rights of its citizens; attacking the United States over the course of the 2016 election cycle; and interfering in the sovereignty of countries such as Moldova, Ukraine, and Georgia. “We need to make it clear to Russia that that is not acceptable,” Cardin said. The Countering Russian Hostilities Act also aims to fight Russian propaganda and fake news.

The United States and the European Union imposed sanctions on Russia in response to its annexation of Crimea in 2014 and support for separatists in eastern Ukraine. These sanctions have been effective and should be strengthened, said Cardin, while noting that the Countering Russian Hostilities Act can achieve this goal by targeting areas such as the energy sector, how Russia finances its sovereign debt, and how it deals with privatization. “We can strengthen the resolve against Russia, and our European allies understand the importance of this,” he added.

Putin’s administration has cracked down on the opposition—by Kara-Murza’s count, there are currently one hundred political prisoners in Russia—silenced independent media, and intimidated nonprofits by designating them as foreign agents. Besides interfering in the US elections through cyberattacks, Russia has also been accused of meddling in elections in Europe this year.

Malinowski said the heightened level of repression in Russia is a sign of the insecurity of its government. “The strong façade that Putin projects, underneath that façade there must be a tremendous amount of insecurity,” he said.

While the space to support democratic movements inside Russia has shrunk, Malinowski said the United States can still work with Russian activists who are outside the country and Russian-speaking populations in Russia’s neighborhood, including the Baltic States and Ukraine.

Russia’s actions should be a cause of concern because corruption and human rights violations will lead to the instability of the regime, making the world less safe, and because Putin has shown a willingness to attack the United States, said Cardin.

“He did attack America. That’s not even being disputed anymore,” the Democratic senator said. “He is trying to bring down our way of government to create more space so he can expand his influence, his type of leadership in Europe and around the world. We cannot allow that type of gap to exist.”

Putin wants to establish spheres of influence in Europe and the Middle East, said Rubio, noting Russian support for Bashar al-Assad’s regime in Syria. “He is actively working to drive a wedge between Western allies and within Western institutions such as NATO and the European Union. He directly interferes in nations looking to further align themselves with democratic values and with the United States,” the Republican senator added.

“People in the West have to get over the illusion that we are dealing with a normal country. We are not. We have to protect ourselves more. We also have to deal with our own internal problems,” he added.

US President Donald Trump’s commitment to taking a strong stand against Russia has, however, been called into question by his own praise for Putin and by revelations of links between his advisers—including former National Security Advisor Michael Flynn—and the Kremlin. These connections are the subject of investigations by the Federal Bureau of Investigation (FBI) as well as House and Senate committees.

Given this reality, Malinowski said, “we do have to be brutally honest… about political developments inside the United States.”

He noted that Trump has repeated Russian propaganda about the absence of US moral authority to condemn others. “It’s exactly what Russian diplomats would say to me,” he said.

In the absence of a leader who will take a strong stand against Russia’s malign intentions, the onus is on the citizens, said Malinowski. He suggested that the US Congress take steps to shut safe havens for dirty money coming out of Russia. Malinowksi was confident that his former bureau at the State Department will continue to support civil society in Russia, but, he added, “our duty is to make sure [the State Department] get the resources despite a very, very clear intention from the president to deny them.” Trump’s budget plan includes massive cuts to foreign aid.

US Secretary of State Rex Tillerson, meanwhile, is expected to visit Russia in April.

Rubio said that the Trump administration must make human rights and democracy key pillars of its foreign policy and national security strategies. He said it is also important to consider new measures to target state-sanctioned corruption at the top echelons of the Russian government.

On March 26, thousands of Russians protested against government corruption in almost ninety cities across Russia. The protests were sparked by an investigative video released by Russian opposition activist Alexei Navalny’s anti-corruption foundation, which alleged that Russian Prime Minister Dmitry Medvedev had amassed vast realestate holdings through bribery. Navalny was one of those arrested during the protests.

Kara-Murza admitted being surprised by the size of the protests, but not by the fact that the protesters were mostly young Russians—what Kara-Murza described as “the Putin generation” that has grown up knowing only one leader. Putin has been in power for the past seventeen years.

While describing corruption as the “lubricant” of the Putin government, Cardin said he was hopeful that the protests will bring about a change in Russia. “Human rights are not a Western imposition, but a Russian demand,” he said. “This is not about the Russian people; it is about Mr. Putin and his corrupt system that we are fighting.”

Rubio said the protesters realize that their country can once again become a great nation that respects democratic values, the rule of law, and the rights of its citizens. “Sadly, Russia’s current leader has chosen a path of aggression and instability,” he said. “His actions in his own region and his country pose a national security threat to the United States and undermine our interests and the interests of all freedom-loving people.”

In 2012, then US President Barack Obama signed the Magnitsky Act. Cardin was a co-sponsor of the act under which the US assets of human-rights abusers in Russia would be frozen and they would be banned from receiving US visas. The act was named for Sergei Magnitsky, a thirty-seven-year-old lawyer who died in a Moscow detention center in November of 2009. Magnitsky had claimed that he had uncovered a $230 million tax fraud involving Russian government officials. In 2016, the US Congress expanded the act’s scope when it passed the Global Magnitsky Act, which blacklists anyone who has committed gross violations of human rights against anti-corruption activists or human rights defenders. So far, forty-four people have been blacklisted under the act.

Inspired by this act, Estonia’s parliament voted in December 2016 to bar any foreigners deemed guilty of human rights abuses from entering the country. In the United Kingdom, a significant safe haven of Russian oligarchs’ ill-gotten wealth, lawmakers are debating similar legislation.

Kara-Murza called the Magnitsky Act a more “effective and principled” approach to dealing with Russia.