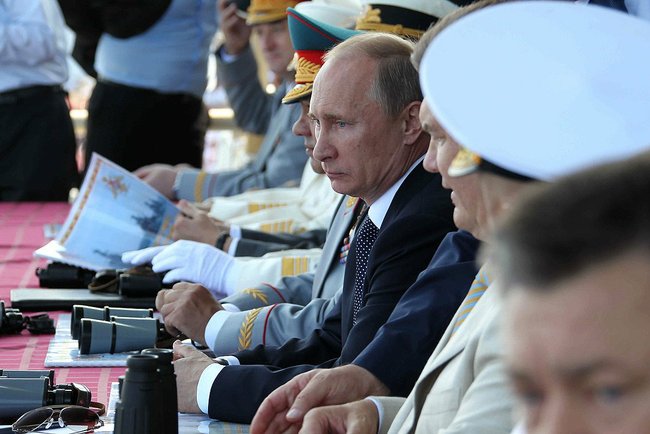 President Putin is striking back and playing for keeps in Ukraine. After losing his lever of control over Ukraine when the pliant and dependent former President Viktor Yanukovych fled to Russia, Putin is seeking to regain his leverage by dismembering Ukraine.

Putin has been consistent in pursuing a strategy to prevent nations that once made up the Soviet Union from fully leaving Moscow’s orbit. The classic Putin playbook is now on display:  fuel separatist sentiments, justify military action by asserting the need to protect ethnic Russians (or at least passport holders), and then “maintain the peace” by stationing Russian forces permanently. In effect, dismember your weak neighbors.

The obvious result is that Moscow gains leverage over any recalcitrant neighbor by pounding home the  message that permanent dismemberment is the cost of soliciting NATO membership and, as Moscow has made clear since last year,  the European Union as well. In turn, Moscow succeeds in making its neighbors undesirable partners as Europeans perceive them as carrying the baggage of regional, ethnic disputes which are unwelcome in the EU. Western reluctance to embrace nations with territorial disputes only incentivizes Russia to make its stationing of forces in that nation permanent.

This is the manipulated cycle of negativity that keeps nations of the former Soviet Union tethered to Putin’s authoritarian kleptocracy.

Unfortunately, Putin has concluded from recent history that Russia can not only get away with this strategy, but that it is effective. And now we are watching it unfold in Ukraine, centered on Crimea.

Consider what it is like to live in Putin’s neighborhood. Russia finances the separatist regime in the Transnistria region of Moldova and ensures its viability through the stationing of Russian forces. Russia fully occupied South Ossetia and Abkhazia in 2008 and now recognizes both Georgian territories as independent states – despite the fact that South Ossetia is nearly depopulated with the blatant exception of the influx of Russian forces. And even Armenia and Azerbaijan, who fought a war over Nagorno-Karabakh.  find their conflict suits the Kremlin just fine, providing the Kremlin leverage over both.

In Europe’s East, only Belarus, does not suffer the indignance of having territory occupied by Russia. And Belarus enjoys this unique status because its authoritarian kleptocrat Aleksandr Lukashenka has made Belarus anathema to the rest of Europe.

Since the mobilization of Russian forces in the Western and Central military districts last week, Putin has been testing. He is probing with each escalatory step he takes. This is a repeat of the lead up to war in 2008, when the US and European governments saw all the ominous signs, but had begun to expect outrageous Russian behavior as normal, without believing that Russia would ever resort to war. We were wrong.

If Putin concludes he can get away with it, he may not only move to wrest Crimea from Ukrainian control, but perhaps all of eastern and southern Ukraine, and then he may aim for another prize, toppling the new reform-minded government in Kyiv.

That’s why US and European actions, or inaction, in the next 24-48 hours may be decisive in Putin’s calculations.