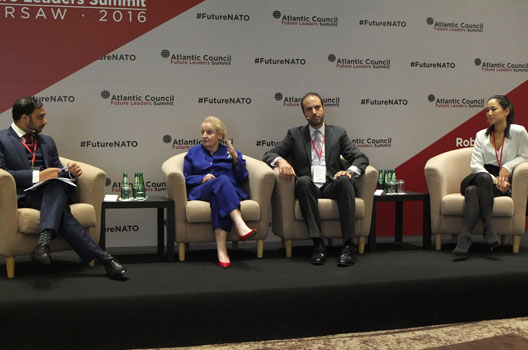 From left: Muddassar Ahmed, managing partner at Unitas Communications, moderated a discussion with Madeleine K. Albright, a former US secretary of state; Mohammed Ghanem, director of government relations at the Syrian American Council; and Anna Mee Allerslev, mayor of employment and integration of Copenhagen, at the Atlantic Council’s Future Leaders Summit in Warsaw on July 7. (DG ART Projects | www.dgart.pl)

Russia is exploiting the migrant crisis facing Europe with the goal of destroying the European Union, according to Madeleine K. Albright, a former US secretary of state.

“The United States has felt that it is important to talk to the Russians about Syria and try to figure out whether there are places that we can find some agreement…The Russians have used the refugee crisis to accomplish something that, I think, is in [Russian President Vladimir] Putin’s desires, and that is to destroy the European Union,” said Albright, an honorary director on the Atlantic Council’s board.

On June 23, the United Kingdom voted to leave the European Union in a so-called Brexit referendum. The ongoing migrant crisis fueled support for the Leave camp in the lead-up to the vote—whose chief campaigners claimed that the EU has reached a “breaking point” in dealing with migrant flows. Analysts have pointed to the Brexit result as a catalyst for other European countries—particularly in Eastern Europe—to hold EU membership referenda.

Europe is dealing with the largest movement of people across its borders since World War II. Since 2015, more than one million migrants have arrived in Europe via sea and more than 34,000 via land. A majority of the migrants are fleeing conflicts in Iraq, Afghanistan, and Syria.

In March, a controversial deal was negotiated between Turkey and the European Union that set out to relieve pressure from the crisis on Europe—for every Syrian migrant sent back to Turkey from Greece, a Syrian migrant already in Turkey will be resettled in an EU country. That number has been capped at 72,000.

The migrant crisis stands as a defining challenge for Europe. Concerns surrounding integration of refugees into European societies and terrorist attacks in Paris and Brussels in the past year—for which the Islamic State of Iraq and al-Sham (ISIS) has claimed responsibility—have spurred isolationist sentiment among European leaders and strengthened far-right political narratives across the Continent.

“Refugees are not the ones that [Europe] should fear, it is those who drive them out of their homes who endanger [European] security,” said Ghanem, referring to ISIS and military forces in Syria.

“Politicians who favor reduced EU unity and cohesion and closer ties to Russia are surging, even though Russia is escalating its threats and actually expanding its military operations on NATO’s southern and eastern flanks,” he added.

The panelists called on NATO and European institutions to reform and adopt new policies to address the long-term consequences borne out of the migrant crisis and to prioritize a resolution of the Syrian conflict.

“We are all acting as if the migrant crisis is a short-term emergency that will end quickly. It is not. It is a much longer-term problem…institutional structures have to adapt to that to have the best possible ways of dealing with [the migrant crisis],” said Albright.

Ghanem said that for most of the Syrian conflict, now in its sixth year, “there has been a gap between the daily misery faced by us, faced by Syrians, and what we could call the high politics of European and NATO countries.”

“Dealing with the vacuum that we have in Syria, dealing with the failed state, and ensuring that people have better security conditions, I think, is the most effective way to approach the [migrant] situation,” he added.