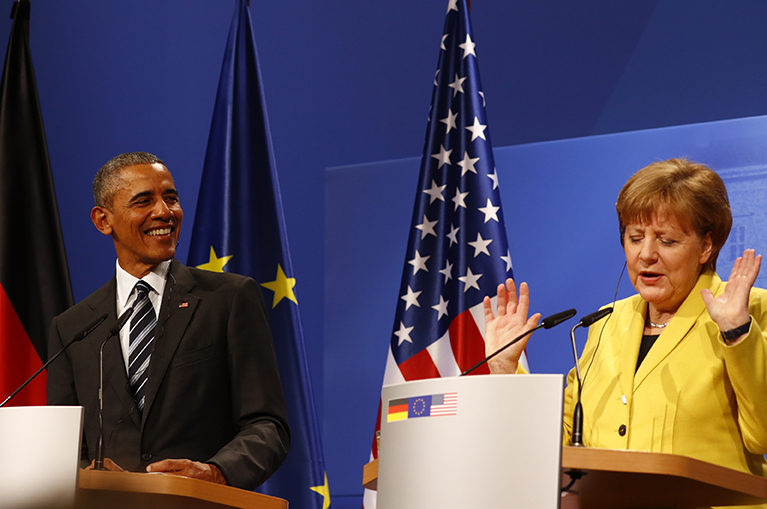 A transatlantic trade deal, currently being negotiated by the United States and the European Union, is critical to improving existing standards on issues such as public health, environmental regulations, and labor and safety issues, according to a new Atlantic Council report.

“TTIP holds the promise to boost the transatlantic economy and give new strength to the EU-US partnership,” Andrea Montanino, Director of the Atlantic Council’s Global Business and Economics Program and Earl Anthony Wayne, a Nonresident Senior Fellow in the program, conclude in their report, Ten Arguments for TTIP and the Concerns to Address.

“The vigor [the Transatlantic Trade and Investment Partnership] can give to this partnership will resonate in the international trading system and with the two economies’ other economic partners,” they write. Furthermore, it can “send a message to Europe that the US commitment to the relationship is much more than NATO’s, and it can remind the US public of the importance of the transatlantic economic relationship for US prosperity.”

This ringing endorsement for TTIP comes at a time when negotiations on the deal have become mired in economics as much as in politics. TTIP has lost public support as negotiations between the United States and the twenty-eight-member European Union have been protracted. A recent survey found support dwindling in Germany and the United States; France has threatened to end negotiations if there is no progress; US President Barack Obama—the main champion of the partnership—is nearing the end of his presidency; and a June 23 referendum on whether the United Kingdom will remain part of the European Union is looming.

In such an environment, it is likely that TTIP will be put on hold, said Montanino, adding that this will “be a mistake.”

Andrea Montanino and Earl Anthony Wayne discussed the significance and prospects of TTIP in an interview with the New Atlanticist’s Ashish Kumar Sen. Here are excerpts of the interview.

Q: A new survey shows dwindling support for TTIP on both sides of the Atlantic—in the United States and Germany; France has threatened to halt further talks barring progress in negotiations; electoral calendars need to be considered in the United States as well as in Europe; and a Brexit vote is looming. Is TTIP in crisis?

Montanino: I don’t think it is, yet. It’s a long negotiation, which is difficult because you negotiate between one country—the United States—and twenty-eight countries on the other side. They need to find an agreement among themselves before bringing something to the negotiations with the United States. The whole process is very complicated.

I think the electoral cycles will play a role because is it not just presidential elections here, but the French elections in April 2017, the German elections in fall of 2017. In both cases TTIP cannot be an argument during the electoral campaign because it is too sensitive. We also have the threat of a Brexit. So I think TTIP will be put on hold, which will be a mistake.

Wayne: This is the time for the negotiators to lean forward and hammer out solutions and for those who understand the real potential value of a successful TTIP to double their efforts to get the facts and the major potential gains out before [public audiences] on both sides of the Atlantic.  That is why we try to make clear in our paper ten big reasons that TTIP should go ahead and why a number of the criticisms of an agreement need to be effectively countered.

Q: US Trade Representative Michael Froman said in an interview with the Financial Times that European leaders “need to provide the kind of political impetus necessary to break through on some of these issues.” Why are European leaders not stepping up to the plate?

Montanino: There is, to me, still a lot of fear about the reaction of the public EU states. The mistake most people are making is not looking at the big picture, but looking at the details. Of course, when you look at the details you can get a better agreement, but if you look at the big picture, there is an opportunity to create a free-trade area between the two largest economies in the world—Europe and the United States—which does not just help companies do business, but you also start setting new standards based on the best practices of the United States and the EU. Standards that can come out of this kind of agreement will be, by far, better for European consumers than standards coming from China. With the huge export power of China to Europe, the risk is that standards will become those set up in [Asia] rather than in Europe and the United States.

Wayne: Leaders on both sides of the Atlantic need to make clear the economic and strategic value of a successful TTIP negotiation.  These kinds of complex negotiations are always filled with challenging tradeoffs, difficult choices, and the need for creative solutions. Negotiators are better able to achieve breakthroughs when they know they have the full support of their political leadership to “get to yes.”  I hope leaders will send that kind of message now.

Q: What are the main sticking points and what will it take to overcome them?

Montanino: There is still a question about how you solve disputes between investors and states. In our report, we find that the number of these disputes are negligible. But there is still a fear that this is a big issue.

Another issue, for Europeans, relates to rule of origin of agricultural products. We, in Europe, are very passionate about our local cheeses, olive oils, and wines. We don’t like something called parmesan that is not produced in the two tiny provinces in Italy where it originates. It is something that the United States should understand. It is a matter of culture. Our culture is based on local products, not global products in agriculture.

Wayne: There are still a range of tough issues to work through, and both teams need to work urgently in the months ahead to identify landing zones and narrow differences.  This will demand creativity and a very rigorous negotiating timetable, as well as a clear sense that their bosses want an agreement.

Q: Are there any issues that you believe are insurmountable and that negotiators should consider trimming with the goal of at least getting a “TTIP light” within the next few months?

Montanino: It is important to get at least a TTIP light and have an open agreement that would allow for continuous negotiations. The best response to an eventual Brexit would be a meeting of leaders in Brussels the day after the referendum announcing that negotiations for TTIP are closed. It may not be a perfect TTIP, or all inclusive, but at least it would be a start. It would show that Europe continues to work for more integration with the United States and to deepen our economies.

Wayne: Both economies can benefit greatly from the boost that a serious TTIP can bring. Services liberalization, for example, has a great potential to unleash growth across the Atlantic, as do a range of measures that can make it easier for small and medium size enterprises to engage in more transatlantic commerce, as our paper makes clear.  The kind of understandings about how regulators will work together under a TTIP also can bring tremendous benefits over many years on both sides of the Atlantic, while solidifying mutual goals to provide the best norms, standards, and regulations to protect our citizens. This can serve as a valuable model for other countries in bilateral, plurilateral, and multilateral negotiations and forums.

Q: What is the likelihood that negotiators will agree to a consolidated text by July—leaving enough time for the deal to be wrapped up while President Obama is still in office?

Montanino: This can happen. It depends on whether the negotiators decide to leave aside the most sensitive issues. If they do so, they have a consolidated text. Ratification is a completely different thing. I think the ratification process will be extremely difficult both here and in Europe—here because Congress will never ratify anything before the administration assumes office and in Europe because the deal will have to go through multiple parliamentary approvals.

Wayne: I am not sure. There is still much to do. A lot of momentum is needed.  What we seek to make clear in our paper is the great value to both the US and the EU of reaching agreement and thus the need to work energetically for agreement.

Montanino: TTIP is not about tariffs, it is about regulations, setting common standards, and working for common approaches. If American leaders, whether it is Donald Trump or Hillary Clinton or someone else see this in a more strategic way I think it can be possible. If not, it will be a missed opportunity that might be costly to both the United States and Europe—not just in economic terms, but also in terms of deeper relations between the two sides of the Atlantic.

Wayne: I think our paper lays out the reasons that a US-EU agreement, between two partners with a massive trade and investment agreement and with tremendously sophisticated regulatory systems and high standards, is in the economic and strategic interests of the United States.

Q: What is the cost of failure to pass TTIP?

Montanino: First, it would make the relationship between the United States and Europe more difficult. Second, it would be a huge cost for SMEs (small and medium-sized enterprises) on both sides of the Atlantic that want to trade because the regulatory barrier is more relevant for them, much more than tariffs. Most SMEs cannot afford to pay lawyers and tax accountants if they want to do business in the United States. And third, it would put countries—and I am referring particularly to China—in a position that we will have to adapt to their standards because their costs are so low and consumers will start buying, even more so than now, Chinese products jeopardizing our firms.

Wayne: Both sides of the Atlantic would lose an opportunity to boost their economies at a time when more economic growth is needed. We would also miss an opportunity to help set global best practices and to shape future global rules. We could be yielding that opportunity to others that perhaps don’t share our commitment to high standards. It would also be a missed opportunity to strengthen transatlantic partnership and leadership.

Q: What impact would the United Kingdom’s exit from the EU have on TTIP negotiations? Would Britain out of the EU be included in a TTIP?

Montanino: I don’t think anybody knows the answer to that question. The way a country can leave the European Union is totally unclear. Article 50 of the Lisbon Treaty says that after a referendum a country has two years for negotiating an exit. How this negotiation will take place, how the trade relationship will be regulated between the UK and the rest of Europe, and how the UK can continue to negotiate on TTIP is completely unclear. That creates a lot of uncertainties, and Europe doesn’t need more uncertainties right now.