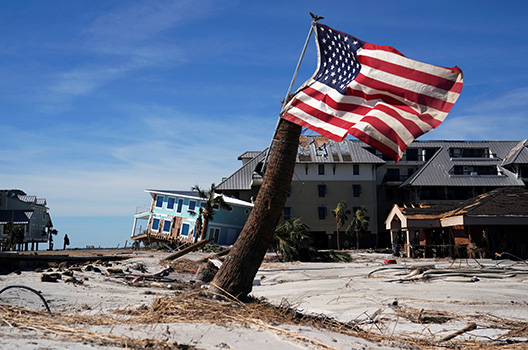 Eighty-three hours before making landfall on October 10, the storm that would eventually become Hurricane Michael had sustained winds of less than 30 mph. Four days later, it devastated the Gulf Coast. With 155 mph winds, Michael was one of the most powerful storms to ever strike the United States. This process of rapid intensification just offshore has also occurred in three of the four most destructive storms to hit the country (see graphic).

A hurricane rapidly intensifying immediately before making landfall poses a unique and urgent threat. Systematically building resilience to account for these conditions—with hours, not days to prepare for a storm—is critical. Improving the ability of forecast models to provide greater warning of rapid intensification would certainly benefit coastal communities in preparing for such storms. Nonetheless, at least in the near term, relying on such technical advances may be unrealistic. Resilient-by-design approaches—whether in terms of helping individuals ready themselves, developing infrastructure that is better able to weather major storms, or encouraging institutions to plan and make associated investments in a more strategic, structured way—will help systems better withstand these kinds of shocks and reduce the need for ad-hoc, last-minute efforts.