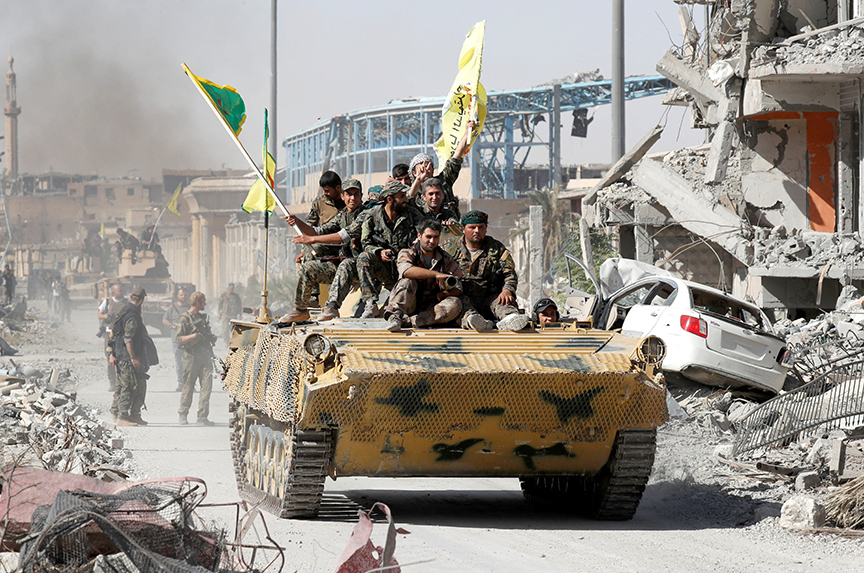 As the Islamic State of Iraq and al-Sham (ISIS) is driven from its strongholds in Syria, US-backed forces face the challenge of stabilizing these conflict-ravaged territories.

This task is made more urgent by the fact that Syrian President Bashar al-Assad’s forces and Iran-backed militias are swooping in on eastern Syria in an attempt to capitalize on ISIS’ defeat, said Frederic C. Hof, director of the Atlantic Council’s Rafik Hariri Center for the Middle East.

“If they succeed, the basis for ISIS 2.0 will be set,” said Hof, adding: “After all, it was the Iranian (and Russian)-supported brutality of the Assad regime that created the governance vacuum filled by ISIS in the first place.”

The US-backed Syrian Democratic Forces (SDF) said on October 16 that they had seized control of Raqqa, the de facto capital of ISIS’ “caliphate.” A US-backed civilian council, which has been based in Ayn Issa, north of Raqqa, will now seek to stabilize Raqqa.

“The challenge, of course, is post-conflict stabilization, the removal of [improvised explosive devices] IEDs, and the inevitability of having to deal with an ISIS-led insurgency and external pressure from the regime, Iran, and Russia on the SDF to make concessions,” said Aaron Stein, a resident senior fellow in the Hariri Center. “In short, there is a still a lot of work to be done, despite the successful campaign to retake the city,” he added.

Rashad al-Kattan, a nonresident fellow in the Hariri Center, said that the “euphoria [related to the fall of Raqqa] can quickly evaporate as the challenges are immense for stabilization efforts there, especially after the very high cost the city and its residents had to pay in terms of destruction and displacement.”

A new layer of complexity

The already complex task of post-ISIS regional stabilization may have been made harder by developments this week in Iraq where government security forces clashed with Kurdish Peshmerga and seized the oil-rich city of Kirkuk. Kurdish forces had controlled Kirkuk since 2014 when Iraqi forces fled as ISIS advanced on the city.

Across the border in Syria, the Kurdish YPG (People’s Protection Units) joined with the SDF to take Raqqa.

“The SDF, especially its main constituent the YPG, are likely looking east of the [Syrian] border at what has been unfolding between Erbil and Baghdad, and how the [Kurdistan Regional Government], a US ally, have been left alone (so far) with no support as Iraqi security forces and Iranian-backed Shi’a militias started rolling back their territorial control back to how they were in 2003,” said al-Kattan.

The United States has urged calm between its two allies—the Iraqi government and the Kurdish Peshmerga, but US President Donald J. Trump refused to take sides.

Why does Raqqa’s fall matter?

Raqqa has been ISIS’ de facto capital for the past three years, but the strategic importance of the city has diminished as ISIS started to lose territory, particularly the city of Mosul.

“Over the past several months, the leaders of ISIS in Syria have known that Raqqa would be a lost cause: that the Kurdish-led Syrian Democratic Forces—with American air support—would ultimately prevail,” said Hof.

“The leaders abandoned the place, leaving its defense to those recruited to give their lives to a movement rooted in violent criminality,” he added.

Those militants put up a fierce fight as the SDF closed in on Raqqa.

Al-Kattan said while Raqqa had fallen, a couple of hundred foreign ISIS fighters remain in the city after a deal was struck to extricate local ISIS fighters and their families from the city to speed up its liberation.

“The fighting in Raqqa was intense and many died to take the city. The United States and its coalition partners played a significant role, but the SDF were the ones going building-to-building to clear Islamic State from the city,” said Stein, adding, “This is a significant victory for the coalition and the SDF.”

Hof, however, noted that it has taken the United States and its local partners three years to take control of Raqqa. “It is regrettable that it has taken this long: ISIS has been able to plan terror operations in Raqqa and has killed Turks and Western Europeans in large numbers because of the time it has had to do its worst,” he said.

Will the fall of Raqqa hurt ISIS’ ability to find recruits and inspire acts of terrorism?

“Given that ISIS has become something of a loose, franchise operation in the Middle East and North Africa, it is hard to draw a direct relationship between the fall of Raqqa and the ability of ISIS to recruit and inspire acts of terrorism,” he said.

“Many people drawn to ISIS are self-recruited: often petty criminals from backgrounds of abuse and failure seeking a glorious way to exit the cares of a difficult world,” he added.

ISIS, which once controlled vast swathes of territory across Syria and Iraq, has been rolled back by a US-led coalition. Today, ISIS elements operate in eastern Syria and in the valley of the Euphrates River near Iraq.

“Clearly the pretense of governing a ‘caliphate’ in the sense of territory is disappearing for ISIS,” said Hof. “This pretense is what separated it from its al Qaeda in Iraq origins: it now faces the likelihood of being extinguished militarily in both Iraq and Syria.  But the basic nature of the movement—self-serving criminality (murder, theft, rape, etc.) with an overlay of Islamism—will continue to appeal to marginalized individuals in the Sunni world.  Some of these individuals will, whether self-recruited or inspired through the internet, seek opportunities to commit atrocities and suicide simultaneously,” he added.

Image: Syrian Democratic Forces (SDF) fighters rode atop a military vehicle as they celebrated their victory over the Islamic State of Iraq and al-Sham (ISIS) in Raqqa, Syria, on October 17. (Reuters/Erik De Castro)