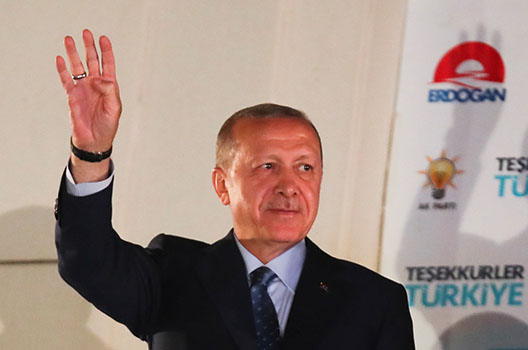 Turkish President Recep Tayyip Erdoğan’s reelection on June 24 ensures that “he will be master president at least until 2024, if not longer,” according to Aaron Stein, a resident senior fellow at the Atlantic Council’s Rafik Hariri Center for the Middle East.

Erdoğan will assume new powers as president following his successful campaign to change Turkey’s constitution in 2017. His new office of executive president will have much greater control over policymaking, with Turkey’s parliament, the Grand National Assembly, relegated to a more junior role.

“While not unexpected, [Erdoğan’s victory] is a validation of the political project he has embarked upon for at least a half decade,” said Stein.

In elections for the Grand Assembly, a coalition of Erdoğan’s Justice and Development Party (AKP) and the far-right Nationalist Movement Party (MHP) won fifty-three percent of the vote, securing control of the chamber. The main opposition coalition, the National Alliance, won thirty-three percent of the vote, while the HDP won more than eleven percent, surpassing the ten-percent-threshold needed to ensure representation in the National Assembly.

Aaron Stein discussed the implications of the Turkish elections in an interview with New Atlanticist’s David Wemer. Here are excerpts from our interview:


Q: What is the significance of President Erdoğan’s victory?

Stein: This was the first election for the new executive presidency. [Erdoğan’s] victory as president, while not unexpected, is a validation of the political project he has embarked upon for at least a half decade. We are about to see the radical re-altering of the Turkish government and the formalization of the consolidation of power in the office of the presidency.

Q: How important was avoiding a runoff for Erdoğan?

Stein: He was the odds-on favorite to begin with. The only way the opposition—loosely-defined—could have beaten him was the stars aligning perfectly. He had to be feeling pretty comfortable going in. Where he wasn’t feeling very comfortable was in parliament. I think that was the story of the election.

Although, before going into [the election], there were general whispers and murmuring that the presidential election could test his legitimacy, particularly if allegations of fraud proved to be correct and decisive in swinging the vote. That didn’t happen as far as we know. Therefore, by getting a couple of percentage points above fifty, he has put that legitimacy question to rest and has a clear mandate from the electorate to consolidate power under his office.

Q: Erdoğan’s conservative coalition partner, the MHP, achieved a better-than-expected result of eleven percent in the parliamentary elections. What is the significance of their showing?

Stein: That is the story of the election. Observers, including myself, thought going in that if the HDP won greater than ten percent, and at the presidential level you had greater than thirty percent for Muharram Ince, we were probably headed for a [presidential] runoff. We also would be waking up on June 25 with the AKP/MHP coalition having lost its majority. MHP holding steady took everyone off guard. There was one poll towards the end of the race—an AKP internal—that had them at eight percent. Their performance was unexpected. Together [AKP and MHP] control 344 seats in the parliament, putting them forty-three seats above the 301 needed to impose even the very light checks [on the president] that are written into the new constitution. It shouldn’t be overlooked that the AKP got 295 seats itself. Even though it lost about seven percentage points from its comparative total from the last national election, it is still only six seats short of the new minimal threshold needed to have a majority. Even though they lost a lot of votes, they nevertheless emerged in pretty good shape.

Q: The pro-Kurdish Peoples’ Democratic Party (HDP) surpassed the ten percent threshold needed to be included in parliament. What is the significance of this?

Stein: This is the third election in a row where [HDP] is the third-largest party by seats. They are a political force. It is difficult to wish them away. They have remained stubbornly above ten percent, despite what has basically been two and a half years of sustained combat operations by Turkish armed forces in southeast Turkey, Iraq, and Syria. Their leader, Selahattin Demirtaş, remains very popular with the [HDP] base, even though he campaigned from a prison cell.

Now there is the dominant bloc, AKP and MHP, which is inward oriented and nationalist, the CHP as the buffer in between, and HDP as the third-largest bloc. That is going to be an interesting dynamic to watch. That bloc of opposition to Erdoğan, the People’s Coalition [of CHP, HDP, and the smaller nationalist IYI party], I bet will not be able to sustain this anti- Erdoğan unity that got them through election cycle, because some political schisms about the role of the HDP will start to come out.

Q: Prior to the election, the Turkish opposition seemed to be more united after the 2017 constitutional referendum. Despite this, they still did not get Erdoğan to a runoff or prevent an AKP-MHP parliamentary majority. Where does the opposition go from here?

Stein: There is still the Erdoğan factor. These parties’ leaders, [IYI’s Meral] Akşener, Ince, and Demirtaş are, for now, united in opposition to Erdoğan. But more broadly, what is the role of parliament now in this system? If you had a cohabitated government, parliament would have had a clearly defined role to just be opposition and block—they would have been railroaded eventually—but they would have slowed [Erdoğan] down and prepared for the March 2019 municipal elections. Now, early indications from CHP, particularly Ince, are that focus should be on getting the message right for 2024—an election five years in the future.

It is also not entirely clear how the state will be reshaped. It will be radical. A lot of it still needs to be written into law, as we only have the general outlines of the constitution. Erdoğan will be in the center, with orbiting ministries around him, but how that all works legislatively is what I think will define Turkish politics for the next year or two.

Q: What will be Erdoğan’s first priorities in his new term?

Stein: He has to divide the spoils. He has to figure out which ministries can MHP loyalists be safely placed into without jeopardizing his own control of government and policymaking authority. He needs to remake government, consolidating these ministries.

By all accounts, Turkey is heading for difficult economic times, so he will need to balance getting the economy right with the need to sustain high growth levels for his own constituencies. He will also begin to gear up for the March 2019 municipal elections. One of the main instruments of AKP power in Turkey is control of municipal services in Istanbul and Ankara. They will want to maintain control of those two cities. They wobbled a bit in the referendum, but they have regained momentum in the elections last week. But Istanbul went fifty percent for the coalition and Ankara only slightly over that. These are numbers that can move, especially with an economic problem coming. But let’s not overstate it: Erdoğan is in a good position. He will be master president at least until 2024, if not longer.