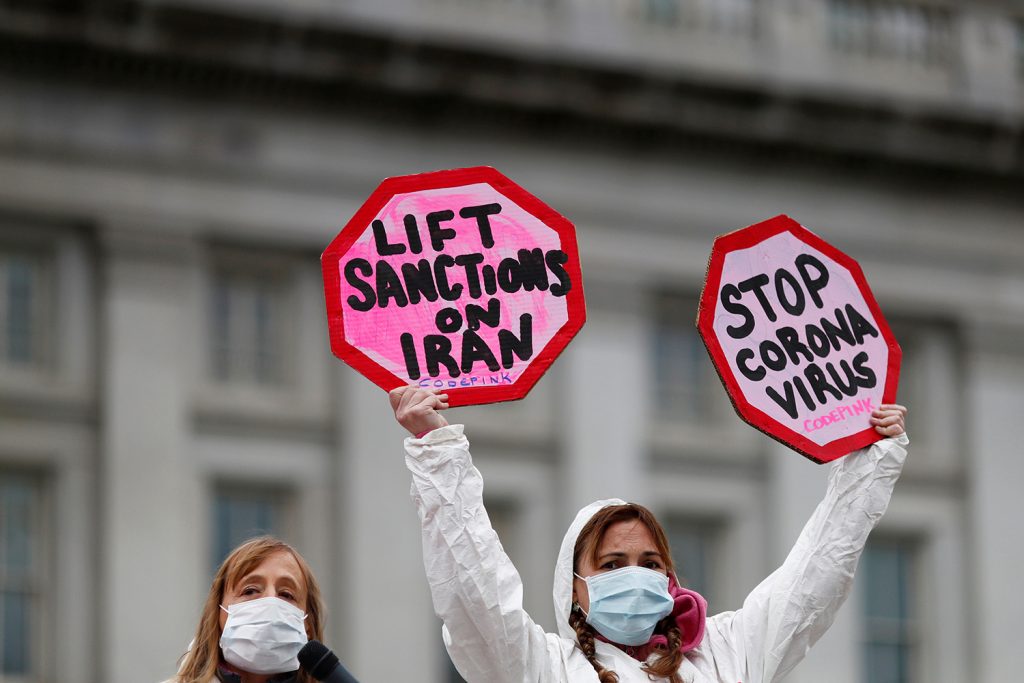 It is no surprise that the Trump administration’s sanctions policy has been under fire since the outbreak of the global pandemic of novel coronavirus (COVID-19), accused of doing unjustified humanitarian damage. After all, the maximum pressure sanctions campaigns had already been the target of significant push back from allies and foes alike, and the administration did not seem terribly concerned with humanitarian impact in its previous actions. Those sanctions campaigns, however, came amidst a decade of economic expansion and relative stability. As the world economy shuts down to try to contain the COVID-19 outbreak, the humanitarian collateral effects of sanctions become more pronounced and potentially deadly.

Michelle Bachelet, the UN High Commissioner for Human Rights, last week called on the Trump administration to ease or suspend sanctions, one of several such pleas. She was joined in her call by UN Secretary General Antonio Guterres, academics, and the Washington Post Editorial Board, among others.

US Secretary of State Mike Pompeo’s dismissed this criticism, asserting that “sanctions do not target imports of food, medicine, and medical equipment, or other humanitarian goods.” That is true in a narrow technical sense, but is not an adequate answer. Broad-based sanctions on a jurisdiction disrupt all trade, even that, like humanitarian trade, which is technically carved out. This is a reality that all administrations must contend with when considering whether to impose significant sanctions. Policymakers habitually look for options that are all gain without difficult trade-offs; they seldom exist.

The humanitarian crisis in Iraq in the 1990s under the UN Oil-for-Food program—Iraqis starving because of the embargo while Saddam Hussein and his cronies got rich through massive international bribery—dealt a significant blow to the use of sanctions as a foreign policy tool. Today, Congress mandates that all jurisdictional sanctions programs contain carve-outs for the export of food, medicine, and medical devices, but just because those exemptions are there does not mean that exporters are able or willing to make use of them.

But the argument that the United States should unilaterally roll back sanctions draws a false dichotomy; sanctions do not have to be suspended or rolled back for the United States to better address humanitarian concerns. Several members of the House of Representatives have hit closer to the mark in letters to Secretary Pompeo that advocate for expanded access to humanitarian goods and a pause in new sanctions. That is a better approach: to deal with humanitarian problems, address the specific problem directly.

First, the United States should not wrap itself in guilt over imposing sanctions. Iran, North Korea, Syria, and other sanctioned jurisdictions were sanctioned for good reasons. Their actions make them a continued threat to the United States and the global community even in a global pandemic, and it is not practical, and even less wise, to formally lift sanctions that constrain bad behavior. I have little doubt that North Korea, for example, would take advantage of any broader reprieve to advance its weapons program while letting its citizens bear the brunt of the disease. Is it credible to believe that Venezuela’s Nicolas Maduro would respond to a unilateral lifting of sanctions by standing down from internal repression, leaving power, and moving back toward democracy?

Instead, sanctions should be held steady while the United States eases the ability to conduct humanitarian transactions, facilitates such transactions itself, and encourages the world to use those conduits. Good sanctions policy (that can sustain broad international support) does not include letting people die because their governments are ill-prepared, corrupt, or repressive.

One can debate the Trump administration’s approach to Iranian sanctions. But even here there is room to open up space for humanitarian support. Esfandyar Batmanghelidj of Bourse & Bazaar, gets most of the main points right vis-à-vis  Iran in calling for expanded medical device carve-outs, US government comfort letters to foreign banks processing such transactions, and easing access to Iran’s foreign exchange for the express purpose of facilitating humanitarian trade.

Expanding medical device carve-outs is probably the most critical because important items for the fight against COVID-19 may not be included in the current exemptions; respirators require separate, specific authorization from the US Government, which can take months to get, if not longer. Beyond just issuing more comfort letters, the Trump administration should roll back the draconian requirements for providing them that were put into place in October 2019. The requirements for US government comfort letters are excessive and overly burdensome, especially for goods that are not sanctionable; they serve to do little more than inhibit such trade. The United States should also pledge not to veto an Iranian loan from the International Monetary Fund to purchase humanitarian goods (assuming sufficient oversight to prevent diversion) and assist the country in trying to combat the pandemic that has overwhelmed the nation.

Finally, the Trump administration needs to stop imposing new sanctions on Iranian networks of marginal strategic value and thus minimal actual impact. The give with one hand and take away with the other approach it employed in offering humanitarian support to Iran and then following up with several rounds of new sanctions does not improve the humanitarian atmosphere, especially for a jittery financial sector that is critical to facilitating such trade. A pause on new designations will not lead to Iran procuring more hard currency with which to conduct nefarious activity, especially when the bottom has dropped out of oil prices. A pause instead would help pave the way for greater humanitarian trade with Iran and could help build credibility with EU allies and others who are furious with the Trump administration’s actions on Iran.

The above Iran-specific recommendations reflect some broad themes for facilitating humanitarian trade with other jurisdictions with significant sanctions, although the specifics of each situation will vary. The one other consistent issue these jurisdictions will face are challenges with remittances, which are authorized in all programs but subject to certain restrictions that may impact individuals who need funds to pay for medical treatment.

A country famous for its doctors, Cuba likely has some available expertise to deal with the COVID-19 pandemic. But nearly sixty years of orthodox communist economics and embargo by the United States has laid waste to Cuba’s infrastructure, and it is likely that the country will need external supplies of items like respirators. Unlike some of the other jurisdictions, the ability of the United States to help supply such items (when the United States finally starts making enough) may be critical, given the proximity of the two nations. Finding funds for such purchases may also be a challenge, and the United States should be proactive in working with International Financial Institutions like the Inter-American Development Bank to support Cuba, if needed. In addition, the US government should move quickly to remove the overly strict limits on personal remittances for COVID-19 related transactions, as those caps could harm ordinary Cubans during this outbreak and do little to pressure the regime.

The Kremlin claims Ukraine’s Crimea region as its own territory, placing Crimea in a different category than the other sanctioned jurisdictions. Russia is likely to have some struggles with COVID-19 given its poor infrastructure, and these may extend to the Ukrainian territories it currently occupies— including the Donbas region in eastern Ukraine, which is not currently subject to jurisdictional sanctions, but where the de facto “governments” are themselves sanctioned. It should not prove too difficult to support humanitarian shipments to Russia should it request them. However, ordinary people in Crimea may face challenges, as most banks operating solely on the peninsula are sanctioned and cannot receive otherwise authorized remittances.

We may never know the actual toll that COVID-19 takes in North Korea, given the isolationist regime’s secretive and repressive policies. Reports indicate that US President Donald J. Trump sent North Korean leader Kim Jong-un a letter offering cooperation on the pandemic. Setting aside the wisdom of doing so before the United States was prepared to deal with the virus, Trump’s gesture was the right one. It may be very difficult to figure out how to get critical equipment to a country that routinely rejects food aid during famines, but the US government should be proactive and look for opportunities to help the North Korean people if they exist. Similar to Cuba, the Trump administration should consider removing the cap on remittances to North Korea for COVID-19 transactions.

Sadly, it is hard to see how help could be readily delivered to the neediest parts of Syria, even if the United States were to be more proactive. A war zone is simply a poor environment for health care, even without factoring in that the Bashar al-Assad regime and its Russian enablers have targeted hospitals in rebel-controlled areas of the country. The United States should stand ready to help should Assad request such, nonetheless.

Finally, the Trump administration faces a quandary in Venezuela. Sanctions target the majority of the revenue-producing economy via a blocking of all state-owned enterprises, which has exacerbated an already precarious humanitarian situation. Venezuela is ill-equipped, to put it mildly, to handle a COVID-19 outbreak, primarily due to years of mismanagement and corruption. The Trump administration’s initiative announced March 31 to ease sanctions as part of a political transition in that country from the Maduro appears to reflect recognition of the need to respond to the humanitarian challenge and is a much more constructive approach than its recent consideration of designating the country as a state sponsor of terrorism. But the administration should de-link humanitarian support from the conditional sanctions easing it has in mind. Allowing the unfreezing of some state-owned assets for humanitarian purchases and a pledge to refrain from additional sanctions while the crisis is ongoing would be good first steps.

FATF blacklists Iran, but does it matter?

The decision to impose counter-measures by the Paris-based body signals something of an end to the group’s patience with Iran, especially by the European Union, after Tehran failed to follow through on the action plan it agreed upon with the FATF to address its deficiencies.

With President Donald Trump in the White House and Mike Pompeo as his Secretary of State, the US is determined to eject Iranian influence from Latin America.

Image: People attend a protest against the role that US sanctions plays on Iran and the exacerbation of the coronavirus disease (COVID-19) worldwide, as the World Health Organization said for the first time on Wednesday that it now sees the coronavirus outbreak as a pandemic, in Washington, US, March 11, 2020. REUTERS/Carlos Barria