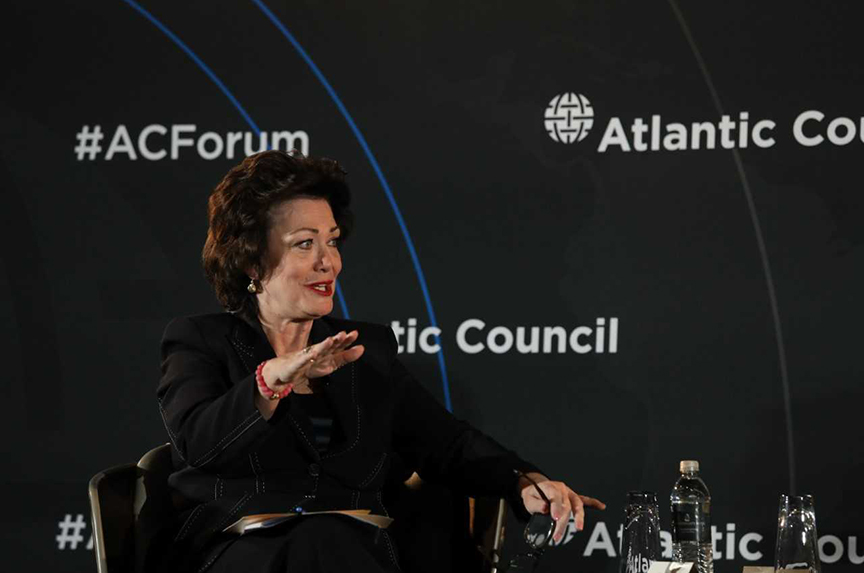 Ellen O. Tauscher was “a patriot, a politician, a transatlanticist, an Atlantic Council board director, a mentor to many of us…and above all a friend to many of us,” retired US Marine Corps Gen. James L. Jones, Jr., the Atlantic Council’s executive chairman emeritus, remembered on April 30. Tauscher, a seven-term California Democratic congresswoman and former undersecretary of state for arms control, passed away on April 29.

“She was a giant, a path-breaker, a role model, an anchor in turbulent times. Her legacy of stability is clear, her loss tragic. We will miss her terribly,” Pavel wrote.

“Ellen embodied the values of the transatlantic community and of the Atlantic Council — at their best,” Atlantic Council President and CEO Frederick Kempe recalled. “She was a force of nature, making all things she touched better through her passion, her purposefulness, and her intellect.”

“She contributed so much to our nation and our institution. Thank you,” he added.

Tauscher was a leading voice on nuclear weapons control and defense issues, serving on the House Armed Services Committee for more than twelve years, and chairing the Strategic Forces subcommittee. As undersecretary of state for arms control and international security affairs in the Obama administration, she played a leading role in negotiations with Russia to cement the New Strategic Arms Reduction Treaty (New START), which limited the allowable number of nuclear warheads, bombs, missiles, bombers, and launchers both countries could deploy.

In an interview with Politico, former US Secretary of State Hillary Clinton described Tauscher as “the most important person in getting us to the negotiation of the New START Treaty.” In negotiations with the Russians, Clinton said Tauscher showed a rock solid understanding of “the politics as well as the technology. … In my opinion, it would not have happened without her.”

Jones recalled that New START “was one of the highlights of my professional career to be able to work with Ellen from the White House on this crowning achievement of the Obama administration’s foreign policy.”

Former US Secretary of State Madeleine K. Albright, an Atlantic Council International Advisory Board member, remembered that “Ellen Tauscher was a gifted leader who broke barriers in the private sector and served with great distinction in Congress and at the State Department. I was proud to call her a friend and to see the difference she made as a leader, mentor, and foreign policy thinker.”

US House Speaker Nancy Pelosi (D-CA) said that “Ellen was an extraordinary force for progress who made a difference. To watch Ellen wield the gavel was to observe a masterclass in steady, steely leadership.”

US Sen. Diane Feinstein (D-CA) recalled that “Ellen had a practical and effective way with policy. She had a knack for getting to the bottom of an issue smartly but also in ways that people could really understand. She truly loved her country and it was an honor to work with her. She remains an inspiration for all of us in Congress and I hope younger members will look to her as an example to emulate. She’ll always be remembered.”

Jones, who spoke on April 30 at the Atlantic Council’s Distinguished Leadership Awards before presenting an award to NATO, also noted that Tauscher was “one of NATO’s most active advocates.” He said “Ellen would have instinctively understood why the Atlantic Council is offering its international leadership award this evening to NATO in recognition of the Alliance’s contribution to peace and security for so many decades.”

Rose Gottemoeller, NATO’s deputy secretary and another former undersecretary of state for arms control, speaking after Jones, called Tauscher “my boss, my mentor, and my friend.” Tauscher, Gottemoeller recalled, “truly was a great American and we will all miss her.”

“Ellen’s influence will live on far past her years on this earth,” Kempe said. “Her contributions to the United States and our international order will continue to inspire, educate, and guide our current and future leaders.”