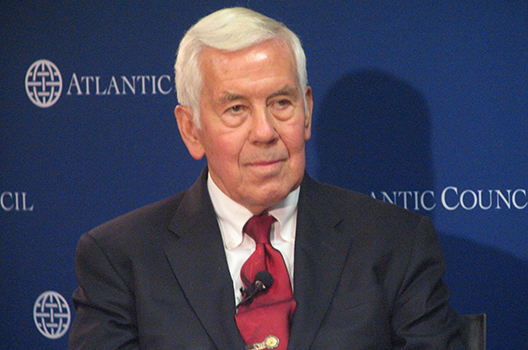 One of Washington’s most important foreign policy voices, US Sen. Richard Lugar “was an American jewel,” Atlantic Council Eurasia Center Director John Herbst recalled. Lugar, who spent more than thirty years representing Indiana in the United States Senate, passed away on April 28 at the age of eighty-seven.

The longest-serving senator in Indiana’s history, Lugar chaired the Senate’s Foreign Relations Committee twice—from 1985 to 1987 and 2003 to 2007—and was one of the Republican Party’s most important voices on foreign policy.

Lugar’s crowning legislative achievement was his work on nonproliferation, joining then US Sen. Sam Nunn (D-GA) in authoring the Cooperative Threat Reduction Program, which helped the former Soviet Union dismantle thousands of nuclear weapons and delivery systems. After his career in the Senate, Lugar founded the Lugar Center, which continues to work on nuclear nonproliferation, foreign aid, global food security, and bipartisan governance.

Former US President Barack Obama praised Lugar’s efforts in a statement after the senator’s passing: “Today, thousands of warheads, bombers, and submarines no longer threaten us because of Dick’s work. America is safer because of Dick; the world is too.”

I admired Richard Lugar for his creativity as a legislator, his commitment to bipartisanship, his record of public service & his civility as a human being. His legislation to safeguard nuclear materials stopped a nightmare from becoming reality. Our world is safer because of him.

Lugar was also a fierce advocate for the transatlantic relationship and emphasized the importance of growing the Alliance. He was a staunch advocate for NATO enlargement to Central and Eastern Europe and introduced the NATO Enhancement Act in 2012 to push for the membership of Bosnia and Herzegovina, Georgia, the future North Macedonia, and Montenegro. Speaking at the Atlantic Council in 2009, Lugar argued that “our continued commitment to NATO does not come without costs, but remains the most promising vehicle for projecting stability throughout Europe and its political fault lines with Asia and the Middle East.”

Atlantic Council experts react to the passing of US Sen. Richard Lugar. Here is what they had to say:

Neil Brown, nonresident senior fellow at the Atlantic Council. He served for over eight years for Senator Lugar on the Senate Foreign Relations Committee and is a founding board director at The Lugar Center.

“Senator Lugar drew from a bottomless well of compassion and optimism that enabled solutions when others only saw problems. He had an unrivalled ability to see threats over the horizon and build consensus around solutions across ideological and geographic borders. From injecting energy security to the core of US foreign policy, to NATO expansion for a more secure Eastern Europe, to preventing weapons of mass destruction from falling into the hands of rogue elements, to leading extractive industry transparency for citizens to make governments more accountable, Senator Lugar was an indefatigable leader, thinker, and bipartisan problem solver.”

Daniel Fried, distinguished senior fellow in the Atlantic Council’s Future Europe Initiative and Eurasia Center. In the course of his forty-year Foreign Service career, Fried played a key role in designing and implementing American policy in Europe after the fall of the Soviet Union.

“Senator Lugar combined personal modesty and understatement with strategic boldness and achieved great things. After the end of the Cold War, Senator Lugar forged a bipartisan coalition to bring in the newly-free Central Europeans into the great institutions of the West, starting with NATO. He consolidated freedom for 100 million Europeans, advancing US interests and values at the same time. He was a forger of a Europe whole, free, and at peace, a legacy worth celebrating.”

John E. Herbst, director of the Eurasia Center at the Atlantic Council and former US ambassador to Ukraine.​

“Dick Lugar was an American jewel. A politician who was all substance and no glitz. The work he did on removing weapons of mass destruction from the nations of the former Soviet Union was classic Lugar:  a smart, bipartisan solution (with Sen. Nunn) to a critical danger, but with a low public profile.

“I worked closely with Senator Lugar when he came to Kyiv to monitor what turned out to be the falsified second round of Ukraine’s 2004 presidential election. His censure of the vote and strong personal diplomacy with then-President [Leonid] Kuchma helped avert a stolen election. In Kyiv that year he reprised his 1986 role in helping resolve the electoral impasse in the Philippines.  We sorely miss today his wisdom and ability to work across the aisle.”

Richard L. Morningstar, founding chairman of the Atlantic Council’s Global Energy Center and former US ambassador to Azerbaijan and the European Union.

“I had the honor of working for many years with Sen. Lugar on global energy issues. He was a huge advocate of a successful bipartisan policy supporting the development of Caspian energy resources and transit routes. More than that, Sen. Lugar was a truly decent man. It is unfortunate that there are not more like him in today’s Senate.”

Alexander Vershbow, distinguished fellow at the Atlantic Council’s Scowcroft Center for Strategy and Security, a former deputy secretary general of NATO, and a former US ambassador to South Korea, Russia, and NATO:

“I deeply mourn the passing of Senator Richard Lugar. He was always a passionate advocate for arms reductions and non-proliferation. It was a great honor for me as ambassador to Russia from 2001 to 2005 to help implement the many initiatives sponsored by Senator Lugar together with Senator Sam Nunn that significantly increased the security of dozens of Russian nuclear facilities, dismantled hundreds of nuclear missiles, launchers and warheads, eliminated tons of material for nuclear, chemical and biological weapons, and re-employed thousands of weapons scientists in civilian pursuits. It was inspiring to testify alongside Senator Lugar just two months ago before members of the House Armed Services Committee on ways to mitigate the impact of the demise of the Intermediate-range Nuclear Forces Treaty. On that occasion, Senator Lugar made an eloquent appeal for continued US leadership on arms control that, I hope, will be heeded by the Trump Administration.