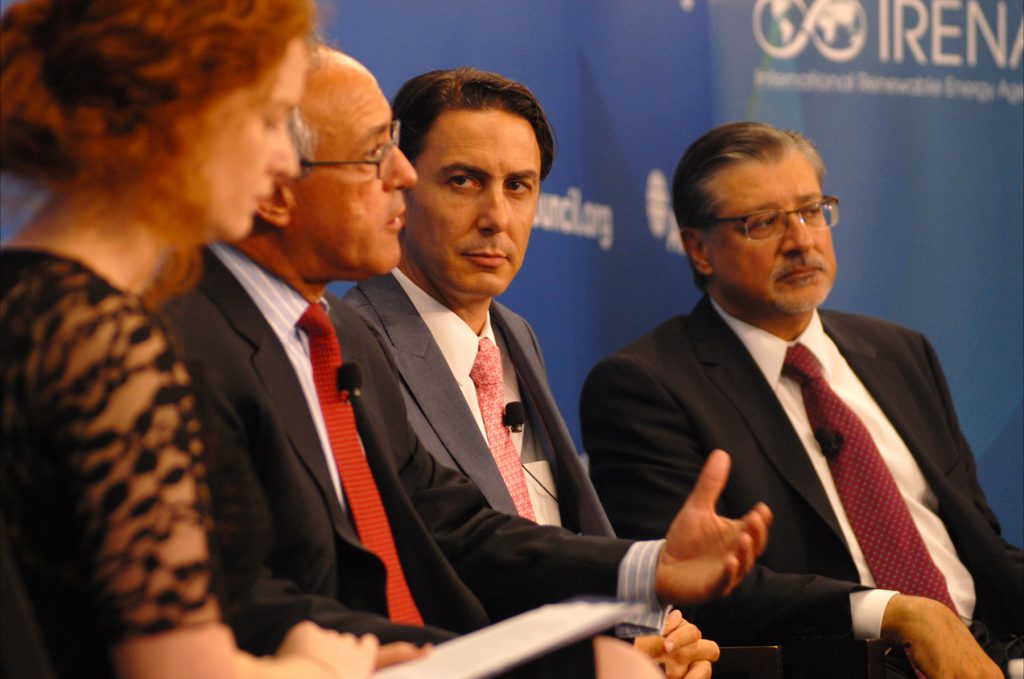 The United States has the technology and financial muscle to boost the renewable share of its energy mix from the current 7.5 percent to 27 percent by 2030—thereby saving the US economy up to $140 billion per year in energy costs while slashing harmful carbon emissions by 30 percent from 2005 levels.

“Renewables have become mainstream,” said Amin, noting that new investments in solar, wind, biomass, and geothermal energy have overtaken those of fossil and nuclear energy combined. “We are seeing developing countries increase their share from 20 percent of the global total to around half of global investment, with renewables now accounting for the majority of capacity addition to the power sector worldwide,” he said.

“A 27 percent share of renewables would reduce US carbon emissions by 1.6 billion tons a year,” Amin explained. “At a time when much of our attention is focused on climate change, and you’re seeing more and more articles warning that the two-degree target [of temperature rise] may not be reached, these trends allow us to look at a positive future.”

He urged the United States to “not fritter away its technological advances” but instead lead the world in the transformation from fossil fuels and nuclear to renewable energy.

In the four years since its birth, IRENA has expanded its roster to include 170 member countries, said Amin, adding that “its growth is a direct reflection of the transformation of the energy sector, indicating the next sector of economic growth worldwide.”

“Unlike oil and gas, the technological advances we’re seeing in renewables are making them cheaper and better,” said Amos Hochstein, Special Envoy and Coordinator for International Energy Affairs at the US State Department. (Atlantic Council / Larry Luxner)

“We all talk a lot about the remarkable transformation in the oil and gas industry, and the price reduction from the $115-a-barrel high just about a year ago. It’s an extraordinary subject that makes headlines, but nowhere near as much ink is dedicated to the fact that the price reduction for renewables has been just as spectacular,” said Hochstein.

Even more significant, he noted, is that while much of today’s discussions center around whether oil will rebound to $60, $70, or even $80 a barrel, the talk on renewables is how quickly prices keep dropping.

“Unlike oil and gas, the technological advances we’re seeing in renewables are making them cheaper and better,” said Hochstein, who oversees US foreign policy engagement in the intersection of energy and national security.

Indeed, said Amin, India recently committed to generating 100 gigawatts of solar and 60 gigawatts of wind energy by 2022. Onshore wind farms in Egypt now produce electricity at a cost of only four US cents per kilowatt-hour, while in Dubai, unsubsidized solar energy costs six cents per kilowatt hour—one-fourth the cost of gas-generated electricity.

From 2008 to 2014, the weighted average cost of residential solar energy in the United States fell by 42 percent, while globally, the price of solar panels has tumbled by 75 percent since 2009—even as performance improves.

Hochstein said it’s easy for critics to explain the surge in renewables by pointing out that oil peaked at $115 a barrel—sparking interest in alternatives—but that as oil prices drop, so would investment in renewables.

“That did not happen,” he said. “Renewable energy investment grew this year over last year, when people did not think oil would go back to the days of $100 a barrel. Two of the world’s largest oil producers, Saudi Arabia and the United Arab Emirates, should be saying ‘let’s try to kill the technology and hope for better days,’ but instead, the UAE is fighting to host IRENA and Saudi Arabia is announcing new solar initiatives every week. They understand that for their own economic survival, they can’t rely on oil anymore.”

However, Todd pointed out that power utilities in much of the developing world are not reliable, and that potential investors might be scared away, “so there’s a very important role for policymakers to play in providing long-term guarantees that give assurance to capital that we support their investments.”

Hochstein agreed, telling participants “we must be careful that a certain part of the world doesn’t get all the investment money while the developing world goes without. We have to come up with a public policy that will make sure we also deploy renewables in places where banks don’t want to go as a first resort. We need an enabling environment.”