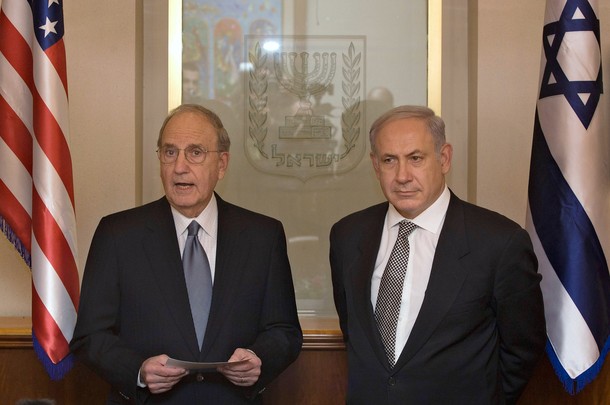 It comes as no revelation to report that the efforts of the Obama administration to move the on-again, but mostly off-again peace process between Israel and the Palestinians is currently going nowhere. Cynicism and pessimism has set in on both sides of the equation suggesting that neither the Israelis or Palestinians are willing or able (or both) to make the kinds of concessions necessary to vitalize the talks (people like to talk about revitalizing them, but when were did they ever have real life?). Over sixty years after the partition of Palestine into Jewish and Arab sectors (as they were originally designated, not as Israel and Palestine), both sides are deeply suspicious of the motives and sincerity of the other regarding meaningful and acceptable bargains. These perceptions are probably largely correct on both sides.

The Obama administration, with George Mitchell as the not very sharp tip of the spear, has been trying to move the situation toward the two-state solution in some form, with a cessation of additional building and the willingness to abandon some or all Israeli “settlements” on the West Bank as its centerpiece.

The problem is, and has been, that although majorities (smaller in Israel, except among Israeli Arabs) on both sides support a “two state for two peoples” solution, neither can agree on exactly what the parameters of such a deal would entail. The devil is decidedly in the details. Moreover, the political winds regarding solutions are shifting as well. In an article in the current edition (December 2010) of Current History, for instance, Tamar Hermann details these changes, which include a vast weakening of Israeli political parties and a movement to the political right generally among Israelis. The right, of course, has formed the basic opposition to movement toward a permanent agreement with the Palestinians, at least on terms the Palestinians are likely to accept. Within that has become an almost institutionalized atmosphere of distrust and cynicism on both sides, the result has been an enormous inertial force that the Obama administration has proven unable to start moving.

Inertia, of course, serves the purposes of those on the political right in Israel, at least in the short run. The electoral base of Igvador Lieberman’s Beit Yisreal is based on settler (especially immigrant settler) support, which opposes a Palestinian state and backs expanded settlements. Prime Minister Benjamin Netanyahu shares opposition to negotiating away the West Bank because, as Hermann puts it, “Israel’s control of the occupied territories is in Netanyahu’s view justified by two equally important arguments: the Jews’ historical claim to the promised land and the constant existential threats that faces them.” The validity of these arguments is almost beside the point; the point is that these positions are now the Israeli positions and ones from which the leadership is not likely to budge. The Americans (and certainly the Palestinians) may not like this,but there is little they can do short of threatening a breach of relations with Israel, a position that is politically untenable in the United States.

It is within this setting that a confident Netanyahu has suggested a “reset” of the terms of negotiation between the parties. This position starts from the premise that fundamental territorial adjustments (e.g. abandonment of all or most West Bank settlements) is no longer a viable basis for an agreement, and that some other basis (a “reset”) must form that basis. Neither the Obama administration or the Palestinians are exactly ecstatic about this position, but there it is.

Among the more innovative proponents of a reset has been Lieberman, the controversial Israeli foreign minister. He has suggested, for instance, the cessation of a small amount of occupied territory to the Palestinians that would leave the larger and more prominent settlements intact. In particular, he suggests ceding an area near the old pre-1967 border within Palestine known as the Triangle and the Arab neighborhoods of East Jerusalem into the Palestinian state. According to Sergio DellaPergola (also writing in the December 2010 Current History), the Triangle contains an Arab population of 300,000 and 275,000 Arabs live in East Jerusalem, thus adding nearly 600,000 Arabs to the Palestinian state.

Lieberman’s proposal has not gained great traction. Other Israelis consider the ceding of any part of Jerusalem unacceptable, and Palestinians counter that it still leaves much too much of the West Bank under Israeli occupation and control. It is probably as great a concession as the current Israeli government might be willing to make, and it looks like it is not enough.

There seem to be two realities at work here, neither of which bode well for progress toward peace. One is that the current framework for negotiations is not working, mostly because neither of the main proponents truly wants the framework to succeed (or is unwilling to take the steps to make it work, which in effect is the same thing). The other is that some alternative base–a “reset”–appears to be needed to get the talks moving, and nobody has found an acceptable reset button. The simplest and, applying the principle of Occam’s Razor, most likely reason is because neither side wants a permanent settlement worse than the present situation. Until that changes, pushing reset buttons will continue to be an exercise in futility.

Donald M. Snow, Professor Emeritus at the University of Alabama, is the author of over 40 books on foreign policy, international relations, and national security topics. This essay first appeared at his blog What After Iraq? Photo credit: Getty Images.