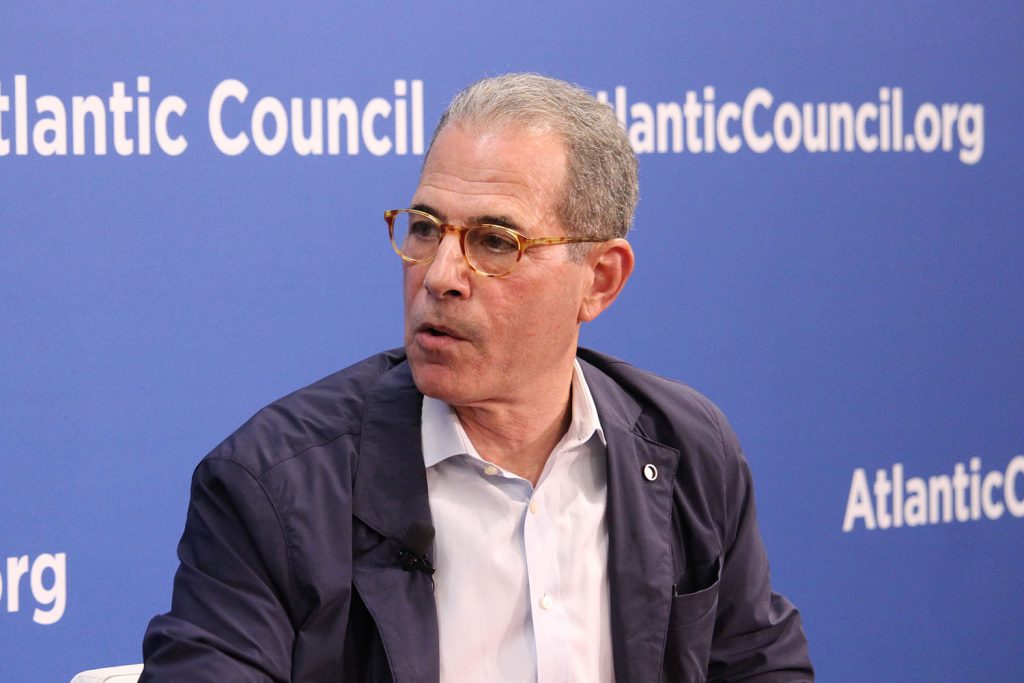 “When it came to information, I’d always been an idealist,” Richard Stengel writes early on in his recent book, Information Wars: How We Lost the Global Battle Against Disinformation. “I left office an information realist.”

Stengel, who served as the Undersecretary of State for Public Diplomacy during the Obama administration—a role he prefers to think of as “chief marketing officer of brand America”—had a unique vantage point from which to witness and lead some of the United States’ critical efforts in the global battle against disinformation. At a talk hosted by the Atlantic Council’s Digital Forensic Research Lab (DFRLab) on October 16, 2019, and moderated by CNN Correspondent Michelle Kosinski, he discussed the threat disinformation—both foreign and domestic—poses to democracy, the factors that make us vulnerable, and what we can do about it.

At State, Stengel was tasked with responding to two major disinformation efforts targeting the United States and its allies: the rise of online Islamic State (ISIS) propaganda and the Kremlin’s interference, via the Internet Research Agency (IRA), in the 2016 US presidential election. Stengel notes that, in many ways, the fight against countering ISIS propaganda was a success story because, with regard to terrorist propaganda featuring graphic imagery, “the content is the crime.”

The content produced by the Kremlin-linked IRA troll factory, however, proved harder to fight; rather than relying on pure shock value, it instilled confusion and sowed discord by appealing to Americans’ preexisting beliefs and biases. The DFRLab observed this firsthand in its coverage of the troll farm. Russian troll accounts masqueraded as hyperpartisan supporters of US President Donald J. Trump, targeted the midterm elections with divisive content, and tested their messaging aimed at a foreign audience via trial and error. After the Mueller indictment, Kremlin state-funded media outlets further used the 4Ds of disinformation framework to dismiss, deny, distort, and distract from claims that Russia interfered in the 2016 election.

As Stengel observed, the tactics the Kremlin used to interfere in the 2016 US election were nothing novel; the Russian government deployed these two years earlier, in the midst of its annexation of Crimea. The Atlantic Council’s groundbreaking 2015 report, “Hiding in plain sight,” used open-source tools and methodology to provide indisputable and overwhelming evidence of Russia’s involvement in eastern Ukraine, even as Russian President Vladimir Putin issued vehement denials. The Atlantic Council Working Group that produced that report eventually established the DFRLab.

Stengel also highlighted the need for continued awareness and cooperation among the United States and its allies in the global fight against disinformation. Before it meddled in the US election, the Kremlin had for decades marshalled inauthentic tactics and state-funded propaganda outlets in its attempts to influence an audience in the Baltic states; the DFRLab has reported on those efforts extensively and will continue to do so.

Disinformation—both foreign and domestic—is a catalytic harm that acts to magnify existing societal vulnerabilities. Combatting it requires a coordinated effort among government, tech, and civil society, as well as a deep understanding of the individual and systemic factors that make us vulnerable. Forging digital resilience is an urgent priority—because, as Stengel said, disinformation is “an attack on our very democracy. And Americans need to be aware of it.”

See More from the DFRLab

Image: Richard Stengel speaks at the Atlantic Council on October 16, 2019.