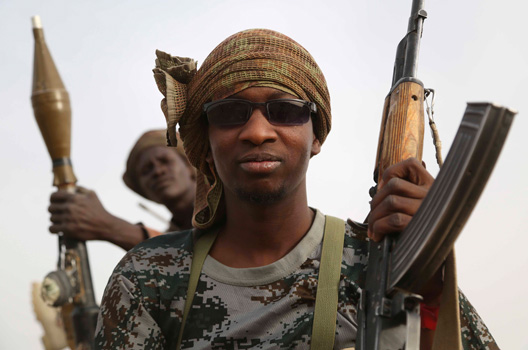 A US law that bans the sale of weapons to foreign forces accused of human rights violations is “hindering” cooperation between the United States and Nigeria, even as Abuja wages war against Boko Haram militants, a top Nigerian intelligence official said March 11.

“You want to train a battalion of men to go and counter terrorism…  but you don’t want us to buy equipment from you,” Rear Admiral Gabriel E. Okoi, Nigeria’s Chief of Defense Intelligence, said at a meeting hosted by the Atlantic Council’s Africa Center.

“The US is doing its best, but the Leahy law is hindering our cooperation,” he added.

In a thinly veiled swipe at the United States, Okoi said: “Our friends disappointed us. We could not get the arms we needed, nor could we get the ammunition.”

In a recent letter to The Hill, Sen. Patrick Leahy (D-Vt.) defended the law that bears his name.

“If the Nigerian government wants the United States to support units that have committed heinous crimes with impunity, it needs to get serious about not tolerating it. It’s that simple,” he wrote.

Following a recent meeting at the State Department, US and Nigerian officials “agreed to disagree” on the issue of military assistance, said Ayodele Oke, Director-General of Nigeria’s National Intelligence Agency, who also spoke at the Atlantic Council.

A joint military offensive by Nigeria, Chad, Cameroon, and Niger against Boko Haram has driven the militants from many of their strongholds in northeastern Nigeria.

Boko Haram is best known in the West for kidnapping 276 schoolgirls in Chibok, a town in Nigeria’s northern Borno state, in April 2014. The abductions sparked a global outcry and a social media campaign, yet almost a year later there is still no sign of the girls.

Boko Haram’s leader, Abubakar Shekau, in a recent audio recording, pledged allegiance to Abu Bakr al-Baghdadi, the leader of the Islamic State in Iraq and al-Sham (ISIS), whom he hailed as a “caliph.”

This pledge was “not entirely unexpected,” in part due to recent pressure on the group from the militaries of Nigeria and its neighbors, said J. Peter Pham, Director of the Atlantic Council’s Africa Center.

“In fact, the ‘shout-outs’ exchanged regularly between Boko Haram and ISIS were not just rhetorical flourishes, but indicative of a veritable courtship as the former appropriated more and more of the latter’s symbolism, tactics, and ideology,” Pham wrote for CNN.

Nigerian officials see the pledge as giving a propaganda boost for Boko Haram, and as evidence that the group is planning even more brutal attacks.

In May 2013, after Boko Haram seized large swaths of territory, Nigerian President Goodluck Jonathan responded by imposing a state of emergency in the northeastern states of Borno, Yobe, and Adamawa. Nigeria’s ongoing military offensive has liberated all areas of Adamawa and Yobe from Boko Haram’s control, and six of the ten local governments that were under militant control in Borno have been won back, said Oke.

He predicted that the entire region would be under government control in time for elections scheduled for later this month.

However, Okoi, the Chief of Defense Intelligence, said that even once these areas are under government control, terrorist “sleeper cells” will remain a threat.

Nigeria’s Independent National Electoral Commission (INEC) postponed an election originally set for February 14 amid a campaign of suicide bombings by Boko Haram and because millions of voters had not received their permanent voter cards.

Jonathan faces a strong challenge from Muhammadu Buhari, a retired major general who ruled Nigeria from 1983 to 1985.

The inauguration of a new government on May 29 “remains sacrosanct,” Oke said.

Image: A Chadian soldier fixes his headscarf while driving at the front line during battle against Boko Haram militants in Gambaru, Nigeria, on February 26. Niger, Cameroon, and Chad have launched a regional military campaign to help Nigeria defeat the Boko Haram insurgency, which aims to carve an Islamic emirate out of northeastern Nigeria. (REUTERS/Emmanuel Braun)