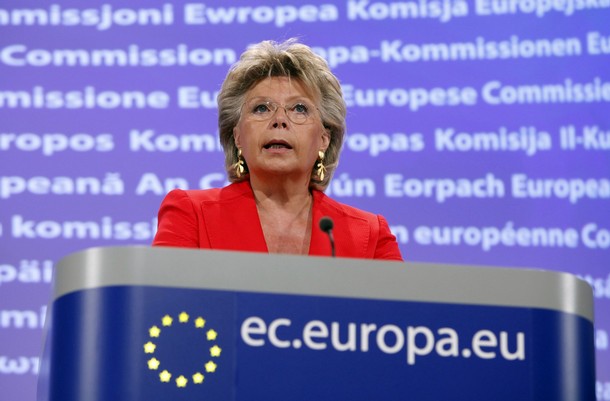 The EU is vowing to take action against France for its expulsion of hundreds of Roma, setting up a showdown that will test the sovereignty of one of Europe’s most powerful countries against the newly empowered European Commission.

The European Union had stayed quiet until this week, when it made the rare move of publicly rebuking France. On Thursday, Sept. 9, in a resolution that was passed by 337 votes to 245, the Members of the European Parliament (MEPs) told Paris to "immediately suspend all expulsions of Roma," saying they "amounted to discrimination."

Although their demands are not legally binding, the MEPs said that "mass expulsions are prohibited" under E.U. law, "since they amount to discrimination on the basis of race and ethnicity." Belgian MEP and former Prime Minister Guy Verhofstadt said it was unacceptable for politicians to be "tempted by populist, racist and xenophobic policies," while German MEP Martin Schulz, head of the Parliament’s powerful socialist group, lamented, "The country that gave us liberté, égalité and fraternité has taken a different, regrettable path today."

The E.U.’s comments followed European Commission President José Manuel Barroso’s veiled criticism of France on Tuesday in his first-ever State of the Union address to MEPs. Without mentioning France by name, Barroso said European states should not "reawaken the ghosts of Europe’s past." Earlier in the week, in a leaked interim report, the Commission had questioned whether France was meeting the E.U.’s legal requirements with its deportations — notably, whether case-by-case assessments of the deportees were being made — and underlined that measures singling out a specific ethnic group are illegal.

French officials dismissed these statements, with Immigration Minister Eric Besson declaring the Parliament was "exceeding its prerogatives."  Cendrowicz reasonably thought it would end there, writing, "there is little that European institutions can do against a determined government: the E.U. has no authority to interfere with the internal affairs of national governments, as long as they don’t impinge on community rights."

But European Commission Vice President and Commissioner for Justice, Fundamental Rights and Citizenship Viviane Reding (who spoke at the Atlantic Council in July) apparently took umbrage at Paris’ dismissal and ratcheted up the pressure. She declared today that the expulsion was "a disgrace," adding, "I personally have been appalled by a situation which gave the impression that people are being removed from a member-state of the European Union just because they belong to a certain ethnic minority. This is a situation I had thought Europe would not have to witness again after the Second World War.”

UPI ("EU may sue Paris over Roma case") quotes Reding saying, "I am personally convinced that the commission will have no choice but initiate infringement procedures against France" and reports she would file at least two cases against France on a "fast-track" basis, with a decision coming within two weeks.

The Economist‘s Charlemagne rightly terms this a "remarkable turn of events," noting "The commission is typically accused of being timid, particularly when it comes to taking on big member-states like France. Infringements of EU regulations is one thing; a head-on confrontation over the internal politics of a founding member of the EU is quite another."

Reding’s declaration that the EU is "held together not by force, but by respect of the rule of law agreed upon by all member-states, including France" would seem self evident.   It’s a voluntary association and prospective new members jump through extraordinary hoops for the privilege of joining.   (See former Latvian president Vaira Vike-Freiberga’s remarks on her country’s accession, for example.)

But Cendrowicz has a point:  We’ve never had a test like this one, as Brussels has been quite reluctant to challenge one of Europe’s major players up to this point.   If the Commission rules against France and orders the rescinding of this policy, then what?   Does Sarkozy feel the domestic pressure on this one strongly enough to fight the EU over it?    And if he thumbs his nose, then what?   What consequences is the Commission able and willing to impose?

My guess is that both sides find a face-saving way to back way from confrontation over what is at the end of the day a relatively minor issue.   But if they don’t, we’ll soon be either much closer to a powerful Europe or take several steps back towards it being a mere economic cooperative.