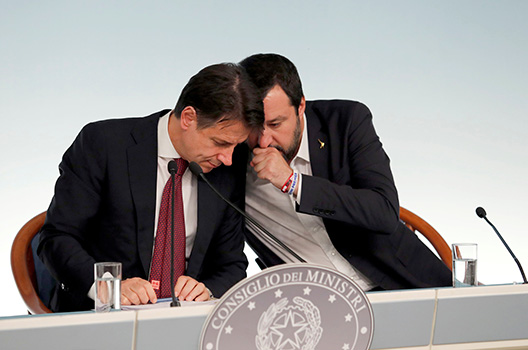 In light of the European Commission’s rejection of its budget proposal, the Italian government essentially has three options: “cave quickly and fall into line with the EU’s demands, cave slowly, or take Italy off the cliff and leave the euro,” according to Megan Greene, managing director and chief economist for Manulife Asset Management.

The Italian government’s initial reaction—to brush off Brussels’ concerns—has shown that “the cave quickly option is off the table now,” according to Greene.

The Italian proposal violates a European Commission stipulation that budget deficits must decline year-on-year. Instead, under this proposal, Rome’s deficit would continue to grow.

The European Commission issued a “negative opinion” on the Italian proposal on October 23. It asked the Italian government to revise its plans to conform with EU debt rules.

Speaking on an Atlantic Council press call with Greene on October 29, Bart Oosterveld, director of the Council’s Global Business and Economics Program, explained that the Italian government projected its budget would increase the budget deficit from 1.8 percent in 2018 to 2.4 percent in 2019. This increase would raise the deficit to “more than triple the level desired by the European Union,” Oosterveld said.

Fresh off of electoral victory in March 2018, the new Italian government, made up of the populist and anti-European Lega Nord and Five Star Movement parties, set out to fulfill campaign promises by cutting taxes, increasing social spending, and rolling back pension reforms. Rome submitted the new budget with full awareness that it would be in violation of EU rules, as Greene explained Italian officials knew “this isn’t what the EU wants, but we are doing it anyway.”

Italy is not the first country to run afoul of Brussels’ debt limitations, Greene and Oosterveld pointed out. Others, such as Portugal and Spain, have shown how to get around the rules. “All of them have pandered to the EU and said ‘but we are trying to go in the right direction. We are trying but we need a little bit of wiggle room,’” Greene explained. The problem is that Rome “is not pretending” to do anything but flaunt the EU’s rules.

Greene does not expect Rome to make concessions to Brussels quickly, in part because “the budget has played out really well for them” domestically and “this government has shown that they are quite willing to clash with Brussels and with Berlin.” Many in the government scoff at the need to concede more to Brussels as “in their view they have already compromised because they are only starting to phase those things in rather than doing them—as they wanted to—all together at once at the beginning,” Greene said.

Despite this reluctance to back off, Rome could still avoid a confrontation with Brussels if it simply “backs off” of its inflammatory rhetoric against Brussels, Greene argued. Oosterveld agreed, saying that the feud could end like a “classical EU muddle-through scenario: [it will] take a while for the government to back down, but they will back down just enough to satisfy the European Union. [In return], the EU won’t force a hard solution or adjustment.”

Greene maintained that “a lot of time” remains for an agreement to be reached before Brussels could take disciplinary action against Italy.

Rome has plenty of time to back down, Greene argued, because this process “is going to be a slow burn.” Brussels cannot technically take any punitive action against Italy until it finalizes its official statistics for 2018 sometime in March or April of next year, Greene explained. It will then take time to agree upon and enforce potential penalties against Italy.

These response measures could include sanctions “as small as 0.2 percent of gross domestic product [GDP] or they can go up to 0.5 percent of GDP,” on top of cuts to EU funding. Many in Brussels do not feel responsible for saving Rome’s Eurosceptic government, but Greene warned that uncertainty remains over what the EU’s response would be, as “we are in some unchartered territory.”

Greene and Oosterveld maintained that it would likely be market, not political, forces that force Rome to back down. Right now, Greene argued, “nobody’s really panicking yet” because of the significant amount of time remaining and Italy’s considerable “cash buffer.” Italy is “not facing imminent bankruptcy and the markets understand that,” Greene said, explaining that Italy’s cash reserves and long length of average maturity for its debt means that “it would take a long time for Italy to actually run out of money.”

Even so, Oosterveld said, Italy’s large public debt stock, totaling more than 130 percent of GDP, creates significant risk as, during times of slow economic growth, “public finances and government budgets become extremely sensitive to small changes in borrowing costs.” Weak economic growth continues to be the heart of the issue for Italy and, despite the claims of the government, the increased spending and tax cuts of the new budget will likely be offset by increasing borrowing costs, making it increasingly difficult for Italy to pay off its massive debt stock, according to Oosterveld.

“The real Achilles’ heel for Italy,” Greene added, “is still its banks.” While some banks have taken steps to cast off non-performing loans, many “have been loading up on Italian sovereign debt,” increasing their exposure and raising the specter of a damaging bank run, Greene said. She noted that “Italy’s debt burden is roughly where Greece’s was when it was forced into an international bailout” in 2010.

To make matters worse, Greene noted that efforts by the EU to cajole the Italian government into submitting to Brussels’ desired fiscal model—or worse, refusing to help Rome in a crisis in order to push the populists out of political control—could deepen Euroscepticism within the country.

“It is not as unfathomable for Italy” to leave the Euro as it once may have seemed, Greene argued.