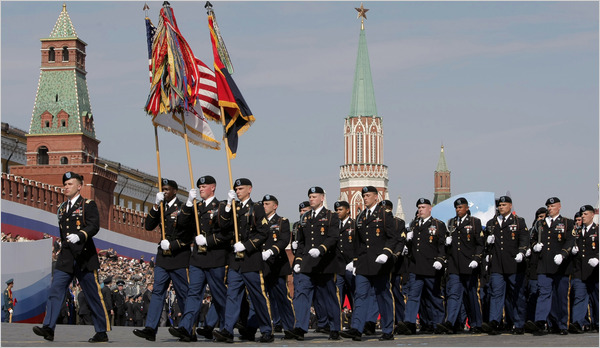 Apart from a now customary display of Russia’s military might, the recent commemoration of the victory over Nazi Germany in Moscow witnessed a strange spectacle of NATO troops marching on Red Square.  The presence of its erstwhile enemy has stirred controversy in Russia. It is no secret that both the Kremlin and the Russian public at large continue to harbor a rather negative view of the Alliance.  Let us not forget that the Russian leadership as well as Russian society still remains suspicious of NATO.

The fact that Moscow invited NATO troops to parade alongside Russian soldiers raises a host of intriguing questions about the future direction of the NATO-Russia relationship. Brussels and Moscow have recently embarked on a rather tedious process of repairing their ties in the wake of the war in Georgia.  Are Brussels and Moscow in for a more durable rapprochement?   At the moment, NATO and Russian officials continue to sound quite upbeat about the prospects for deepening their cooperation. Clearly, the US, EU and Russia have considerable stakes and common interests to consider.   But let us speculate even more; can this ongoing thaw eventually result in NATO membership for Russia?

In December 2009, the first session of the NATO-Russia Council was held after its suspension in response to the war in Georgia. That meeting opened a new and less tense chapter in NATO-Russia relations – one of the most visible manifestations of the current thaw.

In the meantime, the NATO countries have become increasingly engaged in political, military and relief activities in Afghanistan.  Despite all its grudges against the Alliance, Russia can ill afford the failure of NATO, since it would then have to face the spread of violence and extremism on its own in Central Asia. Under the umbrella of the NATO-Russia Council,  a myriad of programs and activities have been progressing. NATO and Russia agreed on a road map of military activities for this year. Dmitri Trenin, a prominent Russian foreign policy expert, suggested that NATO and Russia should explore the development of joint missile defenses, for example.  His idea was recently echoed by Russia’s Foreign Minister Sergey Lavrov at a press conference last month, where he spoke in favor of just such a joint endeavor with the Alliance.  There is ample room for both sides to share expertise and technology in addressing common challenges and a panoply of current global threats.

Does this dawn of a more cooperative relationship herald a more far-reaching reconciliation between these former rivals? If so, is Russia’s admission into NATO feasible in the long-run?  However hypothetical it might seem, the subject has been broached periodically by foreign policy makers and experts on both sides. As early as December 1991, Russian President Boris Yeltsin wrote to NATO leaders saying that his country would join the Alliance some time in the future. Yeltsin’s successor Vladimir Putin, hinted during his first presidential term that Russia could become a full fledged member of the Atlantic Alliance.

In early February this year the Institute of Contemporary Development — an influential liberal think-tank with close links to current Russian President Dmitry Medvedev who sits on the Institute’s board of trustees — published a report on the future of Russia. It foresees Russia’s accession into NATO over time. Although the Institute represents a fairly isolated liberal point of view, the fact remains that by resuscitating the notion of Russia’s NATO membership the report shows that this daring proposition has not been banished from Russia’s foreign policy debate.

Nonetheless, for Russia to join NATO a number of practical hurdles remain in place.  NATO membership entails the acceptance of certain limits on a member country’s sovereignty and freedom of action. This would make Russia’s full integration into the Alliance problematic for the near to mid term.   One might argue that Russian membership in NATO would signal an end to the Alliance as we know it. Since all of NATO’s decisions have to be unanimous, member countries have the right to exercise a de facto veto. For its part, Moscow could in theory paralyze the Alliance if it wished.  Yet, the naysayers tend to ignore the fact that despite its anti-NATO rhetoric, Moscow might seek to gain deeper influence in NATO as a means to stay more fully engaged in the European security dialogue – a theme that was evident in President Medvedev’s Security Pact proposal.

Will the Alliance accept Russia as a member — as was suggested in an open letter published in Der Spiegel Magazine in March of this year by a group of German politicians, including former defense minister Volker Rühe? The issue of NATO membership for Russia will remain confined to the realm of speculation, at least in the foreseeable future.

Nevertheless, subtle hints by the Kremlin, such as the publication of the February report and NATO troops parading on the Red Square, should be interpreted less as a formal application and more as a genuine expression of interest in deepening ties with the Alliance.  In fact, as it has been the case in the past, similar feelers sent by Russian leaders have singled their willingness to pursue a considerably more cooperative relationship with the Alliance.  If those signals are acted upon, there is a chance for qualitative improvements in the way Moscow and Brussels interact with one another – which could potentially strengthen the European security architecture.

This article builds on an opinion piece published on the EUobserver website. Donald K. Bandler, a member of the Atlantic Council Board of Directors, served as Special Assistant to President Bill Clinton, Senior Director for Europe in the National Security Council, Counselor for the 1999 NATO Summit, and U.S. Ambassador to the Republic of Cyprus. Jakub Kulhanek is currently with the Center for Eurasian, Russian, and Eastern European Studies at Georgetown University. Michal Thim, a research fellow at the Prague-based Association for International Affairs, also contributed to this article. Photo credit: Misha Japaridze/Associated Press.