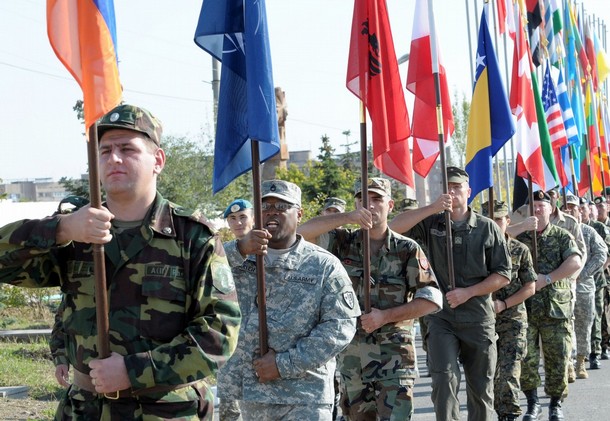 Russian is urging NATO to cancel military exercises with Georgia planned for next month. A current round of demonstrations against Mikheil Saakashvili has only further increased tensions in the region, he noted.

Russia’s foreign minister criticized on Thursday NATO’s plans to conduct exercises in Georgia, saying they could give the Georgian regime a sense of impunity, and raise tensions in the Caucasus region.

The Cooperative Longbow 09/Cooperative Lancer 09 exercises led by the Western military alliance will be held from May 6 through June 1, and will not feature weapons or military vehicles.

Sergei Lavrov said: “I hope that NATO countries, in planning future interaction with Georgia within the Partnership for Peace program, will avoid steps that could nudge the Georgian regime into a feeling of permissiveness and impunity.” “With regard to Georgia’s regime, a demonstration of NATO’s participation [in the exercises] will not send the right signal by those who honestly want to achieve stability in the Caucasus,” he said.

The Russian permanent representation at NATO has urged the leadership of the alliance not to hold exercises in Georgia in May.

“We forwarded an official address to NATO Secretary General Jaap de Hoop Scheffer to propose that the NATO military exercises in Georgia planned for the near future be postponed or canceled,” Russian Permanent Representative to NATO Dmitry Rogozin told Interfax on Thursday.  There are three reasons for this request, and each of them is significant enough to persuade NATO not to hold such exercises, Rogozin said.

The exercises, which have been planned since the spring of 2008, will involve about 1,300 people from 19 Nato and partner countries and will be held at a training centre 20 kilometres (12 miles) east of Tbilisi. The military alliance said in a statement that the exercises had the “aim of improving interoperability between Nato and partner countries.”

Nato spokesman Robert Pszczel said that so far Nato Secretary General Jaap de Hoop Scheffer had received no request for a postponement from Russia. He added that they would be essentially co-ordination exercises, involving “no heavy military equipment.”  “There is no controversy, no surprise and no connection with the situation in Georgia or in the region,” he stressed.

Whether wise or not, NATO proclaimed in Bucharest a year ago that Georgia and Ukraine would one day be members of the Alliance, a position that leaders of its core states have reiterated repeatedly since the Russian invasion of last August.  They have also vowed time and again that Russia would have no veto power over who would be part of NATO.

Backing down from a mere command post exercise after all that would undermine the Alliance’s credibility beyond repair.