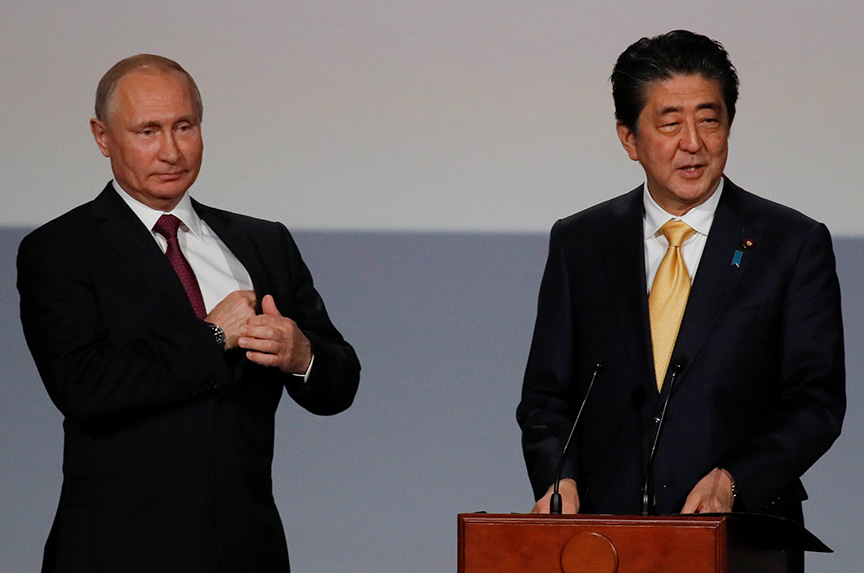 Russia’s annexation of Crimea in 2014 tested Japanese Prime Minister Shinzo Abe’s ability to strike a balance between the G7 and Moscow. On one hand, Japan, as a G7 member, is expected to join the international community in its condemnation of Russia’s meddling in Ukraine. On the other, Japan values its relationship with Russia, which it sees as a strategic partner.

Japan’s balancing act has, however, emboldened Russia. While the fact that Russia capitalizes on rifts within the European Union (EU) and the transatlantic relationship is widely acknowledged, less attention is paid to its wedging strategy in Asia.

Japan’s policy toward Russia is driven by its eagerness to resolve a longstanding dispute over what Japan calls the Northern Territories and Russia calls the Southern Kurils. As a result of this dispute, Russia and Japan have not signed a peace treaty to end World War II.

Abe’s strong desire for a resolution of this dispute has created convenient political leverage for Moscow. Tokyo has chosen a conciliatory approach toward Russia and it was only after pressure from the United States that Japan imposed symbolic and limited sanctions on Russia in response to Russia’s actions in Ukraine.

Following Russia’s purported attempt to murder a former Russian spy, Sergei Skripal, and his daughter, Yulia, in the United Kingdom in March, Tokyo opted not to support the British government in condemning the incident claiming that there was a lack of evidence of Russian involvement.

Japan also did not provide direct support for airstrikes on the Russia-backed regime of Bashar Assad in Syria in April, again claiming a lack of evidence of the regime’s involvement in a chemical weapons attack.

Unlike the United States, the European Union (EU), and Canada, which followed the Netherlands’s and Australia’s lead to hold Russia legally responsible for the shooting down of Malaysian Airlines MH17 over Ukraine in 2014, Japan has chosen to remain silent.

First, it allows Russia to drive a wedge between the United States and Japan. While former US President Barack Obama’s administration voiced dissatisfaction with Japan’s rapprochement with Russia following the annexation of Crimea, US President Donald J. Trump’s administration has distanced itself from the region, giving Japan room to conduct its Russia-friendly policy. Tokyo has given symbolic support to sanctions while forging economic ties with Russia.

While the United States has continued a policy of diplomatic isolation of Russia, Japan has sought to serve as a bridge between the West and Russia. Moscow has exploited this divergence to encourage Tokyo’s independent foreign policy. For example, when Japan abstained from expelling Russian diplomats over the Skripal case, Mikhail Galuzin, Russia’s ambassador to Japan, expressed his appreciation of “the Japanese government’s balanced attitude.”

Second, Moscow often employs its “carrot-and-stick” policy in negotiations with Japan over the Northern Territories—first indicating that it is interested in resolving the territorial dispute and then using different pretexts to criticize Japan. Moscow, which is interested in delaying progress in these negotiations as much as possible in order to get investments to develop its Far East, has used Japan’s support for Western sanctions and the Japan-US alliance as excuses. When Japan ultimately implemented sectoral sanctions on Russia over Ukraine, Moscow labelled it an “unfriendly and short-sighted step,” implying that it would harm the Russia-Japan relationship. Ahead of the St. Petersburg International Economic Forum in May, Moscow called the Japan-US alliance a hindrance to the development of Japan-Russia relations.

Third, Russia has exploited Japan’s divergence from other members of the G7 in its information war. Similar to its tactics that seek to sow division in Europe, Russia’s state-owned media has exploited Japan’s dovish position and questions the effectiveness of Western sanctions. For example, Japan’s former prime minister, Yukio Hatoyama, was cited by numerous Russian media when he acknowledged the legitimacy of the Crimea referendum and supported the lifting of sanctions on Russia.

Japan’s weak sanctions have created loopholes, which Russian companies have been eager to exploit. Japanese companies, too, are carefully navigating the gaps in the sanctions regimes, especially in the energy sector. The government-backed Japan Bank for International Cooperation (JBIC), for example, invested $200 million in Yamal LNG, owned by Novatek, which is the target of US sanctions. In 2015, JBIC considered direct ruble-yen currency swaps with Gazprombank, VTB, and VEB—all of which are under US and EU sanctions—to avoid reliance on US dollar transactions. In 2016, JBIC provided a $39-million loan to US-sanctioned Sberbank for a construction project in the Far East. Another JBIC project included a $170-million investment in Transneft, Russia’s oil pipeline monopoly, which is sanctioned by the United States and the EU.

Japan’s approach to Russia has damaged its image in the West. Desperate for a quick settlement to a territorial issue, Tokyo has opted for rapprochement with Russia despite increasing international pressure. As a result, Tokyo’s options in the territorial negotiations have been limited and divisions have been created among allies. For Russia, this disunity is an opportunity to be exploited with the goal of weakening Western sanctions.

Maria Shagina is a JSPS postdoctoral fellow at Ritsumeikan University (Japan) and is a member of the Geneva International Sanctions Network. Follow her on Twitter @maria_shagina.

Image: Russian President Vladimir Putin (left) and Japanese Prime Minister Shinzo Abe attended an opening ceremony of the cross-cultural year of Russia and Japan at the Bolshoi Theatre in Moscow, Russia, on May 26. (Reuters/Maxim Shemetov)