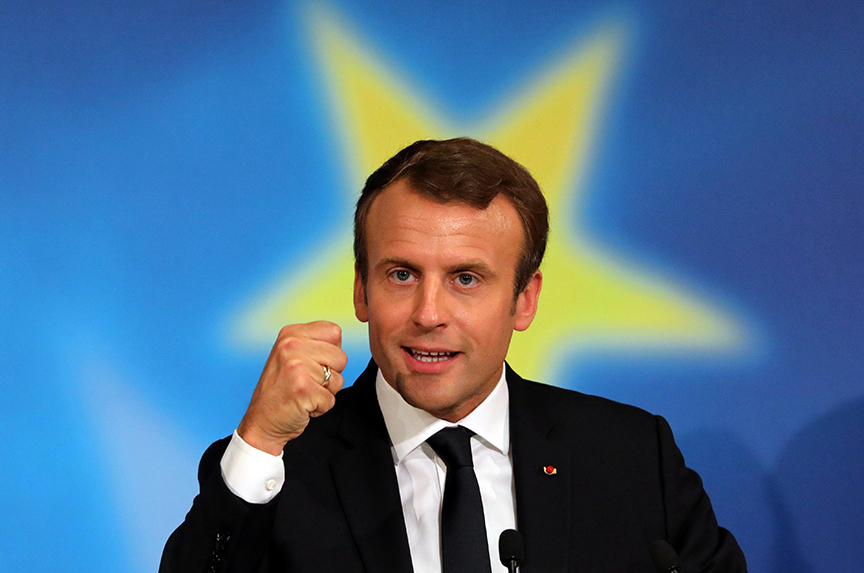 Emmanuel Macron of En Marche! made it to the second round of the French presidential elections on April 23. Macron, pictured here at the Parc des Expositions hall in Paris, will face the National Front’s Marine Le Pen in the May 7 runoff. (Reuters/Benoit Tessier)

As missile strikes are contemplated, France’s ambassador to the United States says political transition in Damascus must be explored

The United States and its European allies should explore with Russia and Iran the possibility of a credible political transition in Syria that can end the seven-year war in that country, France’s ambassador to the United States, Gérard Araud, said at the Atlantic Council on April 12.

Such a process has been attempted by the United Nations (UN) in Geneva, but it has made little headway. Araud said this was because the Assad regime’s delegation has not discussed political transition.

“We consider that at the end of that process Assad should leave,” he said.

Araud’s call for diplomacy comes amid developments that appear to be pointing toward imminent Western military action against Syrian President Bashar al-Assad’s regime over a suspected chemical weapons attack in the Damascus suburb of Douma.

French President Emmanuel Macron said in a TV interview on April 12 that he has “proof” that the Assad regime used chemical weapons, “at least chlorine,” in the April 7 attack.

US President Donald J. Trump discussed Syria in phone calls with Macron, whom he will host for a state visit on April 24, and British Prime Minister Theresa May on April 10. France and the United Kingdom could join the United States in military action against Syria.

May convened a special “war cabinet” on April 12 to discuss how to respond to the chemical weapons attack in Syria. The cabinet agreed that it is “highly likely” that the Assad regime was behind the attack in Douma, said a Downing Street spokesperson. “Cabinet agreed the prime minister should continue to work with allies in the United States and France to coordinate an international response,” the spokesperson added.

Asked whether France would join military action, Macron said: “We will need to take decisions in due course, when we judge it most useful and effective.

“France will not allow any escalation that could harm stability in the region,” he said. However, he added, “regimes that think they can do everything they want, including the worst things that violate international law, cannot be allowed to act.”

Trump, who had warned in a tweet on April 11 that strikes on Syria were “coming,” tweeted on April 12 that he “never said when.” Military action “could be very soon or not so soon at all,” Trump tweeted.

In Russia, Kremlin spokesman Dmitry Peskov warned against “any steps which could lead to an escalation of tensions.”

Araud, who participated in a panel discussion at the Atlantic Council, was asked by moderator Susan Glasser of the New Yorker whether missile strikes would be counterproductive to a diplomatic effort.

“From time to time, a big stick has some effectiveness,” he replied.

Assad’s regime has received diplomatic and military support from Russia and Iran-backed militias.

Syria will likely be at the top of the agenda when Macron meets Russian President Vladimir Putin in St. Petersburg in May.

“The Russians know total victory of Assad is not possible,” said Araud. “They know that at some moment they need to shift to a political process… at the same time we suspect that they are really not going to, because they can’t or they don’t want to, deliver Assad.”

Noting Macron’s statement implicating the Assad regime in the use of chemical weapons in Syria, Araud said the French president’s position toward Russia—including his decision to expel Russian diplomats following the poisoning of a former Russian double agent and his daughter in the United Kingdom in March—showed “firmness, but also openness to have a dialogue with the Russians.”

Speaking at an event on April 11, Frederic C. Hof, nonresident senior fellow in the Atlantic Council’s Rafik Hariri Center for the Middle East, said Russia has held out the possibility of constitutional amendments that could lead to elections in Syria in 2021 or 20222.

The challenge for the Trump administration is to determine whether this is a genuine plan or an attempt by Russia to buy time and consolidate Assad’s position, Hof said in a discussion with the Washington Post’s David Ignatius.

Hof also questioned Russian leverage over Assad noting that the Syrian regime had brushed off past Russian entreaties to, at the very least, go through the motions of finding a diplomatic solution to the war during the UN-sponsored talks in Geneva.

He suggested that Iran may actually have more leverage over Assad than the Kremlin does, and said that the United States could explore this option.

The suspected chemical weapons attack in Douma killed seventy people and injured five hundred others. The World Health Organization said forty-three of the deaths were “related to symptoms consistent with exposure to highly toxic chemicals.”

Trump will skip the Summit of the Americas in Peru and a trip to Colombia this week in order to oversee his administration’s response to the suspected chemical weapons attack in Syria.

“If Assad sees this as he saw the incident one year ago, as a one-time, one-off event, then it will accomplish precisely nothing,” he said.

A year ago, on April 7, Trump ordered missile strikes on Al Shayrat air base in Syria following a chemical weapons attack on Khan Sheikhoun, a town in the western Idlib province. The US intelligence community concluded that chemical weapons were stored and loaded onto aircraft used in the attack at Al Shayrat.

Hof suggested that the Trump administration send a clear message to Russia to end its support for Assad.

“I’m not talking about another kinetic operation, rather a strong message to the Russians: ‘You’ve seen what we’ve done. You need to get your guy out of this business… of chemical warfare and mass homicide,’” he said.