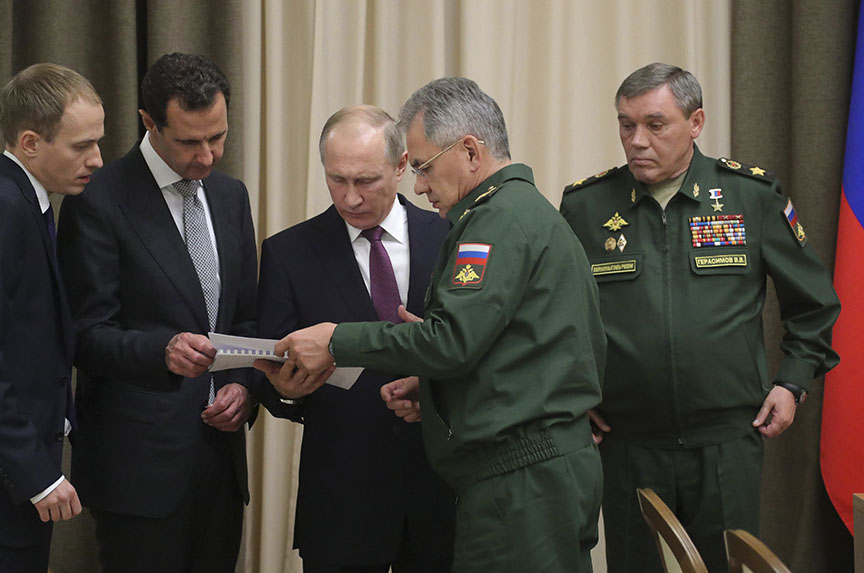 Russia’s state-owned arms company has reaped enormous profits from its support to Bashar al-Assad’s government, which is responsible for war crimes and crimes against humanity in Syria.

The chief executive officer of Rosoboronexport, Alexander Mikheev, said that in 2017 the company signed contracts in fifty-three countries worth approximately $15 billion. These contracts include new clients in the Middle East and Asia-Pacific regions, expanding the geographic scope of the Russian arms market.

Russian President Vladimir Putin’s aide for military and technical cooperation, Vladimir Kozhin, told Kommersant newspaper that Russia has entered into contracts or started “serious pre-contract work” in Saudi Arabia, Qatar, Bahrain, and Niger, areas where it previously did little to no work.

Instead of Russia being penalized for its military role in Syria, which has resulted in disastrous consequences for civilians there, Rosoboronexport’s fortune gives fulfillment to the traditional Arabic saying that “one person’s disaster is another person’s profit.”

Under international law, providing weapons to Syria while its forces are known to be committing war crimes and crimes against humanity may translate into aiding and abetting the commission of those crimes. Arms suppliers could bear potential criminal liability as an accessory to those crimes and could face prosecution.

The reason for this new-found interest in Russian weaponry? “It’s no wonder Middle Eastern countries want to buy Russian weapons that have proven to be effective,” Kozhin said. “The Syrian [civil] war, what is unfolding in Egypt, on the Sinai Peninsula, in Libya and neighboring countries is spurring on huge demand for modern weapons.”

Vladimir Shamanov, the head of the Russian Duma’s defense committee, concurs. He has made the case that the more than 200 new types of weapons Russia has tested in Syria have created a greater demand for Russian weapons. “It’s not an accident that today they are coming to us from many directions to purchase our weapons, including countries that are not our allies,” he said.

Human Rights Watch has for years called on Rosoboronexport to stop its arms dealings with the Syrian government and has also urged the international community to limit the company’s opportunities for sales.  Instead, Rosoboronexport is still cynically marketing weapons battleground tested in Syria at numerous fairs while civilians suffer from them in Syria.

To take one example, at the HeliRussia-2017 arms show in Moscow in May of 2017, Rosoboronexport showcased Takhion and Orlan-10E drones, as “foreign customers’ interest in them has risen after their successful use in combat conditions during the anti-terror operation of the Russian air task force in Syria,” according to a Rosoboronexport statement published by the Russian news agency TASS.

The Russian government began conducting military operations in Syria on September 30, 2015. Since then, Russian-Syrian airstrikes have hit civilian facilities and caused hundreds of civilian casualties.

Syrian-Russian joint military operations have extensively used internationally banned cluster munitions, in some cases Soviet-made, as well as incendiary weapons, which cause excruciatingly painful burns that are difficult to treat, and start fires that destroy civilian objects and infrastructure. There is compelling evidence that Russian government aircraft have delivered incendiary weapons in Syria, or at least have participated in incendiary weapons attacks by the Syrian government.

In 2016, Russian and Syrian forces bombarded parts of the northern Syrian city of Aleppo held by anti-government groups, including with indiscriminate barrel bombs, cluster munitions, and incendiary weapons. Today these indiscriminate attacks are continuing in Eastern Ghouta, 15 kilometers from the Syrian capital Damascus.

According to the Stockholm International Peace Research Institute (SIPRI), Russia delivered ten T62 tanks to Syria in 2017, under a deal made in 2016.

Coming into 2018, Rosoboronexport has announced that it plans to expand its participation in arms shows, at five venues in the Asia-Pacific, three in the Middle East, three in Commonwealth of Independent States (CIS) countries, two in Europe, and one in South Africa. For the first time, it plans to participate in the Asian Defense, Security and Crisis Management Exhibition and Conference in Manila, Philippines, in September.

Given Russia’s role in Syria, countries hosting international arms shows should not allow Rosoboronexport to promote itself and seek new contracts at their state-sponsored events.

In 2018, Rosoboronexport is planning to participate in shows in, Armenia, Azerbaijan, Kazakhstan, China, the Philippines, Indonesia, India, Pakistan, South Africa, two in Chile, Bahrain, Qatar, Jordan, and two in France. The arms show in the Philippines is officially endorsed and supported by the United States Department of Commerce and US Commercial Service.

If Rosoboronexport is permitted to participate in the shows, participants, including official delegations and private arms brokers, should decline to negotiate any new deals with it.

Countries need to send a clear message to the Russian government that it will not be business as usual as long as it continues to further rights violations in Syria.