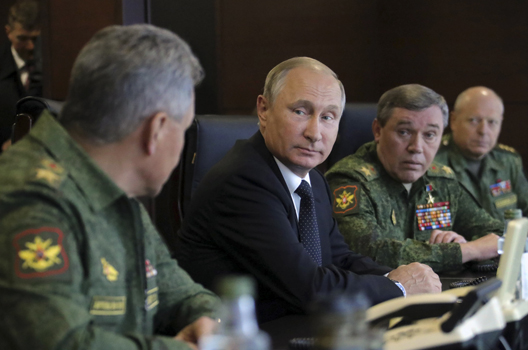 A law drafted by Russia’s ministry of defense, which would ban its soldiers’ use of social media, serves to confirm the work of open-source researchers reporting on the illicit presence of Russian troops in Ukraine and Syria, according to Atlantic Council analysts.

“The Russian authorities and media have repeatedly tried to undermine open source researchers by arguing that they ‘only’ used social media,” said Ben Nimmo, an information defense fellow in the Atlantic Council’s Digital Forensic Research Lab (DFRLab). “This shows Russia knows the researchers were right.”

The ban, which serves to corroborate reports of Russian troops’ activity denied by the Kremlin, “confirms the value, and the power, of open-source research,” according to Nimmo. “It’s a validation of the work that they’re particularly nervous about it,” said Graham Brookie, deputy director of the DFRLab, adding: “As this work gains notoriety, [the Kremlin’s] public posture against it increases.”

As first reported by the BBC, the initial draft of the law, set to go into effect in January 2018, would prohibit Russian professional military personnel, not conscripts, from uploading to the internet photos, videos, or other material which could reveal details about Russia’s military activity.

The Kremlin “knows this is a problem that they face, and they’re grasping at how to deal with it,” said Brookie. “It’s interesting that the Ministry of Defense drafted a law to codify this ban on soldier selfies rather than issuing a military order to stop the behavior,” he added.

“It’s a censorship law, essentially,” Brookie said. “On a tactical basis, they will have difficulty enforcing the ban,” he added.

Nimmo described how, in the past, the private posts of Russian soldiers have made public the details of troop movements in Ukraine and Syria. “Social media posts have provided crucial evidence of Russian military operations in Ukraine and Syria, including operations the Russian government denied conducting,” he said. Open-source research organizations such as the DFRLab and Bellingcat leveraged the publicly available information to reveal a cohesive picture of Russian military activity abroad and implicate the Kremlin. According to Nimmo, “it looks like the Kremlin wants to get better at covering its tracks.”

When Russian President Vladimir Putin denied reports of Russian military involvement in the invasion of Ukraine in 2014, as well as the ongoing fighting in the eastern part of that country, an Atlantic Council report by the DFRLab, Hiding in Plain Sight, presented evidence to the contrary. The report accumulated open-source research, largely consisting of information available on the social media platforms of Russian soldiers, to confirm the presence of Russian troops in Ukraine.

Another Atlantic Council publication, Breaking Aleppo, employed the same means to counter Putin’s claims regarding Russia’s role in Syria. Where the Kremlin claimed its bombardment of the city of Aleppo, nearly destroyed in 2016, aimed to eradicate terrorists, the analysis of open-source information such as satellite images showed that the Russian military repeatedly bombed hospitals. The evidence presented appears to indicate Russia’s collusion with Syrian President Bashar al-Assad and his war on the Syrian people.

The work of open-source researchers, using social media as evidence, sheds light on the discrepancies between what Putin says about Russian military activities and where his soldiers are working around the world. “In these cases, open-source research worked in uncovering things that the Russians weren’t particularly transparent about in the international forum,” said Brookie. Nimmo claimed that the ban on selfies testifies to the validity of their reports.

“The ban really underlines how important open-source evidence is, and how much the exposure has stung the Kremlin, especially ahead of next year’s presidential election,” said Nimmo.

Ultimately, according to Brookie, social media provides a platform for soldiers to disseminate information that is not Kremlin-approved. While Russian forces want their military operations to remain covert, an errant selfie “gives [the Russian government] less of an ability to conceal their actions, [and] control their message and how they are perceived by the international community,” said Brookie.

Maks Czuperski, director of the DFRLab, said the Kremlin will encounter difficulties in its attempt to enforce the ban. “Initially we might see this ban working, but it will be hard to enforce as young soldiers become ever more active on social media privately,” he said.

“You can’t suppress people’s desire to share and be connected,” Czuperski added.

According to Nimmo, “it’s unlikely the authorities will be able to stop all their soldiers posting; it’s just too tempting.” In addition, he said, “even if the soldiers stop posting, there’s nothing to stop civilians posting about them.” Posts from sources other than the troops themselves, such as civilians or the loved ones of soldiers, “are all things within this information environment that [the Kremlin is] not going to be able to take down any time soon because it’s not realistic,” said Brookie. “They’re not going to be able to take down the internet,” he said.

However, “social media posts are only one open-source research tool to reveal what Russians or any nefarious actor on the international stage is doing,” said Brookie.

With alternative avenues to continue gathering information on Russian military activities, Brookie said “it remains to be seen how effective this ban will be, but I think it’s more complicated than stopping a few selfies.”