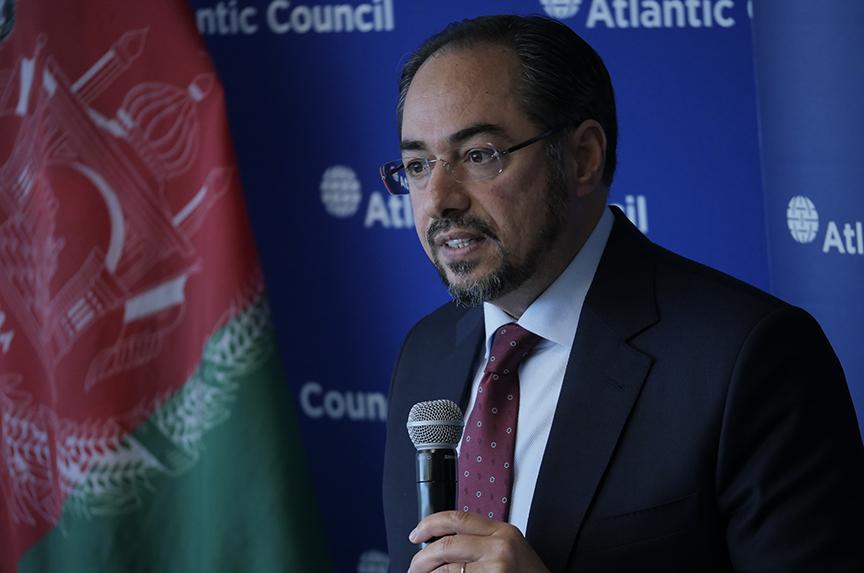 Russia’s support for the Taliban—a terrorist group with which the United States has been at war for more than fifteen years and that is dedicated to overthrowing Afghan President Ashraf Ghani’s government—is causing considerable unease in Afghanistan where officials worry it will undermine efforts to make peace in their war-torn country.

“[E]stablishing contacts with these terrorist groups will give them a wrong message and they will think that the international community is recognizing them,” said Salahuddin Rabbani, Afghanistan’s foreign minister and a former head of the country’s High Peace Council. This, in turn, would undercut a peace and reconciliation process because the Taliban “will not be encouraged to come to the negotiating table,” he added.

The peace process has had scant success in part because, as Rabbani noted, Afghanistan’s eastern neighbor, Pakistan, continues to provide material support and sanctuary for the terrorists.

Rabbani, who was in Washington to attend a meeting of foreign ministers from sixty-eight nations that are part of a coalition fighting the Islamic State of Iraq and al-Sham (ISIS or Daesh) spoke in an interview with the New Atlanticist on March 21. Earlier that day, Rabbani delivered a public address at the Atlantic Council and participated in a discussion moderated by Javid Ahmad, a fellow in the Atlantic Council’s South Asia Center.

Rabbani said he would welcome any attempt to bring peace and stability to his country, but that such an effort must be conducted through the Afghan government. “Only an Afghan-led and owned peace and reconciliation process is acceptable to Afghans and has a chance of success,” he said.

Russia has, meanwhile, invited the United States to a multilateral conference on Afghanistan to be held in Moscow on April 14.

Russia’s expanding role in Afghanistan—particularly its support for US enemies—is likely to make it difficult for US President Donald Trump to make the case for counterterrorism cooperation with Moscow. This dynamic has also added Afghanistan to a growing list of regions where Russia and the West are odds.

In December 2016, Gen. John Nicholson, the top US commander in Afghanistan, told reporters that Russia had joined Iran and Pakistan as countries with a “malign influence” in Afghanistan.

Russian Security Council Secretary Nikolai Patrushev sought to assure Afghan National Security Advisor Haneef Atmar in a meeting on March 17 that Moscow is working to promote stability in Afghanistan. However, Afghan officials are not entirely convinced by that argument.

Moscow claims that its material support for the Taliban is intended to keep ISIS from crossing into Russia. ISIS has established a foothold in Afghanistan’s eastern Nangarhar province and Russia believes the group will eventually threaten its national security interests. Taliban is considered an adversary of ISIS. Rabbani, however, noted that “Taliban and Daesh are more or less the same thing.”

“Most of the members of Daesh today were members of the Taliban yesterday. They have just rebranded and changed their flags,” he said. “Most of the Daesh elements in certain parts of Afghanistan have a symbiotic relationship with the Taliban; they support each other.”

Early in his presidency, Ghani expended a considerable amount of political capital in a fruitless attempt to improve ties with Pakistan. He sought to convince Pakistan to end its support for terrorists and deliver Taliban leaders to the negotiating table.

Pakistan’s support for terrorist groups comes in many forms, chiefly the provision of sanctuaries within Pakistan—the Taliban’s senior leadership is based in the northwestern Pakistani border city of Quetta.

Rabbani, whose father, the late Afghan President Burhanuddin Rabbani was assassinated by a suicide bomber in Kabul on September 20, 2011, said Pakistan must eliminate the terrorist safe havens.

Pakistan should also end its policy of classifying terrorists as “good” or “bad” and instead focus on eliminating all terrorists, the minister said. Pressure on Pakistan from the international community, particularly the United States, could help achieve this objective, he added.

In February, Nicholson told the Senate Armed Services Committee that more US and NATO troops are needed in Afghanistan. Sens. John McCain (R-AZ) and Lindsey Graham (R-SC) have made similar calls. Most NATO forces pulled out of Afghanistan in 2014. Some 8,400 US service members remain.

Rabbani said of the calls for additional troops: “I think it will certainly help, but I think that is a tactical decision. To win this war, we need a broader and deeper involvement and that means we should have a winning strategy.”

An increase of troops will send a positive signal to the Afghan people and a firm message to the Taliban that the United States is “not abandoning Afghanistan,” the minister said.

Salahuddin Rabbani spoke in an interview with the New Atlanticist’s Ashish Kumar Sen. Here are excerpts.

Q: Does your government support the covert contacts between Russia and the Taliban?

Rabbani: Any country that can play a positive role in bringing peace and stability, we welcome it, but it has to be through the state. Only an Afghan-led and owned peace and reconciliation process is acceptable to Afghans and has a chance of success.

We would highly encourage our Russian friends to support the Afghan peace and reconciliation process, but we also say that establishing contacts with these terrorist groups will give them a wrong message and they will think that the international community is recognizing them; they will not be encouraged to come to the negotiating table. We certainly don’t agree with that if that is the aim of those countries that have established contacts with the Taliban.

Q: Are you calling on Russia to end these contacts because it will jeopardize the peace process?

Rabbani: If the Russians want to see stability and peace in Afghanistan they have to work with the Afghan government and put pressure on those countries who harbor terrorists and their leaders.

Q: You are in Washington for a meeting on countering ISIS. What do you consider a bigger threat to Afghanistan—ISIS or the Taliban and the Haqqani Network?

Rabbani: The biggest challenge that we have is that there are twenty designated terrorist groups in Afghanistan and in the region. We think that the international community, the neighbors of Afghanistan, should make a joint strategy to fight [these groups] because this is not just a problem for Afghanistan. Most of these terrorist groups are organizations from neighboring countries—IMU [the Islamic Movement of Uzbekistan] is a terrorist organization which is based in Uzbekistan, ETIM [the East Turkestan Islamic Movement] is a Chinese terrorist organization, there is Lashkar-e-Jhangvi or TTP [Tehrik-e-Taliban Pakistan or the Pakistani Taliban] and many other groups who are not Afghans. These groups are fighting in Afghanistan and the Afghan government is fighting against them on behalf of the international community. So, the Afghan government should be supported.

Taliban and Daesh are more or less the same thing. Most of the members of Daesh today were members of the Taliban yesterday. They have just rebranded and changed their flags. Most of the Daesh elements in certain parts of Afghanistan have a symbiotic relationship with the Taliban.

Q: Is Pakistan doing enough to shut down terrorist sanctuaries and end its support for terrorist networks?

Rabbani: Unfortunately, we haven’t seen signs of that yet. If they start, it would be a good message for Afghanistan, the region, and the international community.

Q: What do you believe will it take to bring about the paradigm shift you seek in Pakistan’s behavior in your region? Can US pressure on Pakistan—perhaps in the form of sanctions—be helpful?

Rabbani: Some kind of international pressure on Pakistan is important. Today, Pakistan itself is suffering from terrorism. It would be good if they join hands with Afghanistan to jointly fight against this problem and not believe that terrorists can be divided into good and bad terrorists. They are all terrorists and they should all be dealt with in the same way. They shouldn’t be given a priority—supporting one and not supporting the others. A stronger message from the international community, particularly the United States, can send a good signal for a paradigm shift.

Q: Does Pakistan have the ability to deliver credible Taliban leadership to the peace talks?

Rabbani: Some Taliban leadership is in their captivity, such as Mullah Baradar. I think he should be delivered to Afghanistan. [The Taliban] are openly operating from Quetta in Baluchistan. Their chain of command is all based in Quetta, so I think [Pakistan] is in a much better position to deliver them to Afghanistan.

Q: Last year, with the death of Taliban leader Mullah Mansour in a US drone strike there were reports of rifts emerging within the Taliban. What is your assessment of the Taliban today? Is it a cohesive force?

Rabbani: There are differences between the Taliban. There are groups who support the peace process and there are groups who still believe that they can win militarily. Afghanistan has kept the doors of peace open for those who want to come to talks. We are ready to talk with them if they renounce terrorism, cut their ties with international terrorist groups, lay down their arms, and accept the Afghan constitution.

Q: What kind of success have you had in your effort to reach out to elements in the Taliban that support peace?

Rabbani: We are getting some messages, but it depends on the countries that support them to put some pressure on those elements. We have received some signs that not all of them but some members have been showing an interest in talks.

Q: What are your expectations from the Trump administration as far as the US-Afghanistan relationship is concerned?

Rabbani: I think the United States recognizes that abandoning Afghanistan is certainly not an option at this stage. It is important that the sacrifices that they have made both in terms of blood and treasure to see Afghanistan as a peaceful, stable country in which there are no terrorist sanctuaries, this investment shouldn’t be forgotten. There should be more involvement of the US in Afghanistan.

From the Afghan side, our forces have been fighting against [terrorist] elements. They need [the] support of the international community, and particularly of the United States, and we are grateful that the United States has given us in the past and continues to give us support even today to our national defense and security forces.

Rabbani: I think it will certainly help, but I think that is a tactical decision. To win this war, we need a broader and deeper involvement and that means we should have a winning strategy.

Q: Do you see an appetite in Washington for such engagement?

Rabbani: One thing that we see in Washington is a strong resolve and determination of the current US administration to fight against terrorism. Afghanistan as a frontline state against terrorism is a place to start. I think that they will take it seriously. In the contacts that President Trump had with President Ghani the messages that came were encouraging.

Image: Russian support for the Taliban runs the risk of emboldening the terrorists who “will not be encouraged to come to the negotiating table,” Salahuddin Rabbani, Afghanistan’s foreign minister, said in an interview at the Atlantic Council in Washington on March 21. (Atlantic Council/Bradley Howard)