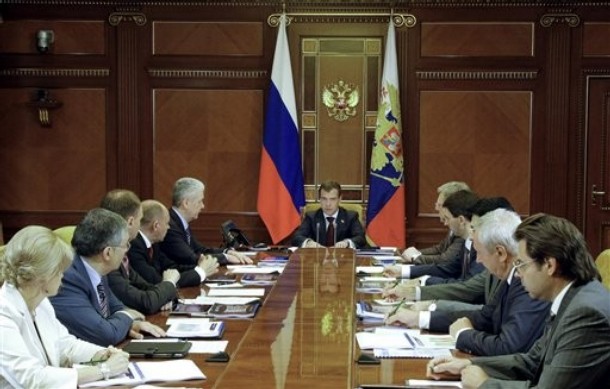 As America defeated Algeria to advance in the World Cup, Russian President Dmitry Medvedev arrived in California to kick off a round of intense diplomatic activity. Smiling, he toured Silicon Valley in search of money and technology. Still smiling in Washington, he accepted US President Barack Obama’s backing for Russian membership in the World Trade Organization. But then the match took an unforeseen twist—US Secretary of State Hillary Clinton arrived in Tbilisi to re-assert America’s interest in Georgia and the South Caucasus region. She scored a huge goal—but does Washington fully understand the game it is playing?

In advance of Medvedev’s American trek, some observers reasoned that, having pushed its former empire into line, Russia could afford to smile in hopes of help for its third world economy.  The west salivates at the prospect of more Russian commercial deals and grasps at anything that smacks of quiet on the eastern front.  Obama’s “reset” policy shovels American concessions toward Moscow in return for diplomatic ephemera.

Medvedev even managed a brief scowl on the eve of his departure for America.  Referring to the US base at Manas, Kyrgyzstan, vital to the NATO effort in Afghanistan, Medvedev told the Wall Street Journal, "This base, and this is my position and I say it openly: It shouldn’t exist forever."

Regarding Iran’s nuclear weapons program, Russia voted for a new round of United Nations sanctions, but only after negotiating for months to soften the measures and to extract concessions from Washington.  Since then, Moscow has carped at every western move to stiffen the sanctions.

And on Georgia, the Russian bear has not lost its growl.  Just a day before Medvedev landed in America, Russian Foreign Minister Sergei Lavrov gave an interview to the London Telegraph designed to back Obama away from any strong stance on Georgia’s territorial integrity.

“The issue has been solved finally and irrevocably,” Lavrov said.  “I have said more than once that it was not our choice and that any remaining claims should be addressed to Mikheil Saakashvili, who has trampled Georgia’s territorial integrity underfoot…The present contingents of Russian troops in South Ossetia and Abkhazia are there legally…Russia has complied with that part of the Medvedev-Sarkozy plan.”

Regrettably, Washington—and this did not begin with the Obama Administration—often reacts to such challenges with equanimity, as if candor and goodwill will alter Moscow’s position.  This pits apparent American naïveté against Russian policies molded by Moscow’s perception—correct or incorrect—of geopolitical reality.

Appearing with Medvedev, Obama told a June 24 White House press conference, “Our two countries continue to disagree on certain issues, such as Georgia, and we addressed those differences candidly.  But by moving forward in areas where we do agree, we have succeeded in resetting our relationship.”

Ten days later, Clinton appeared in Tbilisi.  “The US is steadfast in its commitment to Georgia’s sovereignty and territorial integrity,” she said, referring several times to Russian invasion and occupation of Georgian territories.  “The US does not recognize spheres of influence.”

Russian Prime Minister Vladimir Putin quickly rejoined.  “There is no need to seek solutions on the side.  Some think that [the Georgian territory] has been occupied, while others think it has been liberated.  It is the subject of talks between the peoples of Georgia and South Ossetia, and they should conduct this dialogue without referring to third parties.”  At least momentarily, Clinton’s words wiped the smile from the Kremlin’s face.

Now we shall see if Washington fully understands the weight of its words.  Meanwhile, Clinton told a Tbilisi audience, “I would strongly urge that Georgia not be baited or provoked into action that would give any excuse to the Russians to take any further aggressive movements.”

This statement alone is a breakthrough because it acknowledges that, despite “reset,” Russia remains an easily provoked aggressor.   Russia smiles, but what really provokes it are the “vibrant, effective” Georgian democracy and economy that Clinton no doubt sincerely advocates.