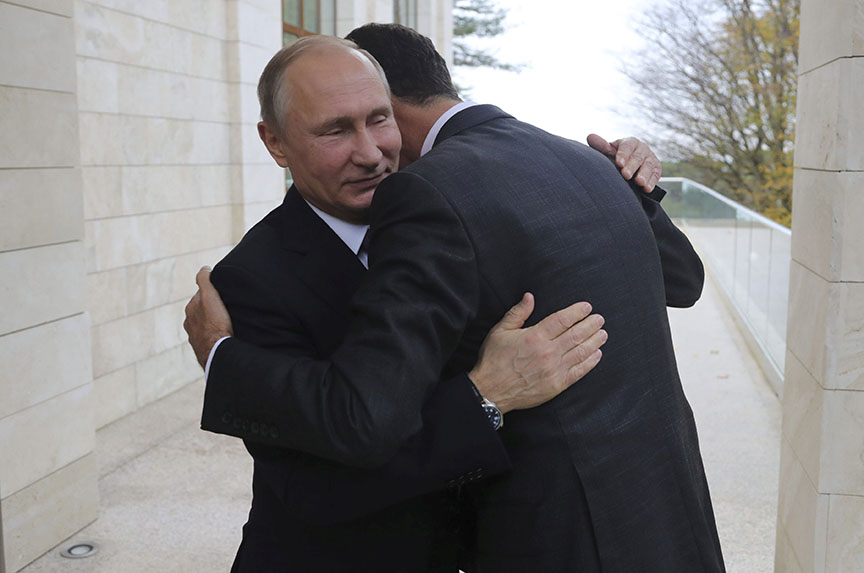 Reporting out of Moscow suggests that some number of armed Russians—up to 200—were killed by the US-led, anti-ISIS coalition after crossing the Euphrates River deconfliction line in eastern Syria on February 7.  If the reports are true, this was by far the bloodiest incident for Russian personnel since Moscow’s military intervention in Syria at the end of September 2015.

The degree to which the Kremlin knew in advance of the ill-advised fording of the Euphrates is not clear.  American military sources say that communications between them and Russian counterparts in Syria never broke down, and that the Russian air force never intervened on behalf of the invaders.

Although Moscow quickly released propagandistic talking points in the operation’s wake about American lust for Syrian oil resources and American disinclination to fight the Islamic State of Iraq and al-Sham (ISIS, ISIL, Daesh, Islamic State), the Kremlin’s reaction to Russian casualties has been muted.  Some reports have suggested that the casualties were top heavy with Chechens. Others held that the attacking force was comprised of personnel from around the former Soviet Union.  Still others opined that the attackers were mercenaries operating on a long leash from the Kremlin.

One would have expected that a probe of this nature would have exclusively employed Afghan and Iraqi mercenaries recruited by Iran.  To date these have been the expendables—the cannon fodder—of choice within pro-Assad regime ranks.  Yet there are reports suggesting that, in addition to Russian casualties, a regular unit of the Syrian army was hit hard.  Assad’s army is depleted to the point where it is beyond surprising that regular units would be fed deliberately into a meat grinder.

That Assad regime-affiliated units might test the resolve of those trying to stabilize eastern Syria is not at all shocking.  Ali Akbar Velayati, foreign policy advisor to Iran’s supreme leader, recently told Iran’s Mehr News Agency: “Either they [the Americans] will leave Eastern Euphrates in Syria or we will kick them out.”  Perhaps the probe of February 7—notwithstanding the composition of the attacking force—was aimed at testing the willingness of defenders to defend.  The test results should at least persuade Mr. Velayati that asymmetric means of countering the post-ISIS stabilization of eastern Syria are more likely to succeed than frontal assaults.

Indeed, where Russian and Iranian interests converge in Syria is in their joint determination to expel the United States from Syria and from the region more broadly.  For over three years, the US-led anti-ISIS coalition—of which Russia, Iran, and the Assad regime are NOT members—has fought to rid eastern Syria of the fake caliphate and the collection of thieves, murderers, and rapists it has attracted to Syria.  During this time Russia, Iran, and the Assad regime have paid little attention to ISIS, concentrating their firepower instead on saving Assad through a campaign of collective punishment, one featuring mass homicide.  That they should now seek to aid the resurrection of ISIS by trying to undermine the stabilization of territory liberated from the caliphate is not at all surprising.

In December 2017, Russian President Vladimir Putin awarded himself a “mission accomplished” moment and announced—for the second time since September 2015—that Russian forces would be withdrawn from Syria.  No doubt the target audience for this piece of disinformation was a Russian electorate whose support he seeks in the March 2018 presidential election.

Even though Russian losses in Syria have been minimal, a kleptocratic regime will always fear the growth of popular sentiment to the effect that scarce resources are being squandered on useless foreign adventures.  Indeed, the leaders of Iran—such as they are—heard this message loud and clear during a recent wave of protests.  Putin has heretofore been able to neutralize this argument domestically by claiming that Moscow’s success in propping up the unimpressive Mr. Assad is Exhibit A of Russia’s return to great power status.  The Kremlin’s muted reaction to the botched operation of February 7 is, in this sense, fully understandable.

Russia’s determination to remain militarily in Syria until Bashar al-Assad is fully secure is likewise fully understandable.  Yet even if all of Assad’s enemies were to disappear today, and even if the United States were to abandon the stabilization of eastern Syria tomorrow, Russia’s client would be presiding over a smoking pit.  Neither Moscow nor Tehran has the resources to or the interest in rebuilding that which they have helped to destroy.  They can be counted on to try blackmailing a Western Europe fearful of a migratory wave like that of 2015.

The exact truth lurking behind the disastrous assault of February 7 may never been known.  What could the attackers have been thinking?  Did they really believe that American forces would permit the Euphrates deconfliction line to be breached?  Maybe so.  Perhaps they confused it with a red line of bygone years.