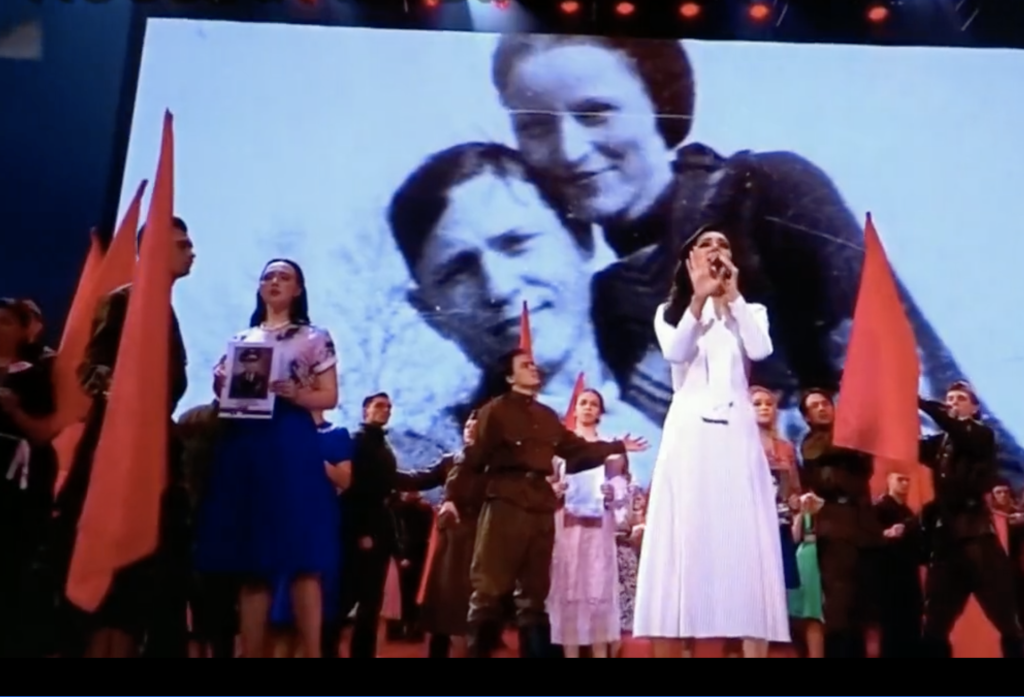 As Russia continues its assault on Ukraine, the Atlantic Council’s Digital Forensic Research Lab (DFRLab) is keeping a close eye on Russia’s movements across the military, cyber, and information domains. With more than seven years of experience monitoring the situation in Ukraine, as well as Russia’s use of propaganda and disinformation to undermine the United States, NATO, and the European Union, the DFRLab’s global team presents the latest installment of the Russian War Report.

On May 9, as Russia commemorated the defeat of Nazi Germany, state broadcaster Channel One aired the concert to a nationwide audience. Throughout the performance, the channel displayed a backdrop of black-and-white photographs allegedly depicting Soviet WWII veterans and other people affected by the war. One of the photographs, however, featured Bonnie and Clyde, which social media users quickly identified. The photograph can be found on the Wikipedia’s profile of the couple, who were killed in an ambush by US law enforcement in May 1934, more than five years before the start of the war.

The initial footage aired by Channel One included a close-up shot of the moment when the photograph was displayed at the concert. The DFRLab compared the footage with the online version of the concert that was later posted to the Channel One website. The online version appears to be edited; rather than displaying the close-up of the photo, it now only shows it from a distance. The Bonnie and Clyde photograph, however, is still briefly visible.

While a majority of state-owned and pro-Kremlin outlets did not cover the incident, some rushed to claim that it was “sabotage” aimed at embarrassing the state broadcaster. According to rosbalt.ru, a statement from Channel One’s press service insisted that that the channel “only broadcasted the concert and had nothing to do with its production.”

It is not the first time that official Russian agencies had used incorrectly sourced footage and presented it as legitimate. In 2017, the Russian Ministry of Defense published screengrabs from a video game, which it presented as “irrefutable evidence” that the United States was colluding with the terrorist organization ISIS.

As Russians gathered in Moscow’s Red Square on May 9 to mark Victory Day, the Ukrainian port city of Odesa experienced Russian bombardment. According to the Telegram channel of Ukrainian state news agency Ukrinform, Russia shelled Odesa with Onyx missiles launched from the Bastion missile complex in the Crimean Peninsula.

At the time of the attack, European Council President Charles Michel was attending a meeting with Ukrainian Prime Minister Denys Shmyhal in Odesa. A European Union official told CNN that the pair “needed to interrupt the meeting to take shelter as missiles struck again the region of Odesa.” Photos of Michel and Shmyhal in a bomb shelter later surfaced online.

Ukrainian Channel 24 reported that two people were injured during the shelling, which also destroyed five buildings. The report said three Kinzhal hypersonic missiles were fired from a Tupolev Tu-22 strategic bomber. A video showing the impact of the missiles appeared online soon afterwards. Additional footage captured a damaged residential neighborhood, while another set of photos revealed extensive damage in an industrial area.

As the Kremlin continued its May 9 celebrations marking World War II’s Victory Day, anti-war Russians marked the occasion with acts of protest.

Early that morning, two journalists at the Kremlin-controlled media outlet Lenta.ru published roughly twenty articles criticizing Russian President Vladimir Putin for starting the war in Ukraine. Among the headlines were “It is easy to cover economic failure with war,” “Russia is abandoning bodies of its fallen soldiers in Ukraine,” and “Zelenskyy turns out to be cooler than Putin.” Lenta removed the articles, but not before its homepage was archived; social media users also shared screenshots.

The two journalists responsible for publishing the articles were Egor Polyakov, a reporter focusing on Lenta’s economics and housing coverage, and Alexandra Miroshnikova, who serves as editor for both topics. In an interview with the independent Russian media outlet MediaZona, Polyakov said he was motivated by his “conscience” to spread “reverse propaganda.”

That same day, viewers of Russian television were also confronted with anti-war messages, the result of hacking targeting several channels and television programs. “On your hands is the blood of thousands of Ukrainians and their hundreds of murdered children,” one message read. A Twitter account affiliated with the hacker collective Anonymous amplified the television hack, but it is unclear if the group was involved.

Meanwhile, every May 9, an “Immortal Regiment march” commemorates those who fought and died during World War II. This year, some Russians used the occasion to express dissent. In St. Peterburg, Sergey Samusev, a municipal politician, was detained for displaying a poster of Boris Romanchenko, a 96-year-old Holocaust survivor killed by Russian shelling in Kharkiv, Ukraine. In Moscow Oblast, Ekaterina Voronina was detained for carrying a poster with an image of her grandfather and text that read, “Grandfathers said ‘I wish there was no war’,” and “He did not want to repeat it” – a reference to the slogan “We can repeat it,” which often used in Victory Day rallies to connote Russia’s ability to fight Nazis. In the city of Moscow, a man was detained for a poster positioned beside a box of candy that said, “Take a treat if you are against the war.” And in Novosibirsk, police detained a man for carrying a poster showing a soldier doing a face-palm with the accompanying text, “I am ashamed of you, grandchildren! We were fighting for peace, but you chose war.”

Overall, an estimated 125 people were detained on Victory Day, reported OVD-Info, an independent Russian media outlet. Of that, eighty-two were detained for using anti-war symbols and carrying out acts of protests, while forty-three were reportedly detained for past activities unrelated to protests, or for “preventive measures.”