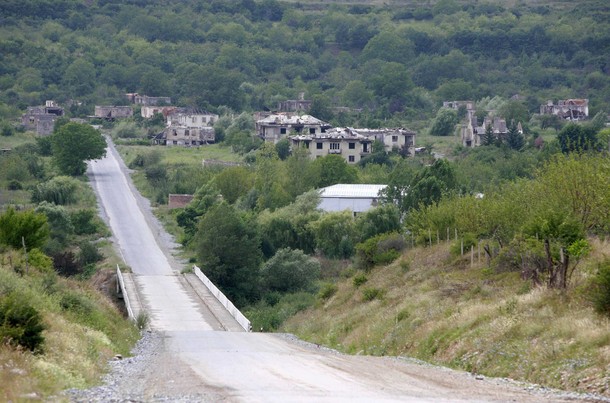 The Paris Court of Commerce last week handed a victory to the Russian propaganda machine, allowing French satellite operator Eutelsat—one quarter French Government-owned—to bar Tbilisi-based First Caucasus Television from one of its broadcast satellites.  For now, this prevents First Caucasus from reaching most of its intended Russian-speaking audience.  Nonetheless, the station is determined to get back on the air, which will strike a blow for media freedom everywhere.  Meanwhile, the saga of First Caucasus Television evokes some worthwhile observations.

The saga originates in early 2008 when Russia began preparing its invasion of Georgia.  For six months, logistics were laid.  Land, sea and air forces were mobilized, trained and exercised.  “Volunteers” were recruited.  Heavily armed Russian troops reinforced so-called peacekeepers in the breakaway Georgian territories of Abkhazia and South Ossetia.  Medical capabilities, fuel and armaments were pre-positioned in the territories.  Beginning on August 2, a crowd of journalists was emplaced in Tskhinvali, the administrative center of South Ossetia.

The stage was set for the August 7 invasion.

Off stage, Russian forces executed their war plan, including attacks on civilians, complemented by looting, vandalism, rape, murder and, ultimately, ethnic cleansing and occupation.  On stage, the Russian propaganda machine presented a tragicomedy of Georgian aggression, even “genocide,” in which Russia alternated between the roles of victim and savior.

Many westerners bought it; most Russians bought it.  Indeed, many Russians believe that Georgia is a large, aggressive, CIA-run country, seething with American Marines and terrorists poised to strike poor Russia.  Misled about Georgia, they are unaware that Russian policies and actions in the North Caucasus may soon drag the entire region into disaster.  As in Soviet times, many people no doubt suspect that they do not know the truth, but they have not the means to learn the truth. The Kremlin controls or intimidates the Russian-language media.

First Caucasus Television was conceived as “the first Russian language television station in the Caucasus that is not controlled by the Kremlin.”  Part of Georgian Public Broadcasting (GPB), it would focus on the North Caucasus, but also present content interesting to Russian speakers across the former Soviet space.  By late 2009, the station was ready to broadcast.

On December 14, GPB and Eutelsat concluded a €600,000 per year five year contract to broadcast via the French company’s W7 satellite.  A week of trial broadcasts began on January 15.  And the Russian propaganda machine was ready.

Speaking in the North Caucasus Republic of North Ossetia on January 14, Russian Deputy Interior Minister Arkady Yedelev said, “The closest attention should be paid to a brainchild of the Georgian propaganda machine…sponsored by the American structures…the television channel is definitely directed toward planting an anti-Russia, anti-state stance and the ideology of extremism.”

Finally, Eutelsat said, Intersputnik offered “a firm contract for significantly more capacity than that requested by the Georgian broadcaster.”  Precise figures are difficult to find, but sources say that Intersputnik’s business with Eutelsat may be worth €200 million.

Eutelsat offered to host First Caucasian on its W2A satellite, a red herring designed to deflect suspicions.  Television broadcast satellites orbit the earth 35,786 kilometers above the equator at a speed that keeps them always above the same location on earth.

W7, the originally contracted satellite, orbits at 36o East, above Kenya, in East Africa.  Moving north, the 36o East line roughly passes through Kharkiv, Ukraine and Moscow, making it, in the words of Eutelsat’s website, “a key orbital location for TV broadcasting in Russia, the CIS, Central Asia and Africa.”  In contrast, W2A orbits at 10o East, above Gabon, in West Africa.  The 10o line roughly passes through Milan and Frankfurt, again quoting the Eutelsat website, “serving Europe, North Africa and the Middle East.”

Understandably, GPB refused.  Instead, it asked the French courts to enforce its contract with Eutelsat, which maintained that there was no valid contract with GPB.  The Paris Commerce Court apparently found sufficient defects in the contract to rule in Eutelsat’s favor.

It would be naïve, however, to believe that this was a routine court case, decided on technical merits.  The French Government is unlikely to have stood by on a matter so diplomatically delicate with a partially government-owned company before a French court.

Arguably legal in France or not, the real story here is that Eutelsat booted First Caucasian as a result of some combination of Russian money and pressure, likely with at least the acquiescence of the French Government.

And this is just one episode in the ongoing global information struggle, which prompts three observations.

First, despite the vogue for blather about globalization, vast chunks of humanity still live in informational black holes.  It is no coincidence that controversy also swirls around Eutelsat for shunning television broadcasts aimed at China and Iran.  This underscores the need for efforts such as First Caucasian, Radio Free Europe and many others.

Second, these efforts are sorely needed for Russian-speaking audiences, most of which live in informational black holes.  In particular, having stamped out media freedom at home, the Russian propaganda machine reaches abroad with money and threats to stifle any hope of free information reaching people in Russia.

Third, many in the West are all too eager to clasp the hand of Russian repression.  The saga of First Caucasian Television unfolds in France, but, honestly, similar things can—and do—happen in other western countries.  A quip probably apocryphally attributed to Lenin is as applicable today as it was ninety years ago: "The Capitalists will sell us the rope with which we will hang them."

Let us hope that First Caucasian finds another satellite before that happens.