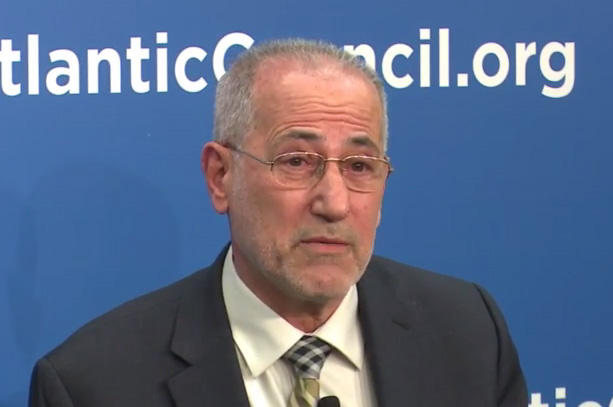 “The onus is on the Saudi royal family to deprive the Wahhabi religious establishment in Saudi Arabia of money, power, and status,” said Mowaffak al Rubaie, a former National Security Advisor of Iraq who currently serves as a member of parliament in Baghdad. (Atlantic Council/Samuel Skove)

Most important factor in the war on ISIS is theological, says Mowaffak al Rubaie, a former National Security Advisor of Iraq

Mowaffak al Rubaie is a former National Security Advisor of Iraq who currently serves as a member of parliament in Baghdad.

In this interview with the New Atlanticist’s Ashish Kumar Sen, Rubaie discusses the war on the Islamic State of Iraq and al-Sham (ISIS), also known as ISIL and Daesh; the danger posed by Wahhabism; the implications for Iraq of the Iran nuclear deal; and much more. Here are excerpts from our interview.

Q: What is your assessment of President Obama’s Syria and Iraq strategy?

Rubaie: There was a very clear strategy of withdrawing from Iraq at any cost, regardless. That was probably trying to fulfill an election promise. But after that when the Syrian uprising started, and was then hijacked by terrorists, what made things complicated in Iraq and Syria was that this terrorism spread from Syria to Iraq again. We had the June 2014 disaster of Daesh storming four provinces in Iraq. [The Obama] administration has started to think seriously and gradually they increased their engagement in the two countries, but unfortunately with a lot of reluctance.

For example, in Iraq it was a political decision rather than a national security decision to walk out at the end of 2011, after the SOFA [Status of Forces Agreement] expired. Eighteen months after the pullout Daesh stormed four [Iraqi] provinces.

In the last few years, the US administration has looked at the war in Iraq and in Syria as if it is two wars and two different enemies and two different contributing factors. Well, I am sorry, it is the same war, the borders are only imaginary, it is the same enemy. You can’t have [the United States] fighting on the side of Iran in Iraq and against Iran in Syria. So the two policies on both sides of the border were not synchronized.

[The Obama] administration missed a golden opportunity at the beginning of the Syrian uprising and they shied away from helping people until al Qaeda, or al Nusra, and ISIS hijacked that uprising and converted it to a military confrontation with the [Assad] regime.

Q: You mentioned Iran. What do you believe will be the implications of the Iran nuclear deal for Iraq?

Rubaie: I think this nuclear deal has created a positive political environment in the region in general and in Iraq in particular. We benefit grossly from any coordination between the US and Iran and Iraq in the region. Iraq is the fault line between the Arabs and Kurds, Arabs and Persians, Arabs and Turks, Sunnis and Shias, Muslims and Christians. Any US-Iran confrontation or escalation will translate into blood in my country.

Q: What is it going to take to defeat ISIS?

Q: In which case, is the onus on Muslim states to address this challenge?

Rubaie: The onus is on the Saudi royal family to deprive the Wahhabi religious establishment in Saudi Arabia of money, power, and status.

Q: The Saudis have set up an anti-terrorism alliance. Was it a mistake not to include Iraq, Iran, and Syria in this coalition?

Rubaie: This is not an anti-terrorism alliance. It is an anti-Iran alliance. If they are serious about it they should do soft power. They should address money movement, individual movement, the media, social media, and most importantly the ideology. The largest manufacturing plant of jihadists in the world are the backstreets of Saudi Arabia.

Rubaie: I think [the United States] should concentrate and focus on the ideological challenge and apply pressure on the Saudi royal family to stop the oxygen, which is the dollar.

The Saudi royal family should stop funding the Saudi religious establishment and stop them from spreading this virulent virus around the world. They have spent billions and billions and billions of dollars over the last twenty or thirty years to spread it. Now they have to spend a similar amount or even more to rectify it.

Q: How is the US-led coalition, including the Iraqi security forces, faring in its mission to degrade ISIS in Iraq?

Q: Yet Iraqi Prime Minister Haider al-Abadi has been reluctant to accept US help in the form of troops.

Q: So what help can the United States provide without it creating a political problem for the Prime Minister?

Q: Does the US-led coalition need to step up its targeting of ISIS’ oil supplies in Iraq?

Rubaie: For more than a year we have been talking with the administration to target the fuel tankers. ISIS manages to generate hundreds of millions of dollars from selling Iraqi and Syrian oil in the black market in Turkey. That has to stop. We have been trying to get the United States to do this and fortunately they have started to do it in the last three or four weeks.

Q: Is the Turkish government complicit in ISIS’ oil trade on the black-market?

Q: Do you believe Turkey is undermining the US-led coalition’s effort to degrade and ultimately destroy ISIS?

Rubaie: Turkey has to make up its mind to come fairly, squarely, and irrevocably on this side of the fight. They cannot go half-hearted and sit on the fence. They cannot help terrorism on one hand and fight terrorism on another hand.

Q: Are the tensions between Baghdad and Ankara over the presence of Turkish troops in Iraq distracting from the mission of the anti-ISIS coalition?

Nobody has invited the Turkish troops. If they say the KRG [Kurdish Regional Government] has, the KRG has no right to invite foreign troops to Iraq because KRG still is part of Iraq.

Q: Former British Prime Minister Tony Blair recently admitted that the invasion of Iraq and toppling of Saddam Hussein was in part responsible for the rise of ISIS. Do you agree?

Rubaie: I don’t agree with that because this is an over simplification. Daesh’s resurgence in Iraq was first in 2003—the Ba’ath Socialist Party’s armed rebellion—then al Qaeda in Iraq, and then ISIS.

This is a security manifestation of Wahhabism all over the world. Before 2003, al Qaeda was in Pakistan, Afghanistan, Yemen, and even Somalia. What does that have to do with Saddam Hussein, or for that matter lately they are blaming it on [former Iraqi Prime Minister Nouri] Maliki.

They are avoiding addressing the real issue—the ideology. If Tony Blair is the chief advisor of the Emir of Kuwait, who is a very close friend of the Saudi royal family, of course he will say that, wouldn’t he? He would not address the real issue. As soon as he looks at the Wahhabism and ideological challenge he will remember the twelve million barrels (of oil) a day, and he will also remember his paycheck at the end of the month.