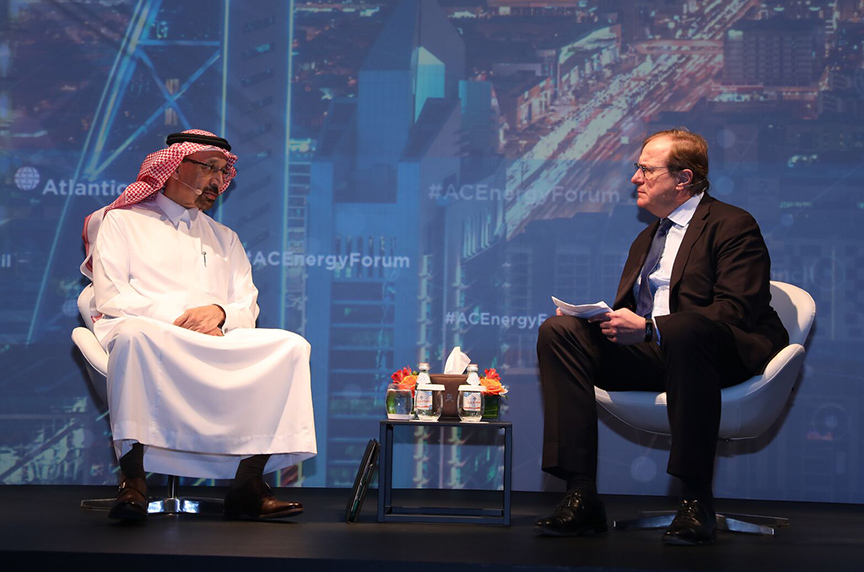 On January 13, Saudi Arabia’s Minister of Energy, Industry, and Mineral Resources Khalid Al-Falih sought to assuage market concerns about potential oil demand as producers try to reverse massive dips in price at the end of 2018.

“Market sentiment today is being shaped by undue concerns about demand, underestimation of the impact of agreed supply cuts, and a misreading of the supply-demand trends which causes counterfactual actions by financial players,” Al-Falih said. “In other words, if we look beyond the noise of weekly data and vibrations in the market, and the speculators’ herd-like behavior, I remain convinced that we are on the right track and that the oil market will quickly return to balance.”

Al-Falih addressed the Atlantic Council’s 2019 Global Energy Forum in Abu Dhabi and later participated in a conversation with Atlantic Council President and CEO Frederick Kempe. The minister’s remarks and the subsequent discussion focused on Saudi Arabia’s Vision 2030 project and Riyadh’s position on the volatile oil market, which Kempe described as “experiencing some of the most profound changes since the founding of OPEC in the 1970s.”

As recently as early October, oil prices were as high as $85 per barrel before concerns about tepid demand, the re-imposition of US sanctions on Iran, and the impact of deteriorating trade relations between the United States and China contributed to prices almost halving by late December.

The fall in prices led the Organization of the Petroleum Exporting Countries (OPEC) to announce a cut in oil production of 1.2 million barrels per day on December 7. Al-Falih pointed out that the OPEC cuts have only just taken effect since January 1, and that production amongst OPEC nations in December “was already more than 600,000 barrels per day lower than November, the bulk of which is due to our preemptive actions.”

In addition to OPEC’s actions, Saudi Arabia “went beyond our commitment and have lowered both production and exports over the last couple of months,” Al-Falih reported.

“I am concerned about recent volatility and prevailing negative sentiment, but the present fundamentals are clearly trending in the right direction,” Al-Falih said. The recent rebound in prices since the end of December is already “starting to reflect already, two weeks into the new year, the impact of our decisions in the fourth quarter,” according to Al-Falih. Concerns from markets that OPEC producers would not be willing to actually hold to their production cut promises are unfounded, Al-Falih argued, because of OPEC’s track record in delivering its commitment to cut a total of 1.8 million barrels per day in 2017.  To Al-Falih, the “skepticism of the market. . . is unjustified given the fact that we have delivered once the same group of countries when needed.”

Al-Falih also assured that “if we find that more needs to be done” to prop up prices “we will do so in unison with our OPEC and [non]-OPEC partners where collaboration has been proven to work.”

Al-Falih dismissed the notion that the growth of shale oil was having a negative impact on the global oil market, as he believes “it will not sustainably depress the market.” While shale has been booming over the last few years, Al-Falih does not believe it can “meet the combined requirements of demand growth and the natural decline of oil fields around the world.” Shale can, however, help “moderate volatility,” due to its flexibility and ability to respond quickly to market conditions and prices,” the minister said. On the flip side, Al-Falih argued, “shale is highly dependent on stability and balance in the market. Healthy shale growth and a weak oil market are a contradiction in terms.”

Al-Falih highlighted the success of the Fiscal Balance Program, which has been able to increase Saudi Arabia’s non-oil revenue by almost 12 percent, reduce the budget deficit, and is expected to grow the country’s mortgage market by 70 percent in the next two years. Al-Falih reported that there has been a 130 percent increase in the number of women in private sector jobs in the last four years, taking their share of the private sector workforce to 30 percent. “Almost in every enterprise today,” Al-Falih said, “both government and private, Saudi women are getting opportunities to work. Four or five years ago that was truly unthinkable.”

In mining and minerals, Riyadh will be focused on increasing its production of phosphate, aluminum, gold and copper. Al-Falih said Saudi Arabia hopes to generate more than 250,000 news jobs in mining by 2030.

Vision 2030 “is steadily and clearly moving from the planning to the implementation phase,” according to Al-Falih, “and the investment opportunities being unleashed are enormously attractive across virtually all sectors and services.”