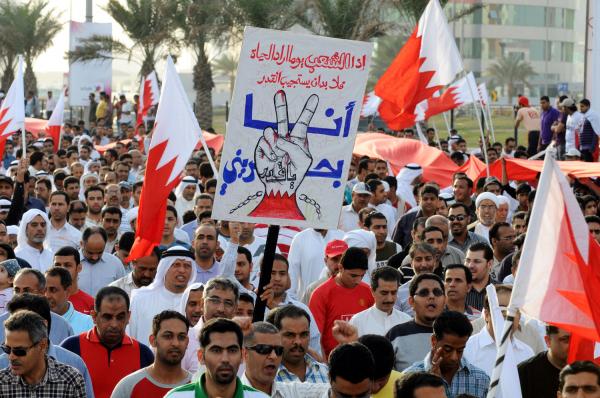 Overlooked in the welter of fast moving events throughout the Arab world was a Saudi Arabian call for transforming the six-nation Gulf Cooperation Council into "an entity identical to the (27-nation) European Union" — plus nuclear weapons.

Saudi Arabia has grown impatient "Waiting for Godot." Samuel Beckett’s famous play depicts the "meaninglessness of life," with its repetitive plot, where nothing much happens. In Saudi eyes, that’s Iran and its secret nuclear weapons program. And eye-drop Western sanctions have done zip to deter Iran’s aging theocrats.

Iran began nuclear research with French assistance in the 1960s. In 1972, Shah Mohammad Reza Pahlavi told this reporter that Iran would one day be a nuclear power. Britain had relinquished all its geopolitical responsibilities east of Suez in 1968.

Under the Nixon Doctrine that followed the British withdrawal from the Persian Gulf, the Shahanshah ("King of Kings") became the "Guardian" (and gendarme) from the Strait of Hormuz to Kuwait.

The religious fanatics who succeeded the shah have similar ambitions — this time to spread their brand of religious extremism. A prime target is Bahrain, a tiny island linked to Saudi Arabia by a 16-mile causeway, which is also home port for the U.S. 5th Fleet, and where 70 percent of the population of 1.2 million are Shiite Muslims (as in Iran).

Saudi Arabia, answering an appeal from the Bahraini monarch, dispatched some 1,500 troops and armored vehicles across the causeway to guard vital installations while local law enforcement coped with daily demonstrations and riots.

When the Arab volcano began erupting Jan. 18 in Tunisia and spread political lava through Libya, Egypt, Syria, Jordan, Bahrain and Oman, the powers that be in the West fell silent, evidently prepared to ditch erstwhile friends and allies. The lesson wasn’t lost on the Saudis.

It wasn’t until Libya’s megalomaniacal Col. Muammar Gadhafi announced he was planning to kill without mercy his own dissident citizens in Benghazi that U.S. President Barack Obama perked up and Secretary of State Hillary Clinton talked retaliation with the European allies. The Germans balked. Then U.S., French and British fighter bombers decimated Gadhafi’s tanks headed for Benghazi. But Obama, already saddled with two military theaters, and anxious to avoid a third, kicked Libya operations over to NATO and the Europeans.

In his first attempt to unveil what was quickly dubbed "Obama Doctrine," the president, in effect, bought Gadhafi more time by declaring regime change by force would be a mistake. Bush 41 took the same decision in 1991 by declining to chase Saddam Hussein’s legions back to Baghdad. This, in turn, led to a 12-year, $14 billion no-fly zone over Iraq, followed by Gulf War II in 2003. The Saudis paid the tab, as they did for most of the war.

This time, the Saudis, armed with compensatory cash, managed to dodge popular wrath oozing through the Arab body politic. The only noticeable demonstration was a small one (about 1,000) in favor of the divine right of kings (enunciated by the Stuarts in Britain in the 16th century).

But Saudi soldiers in Bahrain, now backed by police from the United Arab Emirates (a federated union of seven sheikdoms, including Abu Dhabi and Dubai), face indefinite security duty in another country. Some 70 percent of Bahrain’s work force is on strike and clashes with police are now routine.

Former U.S. Ambassador to Saudi Arabia Chas W. Freeman Jr. says, "the one plausible source of contagion for Saudi Arabia is the civil strife in its much smaller sister kingdom of Bahrain … where the ouster of its royal family … could incite instability in the other small city-states" that make up the Gulf Cooperation Council with Saudi Arabia. And they all fear that majority Shiite rule in Bahrain would draw the island into the Iranian orbit, handing Iran a strategic base of influence in their midst.

Prince Turki al-Faisal, the man who headed the Saudi intelligence service for a quarter of a century before his appointment as ambassador to Britain and later the United States, reminded Western countries that GCC’s mutual defense pact is similar to NATO’s in its obligations.

Now chairman of the King Faisal Research Center, Prince Turki launched the drive for the GCC countries to acquire nuclear weapons, now described as essential vis-a-vis the two other regional powers that already posses them. He named Iran and Israel.

Prince Turki, in a little reported talk but clearly speaking for the kingdom at the annual conference of the Emirates Center for Strategic Studies, called for a joint Persian Gulf army "acquiring the nuclear might to face that of Iran."

While international efforts have clearly failed to coerce Tehran from developing nuclear weapons, and Israel from dismantling its own arsenal, a nuclear future for GCC is an imperative.

Between them — Saudi Arabia, Kuwait, Qatar, the United Arab Emirates, Bahrain and Oman — there is no shortage of cash in the "Sovereign Wealth Funds" to fund a nuclear weapons program. They can pay top dollar for nuclear scientists and engineers from Western powers and Russia.

"We ought to be effective regarding major international affairs and prevent others from dictating options to us," said Prince Turki, scion of the late King Feisal, the monarch who created the modern Saudi state.

Qatar, the wealthiest gulf state with a per capita income of $78,000, was the first non-NATO country to respond to the no-fly zone over Libya appeal from the 22-member Arab League. One-third of its French-made Mirage squadron flew to a Greek base in Crete where they joined a French squadron and flew four-plane joint patrols over northeastern Libya.

The United Arab Emirates followed the Qatari lead with 12 F-16s.

Qatar also has a global reach through al-Jazeera TV news, in both Arabic and English. Lavishly funded, the network has more bureaus and correspondents than any other TV news operation anywhere in the world.

The next act in the Persian Gulf sweepstakes won’t be a walk in the park.