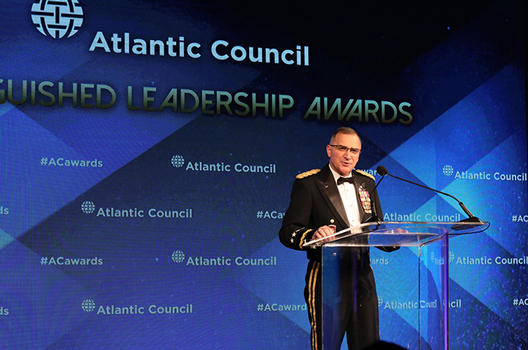 The United States and NATO must take steps to preserve the unity of the transatlantic alliance in the face of a “complex and dynamic security environment,” said Gen. Curtis M. Scaparrotti, supreme allied commander Europe and commander, US European Command.

Noting skepticism about the strength of the rules-based international order, Scaparrotti said: “This is why now, more than ever, we must articulate our principles with clarity, consistency, and conviction. We must communicate our narrative of freedom, democracy, and rule of law. We must affirm the importance of our alliances and partnerships, which remain the backbone of our global security.”

In his acceptance speech, Scaparrotti said it was vital for the transatlantic alliance to “maintain our resolve, to obtain the defense posture we need, to continue to adapt, to preserve the unity of the alliance, and to strengthen the international order we’ve created.”

“I’m confident that we’ll do so, supported by the significant work of the Atlantic Council,” he added.

Earlier in the evening, Atlantic Council President and Chief Executive Officer Frederick Kempe said that the gathering was taking place “at a time of global uncertainty, when truths and assumptions we thought to be iron-clad are now thrown into question.”

“From the renewed threat of major power conflict to uncertainty around America’s role in the world, from the fraying of Western-style democracy to the erosion of the global order, to the opportunities and challenges inherent in a coming era of technological change unlike any we have faced before, the world is facing intersecting global risks that have created the most unsettled global situation since the end of World War II,” said Kempe.

“At the Atlantic Council, however, we don’t see any of these challenges as reason for despair. We see them as a call to action,” he added. “We operate under the guiding principle: it is not and cannot be business as usual.”

Scaparrotti described the US mission in Europe as “important as ever.”

“As our National Defense Strategy states, a strong and free Europe, bound by shared principles of democracy, national sovereignty and a commitment to Article 5 of the North Atlantic Treaty, is vital to our security,” he said.

Scaparrotti noted that democratic values are “once again under assault, both by nation-states who benefit from destabilization and by nonstate actors who thrive in disorder.”

“They value power over principle. And in their pursuit of power, they seek to sow discord, confusion and doubt within the nations of the Euro-Atlantic,” he said of these nation-states and nonstate actors.

To those who doubt the resilience of the alliance, Scaparrotti said: “The US, our allies and our partners have met every test with unity and resolve.”

Scaparrotti was introduced by Gen. Joseph F. Dunford, Jr., chairman of the Joint Chiefs of Staff.

Dunford said that as a resurgent Russia seeks to undermine the credibility of the alliance, and as the alliance faces the challenge of extremism from the south, Scaparrotti has led the transformation of NATO’s military capabilities to be, in NATO terms, “fit for purpose for the 21st century.”

Scaparrotti accepted the award on behalf of the men and women of NATO and the United States European Command.

These servicemen and women are conducting operations, missions, and training exercises in the Arctic, in the High North, in Afghanistan, along the Eastern Alliance border, in multinational battle groups from Estonia to Romania, and naval task forces in the North Atlantic, the Baltic and Black Seas, and in the Mediterranean. “And they’re over the skies of Europe, providing air surveillance,” said Scaparrotti.

“These men and women of NATO are demonstrating the alliance’s resolve and its ability to change and to remain relevant in a complex environment,” he added. “They deter Russia, defend Israel, counter transnational threats, and enable operations around the world.”

Image: The US mission in Europe is “important as ever," said General Curtis M. Scaparroti at the Atlantic Council's Distinguished Leadership Awards on May 10, 2018. (ImageLink)