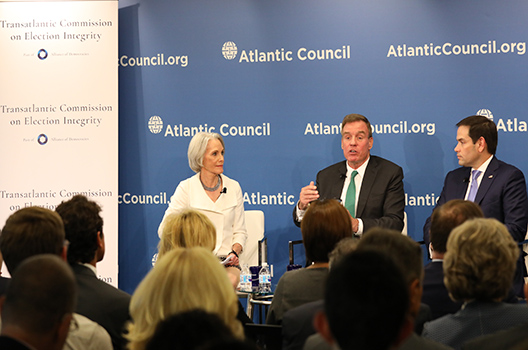 The two senators, who spoke at an Atlantic Council event on the Kremlin’s interference in elections worldwide, directly criticized Trump’s remarks and reiterated their belief that Russia actively influenced the US elections in 2016.

In a July 16 press conference following his meeting with Putin in Helsinki, Trump refrained from directly criticizing Russia for interfering in the 2016 elections. When asked by a reporter if he believes the reports of the US intelligence community that Russia had taken active measures to disrupt the 2016 elections, Trump responded that he didn’t “see any reason why” Russia would be to blame and that Putin “was very powerful” in his denial of involvement.

“The president of the United States basically sided with the Russian interpretation [of the interference question]. That is stunning,” said Warner. He added that with these remarks, “the president of the United States sided with Vladimir Putin over the unanimous assessment of the American intelligence community, over the bipartisan conclusion of the Senate intelligence committee, [and] over the acknowledgement of Facebook, Twitter, YouTube, and the social media platforms that Russia manipulated” the outcome of the election.

Rubio added that he “never had any doubt” that Russia actively intervened in the 2016 election, noting that “the intelligence community has assembled probably an unparalleled amount of evidence in regards to the Russian [ongoing] efforts to interfere in American society.”

Warner was clear that “we know that Russia hacked into both political parties and then released selective information on one party—the Democrats—to try to help Trump and hurt [Democratic presidential candidate Hillary] Clinton. We know that Russia and Russian agents scanned or penetrated over twenty states’ electoral systems. And we know that Russia and their agents manipulated social media in ways that literally hundreds of millions of Americans were in contact with mostly fake information.”

Warner rebutted Trump’s claim that both sides were to blame for declining US-Russian relations, arguing during a pre-event press conference that the situation is not due to “something that any American policymaker has done, but because Russia, under the leadership of Vladimir Putin, massively intervened in our elections in 2016.”

Trump was confident that his meeting with Putin—the two presidents’ first summit—was a success, saying US-Russia relations have “never been worse than it is now, however that changed as of about four hours ago.”

Rubio said he understood the president’s desire to have a working relationship with Russia, but argued that “Vladimir Putin is not interested in a better working relationship with the United States because he views the world—geopolitics—as a battle between the strong and the weak…He believes that the only way to make Russia stronger is to make America weaker and these elections interference efforts are a part of it.”

Rubio argued that Russia’s goal was not to tip the election to Trump, but rather “to sow permanent instability in American society and political culture, so that we are so busy fighting each other that we don’t have time to take him on as a threat.”

Both senators stressed the importance of looking beyond the 2016 elections to prepare for future attempts at interference, which Rubio promised “will happen again.” Director of National Intelligence Dan Coats told a meeting co-hosted by the Atlantic Council in Normandy, France, on June 8 that Russia was attempting to influence the US midterm elections in November.

Rubio brought up his proposed DETER Act, which would give the Director of National Intelligence the ability to trigger sanctions prior to congressional approval, when intelligence agencies have uncovered evidence of election interference by a foreign state. Warner also highlighted bipartisan legislation on information-sharing, new federal funds to help states upgrade their election systems, and the need for a new “cyber doctrine” to outline the exact course the United States should take when attacked in this way.

These measures can help, but both senators stressed the need to address the “societal responsibility,” in Rubio’s words. “Increasingly more and more Americans are getting the news and information from sources that tell you that you are right,” Rubio said and he stressed the need for Americans to understand that “just because it is on the Internet does not mean that it is true.”

Warner added that “we need to acknowledge that there are things which are actual facts,” and maintained that the United States can learn valuable lessons from other allied countries who have experienced similar attacks.

This drive to learn more from other partners is what inspired the Atlantic Council’s July 16 event, “Pulling the Strings: Kremlin’s Interference in Elections.” In addition to featuring Warner and Rubio, the Atlantic Council hosted roundtable discussions with members of parliament from eight countries and the European Parliament. Participants shared their experiences and recommendations for preventing election interference. Atlantic Council President and Chief Executive Officer Frederick Kempe underscored the need for this discussion now, as “in this year alone, elections will occur in Georgia, Latvia, Sweden, Moldova, and Brazil,” along with the US midterm elections. The event was co-hosted by the Transatlantic Commission on Election integrity, a new commission aimed at preventing election interference in Europe and the United States.

Video from the full event can be found here