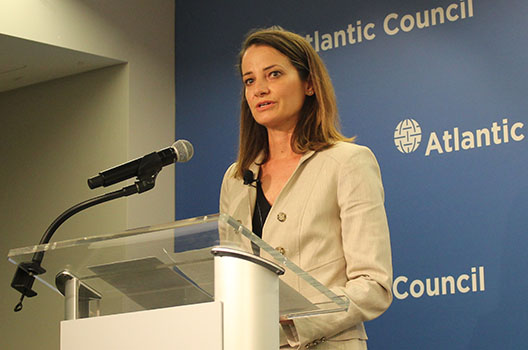 Russia’s support for Bashar al-Assad’s regime in Syria is just the beginning of Moscow’s designs on the wider Middle East, Kathryn Wheelbarger, acting US assistant secretary of defense for international security affairs, warned on May 30.

“Syria is a prime example of Moscow’s efforts to influence world events for its own advantage and prestige in a manner that contributes nothing but additional instability to the region and beyond,” Wheelbarger said in remarks at the Atlantic Council in Washington. In addition to rebuffing US efforts to support the political opposition to Assad, Russia’s actions in Syria provided Moscow an “opportunity to reestablish its great power status in the region, assert its pragmatic brand of security cooperation and assistance, demonstrate and improve its military capabilities, and expand its access to hold NATO’s southern flank at risk,” she explained.

“Russia’s low-cost intervention in Syria has not only allowed it to buttress the Assad regime, but also to secure valuable basing locations and increase its convening leverage over regional partners,” she added. Russian military forces have developed existing military infrastructure—such as the Tartus naval facility and Shayrat military airbase—as well as built new facilities such as the Khmeimin airbase, throughout Moscow’s involvement in the war-torn country.

George Mason University professor Mark N. Katz specifically highlighted Russia’s attempts to improve relations with the United States’ traditional allies in the region. These partners “all have good relations with Russia. [The United States’] allies elsewhere are far more concerned with Russian policy in their neighborhood, but not so much in the Middle East,” he explained. Katz’s issue brief for the Atlantic Council, “When the Friend of My Friends is Not My Friend,” details Moscow’s attempts to woo Washington’s longtime partners, despite warming ties between Moscow and regional power Iran.

Wheelbarger urged Middle East partners “to see that Russia remains an unreliable partner. By striving to accommodate all sides in regional disputes, Russia shows that it cannot be trusted when real choices need to be made and friends need to be known.” She specifically argued that Moscow’s attempt to court Tehran should show that it cannot be trusted. Both Iran and Russia “have revisionist ambitions for the region and will continue to impact the security and stability of our partners,” she said, adding that “the United States and the region must be mindful when revisionist powers cooperate.”

Wheelbarger also warned US allies against purchasing military equipment from Moscow, which Gulf partners have increasingly done in recent years. Russia’s “military sales do not come with long-term commitments of maintenance, sustainment, and interoperability that the United States routinely provides. Russia is a transactional partner seeking its own benefit. It thrives in chaos and therefore does not seek the best interest of its transactional partners,” Wheelbarger argued.

The arms sales also could have negative impacts for cooperation with the United States, according to RAND Corporation policy analyst Becca Wasser. “The introduction of Russian equipment into these countries’ arsenals… really complicates US efforts towards interoperability, it also poses an intelligence collection risk,” she explained. Should US partners increase their use of Russian weapons systems, “it actually could be used to erode the US technological edge.” Wasser added that many of these countries are buying Russian equipment not because they need it, but rather to “voice some displeasure at a US policy measure or trying to find some type of leverage to try to shape the outcome of a policy decision.”

Wheelbarger specifically called out the potential sale of Russia’s S-400 missile defense to NATO ally Turkey. “Completion of this transaction would be devastating,” Wheelbarger warned, adding that the integration of Russian defense systems “undermines our ability to help [allies] defend themselves.” Washington is already responding with the threat of sanctions against countries buying from Moscow, she cautioned, as they “provide a very clear message and effect that the United States cannot accept Russia’s encroachment and opportunism into our key defense relationships and we will continue using those sanctions if necessary.”

For Wheelbarger, Russia’s exploitation of the Syrian conflict should be lesson enough for those who are contemplating growing closer to the Kremlin. “Any regime that thrives on chaos,” she argued, “cannot be trusted to strive for stability.”

Image: Acting US Assistant Secretary of Defense for International Security Affairs Kathryn Wheelbarger speaks at the Atlantic Council on May 30, 2019.