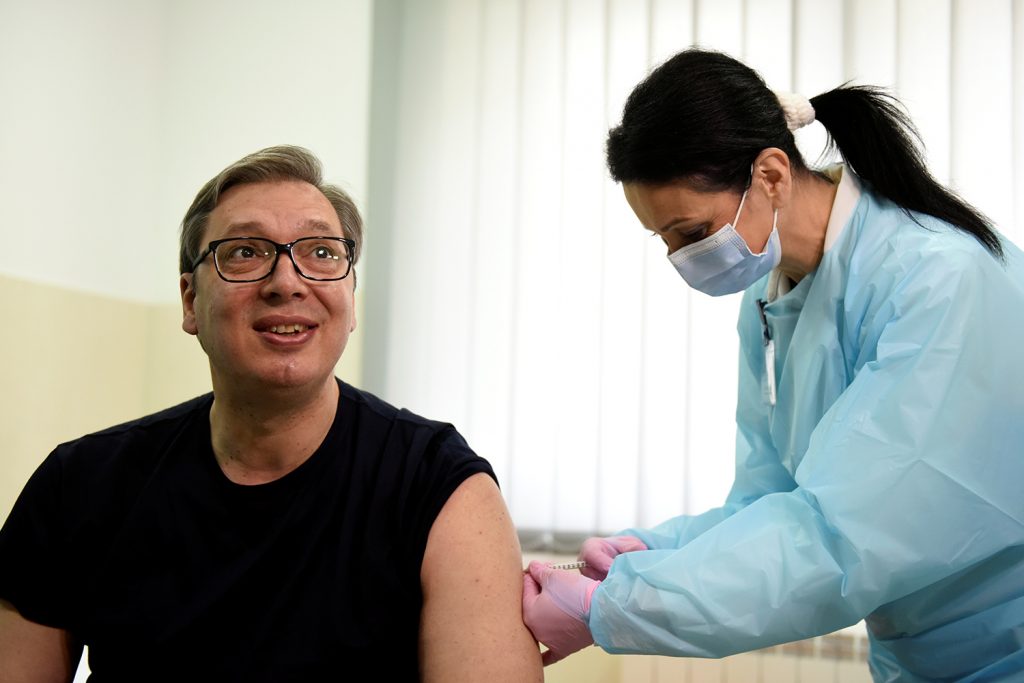 “We are ready to listen to all the critics,” says Serbian President Aleksandar Vučić regarding criticism of the state of democracy in his country amid its bid to join the European Union (EU), “and to implement everything that we have already agreed with the European Union on this.”

Vučić made his comments during an Atlantic Council Front Page event hosted by the organization’s Europe Center and co-moderated by Maja Piscevic, a nonresident senior fellow with the center, and Damon Wilson, executive vice president of the Council.

On Serbia’s recent delivery of more than 120,000 vaccine doses to neighboring Montenegro, North Macedonia, and Bosnia and Herzegovina, Vučić said he is “very proud [of] being part of a team that did something. I don’t believe that we did something huge or we did something historic, but we just did our job. We invested hard work and we got more vaccines than the others.”

Vučić said Serbia negotiated shipments from Pfizer and AstraZeneca as well as vaccines from China and Russia, and that by late October it will begin receiving doses from Moderna. Yet he denied allegations that Serbia acted as a testing grounds for stage-three trials of China’s Sinovac or Russia’s Sputnik jabs. “We were not a part of that process,” he said. “We just bought and we got more vaccines that finished all their trials in their own countries.”

Serbia’s vaccine diplomacy comes as the country begins its post-COVID recovery. (The country has fully vaccinated more than 17 percent of its population against COVID-19.) The International Monetary Fund predicts Serbia’s economy will expand by 5 percent this year, though Vučić expects gross domestic product (GDP) growth to reach 6.5 percent in 2021. In addition, Serbia received close to 70 percent of all foreign direct investment (FDI) destined for the Western Balkans last year. Vučić credited Serbia’s strong performance to the passage of labor and bankruptcy reforms in 2014 and 2015, as well as subsidies and tax incentives to encourage foreign investment.

Vučić has placed a high priority on Serbia’s ties with the United States—a relationship likely to grow even closer under US President Joe Biden. “We’ll do our best to boost the friendship between the two countries,” Vučić said, later adding that “there are, of course, differences, particularly on [the] Kosovo issue. But we are ready to discuss this,” he said, noting Biden’s readiness to listen to Serbia’s position on a range of matters.

“I hope that we can have a serious, responsible approach in developing our relationship. And I think that [the] US interest in the Western Balkans is having Serbia as an ally…” Vučić said. “But of course, ten times more than America’s interest [in] having Serbia as a friend is our interest [in] having America—if I cannot say the best friend in the world, I can say the friend with which we share a common interest and a common future.”

What’s next for Serbia’s EU-membership campaign

Meanwhile, Serbia’s efforts to join the EU have stalled amid concerns raised by the union—also echoed by the US State Department and watchdog groups like Freedom House—about corruption, attacks on journalists, and the general state of democracy in the country.

“I am very much aware that we are not perfect and I’m not hiding this,” Vučić said, outlining Serbia’s efforts to combat corruption, organized crime, and the general abuse of democracy.

On a list of items Serbia needs to complete prior to joining the EU, said Vučić, “we’ve started ticking the [boxes]… We do it because it’s useful for us and it’s good for Serbia’s democracy, and it’s good for Serbia’s image,” he said. “And if we are capable enough of delivering the very best results [on the] economy in this region, the very best results in [the] inoculation process in this region, I have no doubt we are ready to improve the state of human rights and democracy in this country as well.”

As Serbia’s economy improves, however, Vučić said that the country will also need to tackle its impact on the environment to win the European Commission’s favor. He explained that Serbia is working on a green agenda. But “I have some fears,” said Vučić, “and I’m not absolutely jubilant about everything that we need to do…  I’m always very sincere speaking about our economy, which is of an utmost importance for us, and it’s not easy to sacrifice something that works for you because of [a] green agenda. We’ll have to do it, but we’ll have to balance it smartly.”

According to Vučić, Serbia and others in the region are pushing for a common market, sometimes called a “mini-Schengen,” that would unite the smaller countries of the Western Balkans. Yet Vučić acknowledged that some people in neighboring countries are suspicious of Belgrade’s motives.

Meanwhile, little progress has been made in resolving the impasse between Serbia and Kosovo since April 2013, when the two sides signed a fifteen-point accord that opens the way to EU membership for both countries. So far, ninety-eight countries including the United States have recognized Kosovo’s sovereignty, the most recent being Israel in September 2020.

“What we signed in Brussels exactly eight years ago has to be fulfilled by both sides,” Vučić said, arguing that “the other side wanted to sign it just because they were absolutely certain that they didn’t need to fulfill everything they signed, but we’ll have to deliver more than they signed.”

The problem, he alleged, is that the United States, Germany, and other powerful countries continue to pressure Serbia to recognize Kosovo’s independence without offering Belgrade anything concrete in return—not even guaranteed full-fledged membership status in the EU.

“We need to change the overall atmosphere. We need to discuss everything in a totally different way,” Vučić said. “We need to boost trust and confidence between us, not to see each other as the real enemies. We are not enemies.”

Yet he conceded that mistrust runs deep on both sides. “We need both peoples—Serbs and Albanians—to accept compromise and solutions… I’m afraid that the atmosphere in Pristina is, dare to say, much worse than in Belgrade,” he said. “And in Belgrade it’s not the very best atmosphere [either].”

“We are not interested in creating any kind of Greater Serbia. To us, Greater Serbia means a better economy, more FDI, more plants—a green agenda but not jeopardizing our economy,” he said, adding that his government seeks to bring down unemployment and raise living standards. “That’s what we are interested in.”

Serbian President Vučić on COVID-19, democracy, and Serbia’s bid to join the EU

Serbia is at an inflection point as it deals with a global pandemic and as it navigates its place in Europe and the Euro-Atlantic community in the future. Serbian President Aleksandar Vučić joined the Atlantic Council to discuss how Serbia fits into a Europe that is whole, free, and at peace.

Western Balkans Partnership: Getting a common market from the Sofia Summit

In Sofia on November 10, the Western Balkans Six—Albania, Bosnia and Herzegovina, Kosovo, Montenegro, North Macedonia, and Serbia—the European Union, and ten European countries belonging to the Berlin Process will set an agenda for the next four years. This report discusses what is likely to emerge and what might need to be done later.