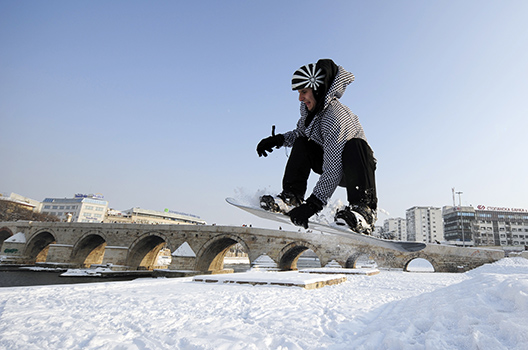 A man jumps with his snowboard on the banks of the river Vardar next to the Old Stone Bridge in Skopje January 5, 2009 after heavy snowfall overnight. (REUTERS/Ognen Teofilovski)

On September 8, the Republic of Macedonia celebrates its Independence Day, marking twenty-seven years since it declared independence from Yugoslavia. On September 30, citizens will vote in a referendum to ratify a name-deal with Greece, that will see the country renamed to “the Republic of North Macedonia,” hopefully ending a decades-long disagreement with Greece and paving the way for Macedonia’s accession to the European Union and NATO.

But Macedonia is about more than NATO expansion or naming disputes. Here’s a look at this small Balkan country that is now grabbing headlines.

1. It’s old. Macedonia’s capital, Skopje, bears constant reminders of the empires that have come and gone. The large stone bridge which spans the Vardar River is said to have been built on foundations left by Roman settlers in the 1st Century C.E. The bridge leads Macedonians to the Old Bazaar, which is filled with architecture from the Byzantine and Ottoman periods. The imposing Fortress of Kale (not the vegetable, the Turkish word for “castle”), built in the 6th Century supposedly by the Byzantines before Skopje became the capital of the Serbian Empire in the 14th Century, sits perched atop the highest point in the city.

2. But it’s wireless. In 2006, Macedonia became the world’s first country to have full wireless broadband access. This achievement was thanks in part to a program sponsored by the United States Agency for International Development (USAID). Under the program, more than 5,000 computers were installed in secondary and primary schools and technology training was provided to more than 6,000 teachers. The program has helped transform Macedonia from one of the toughest places to access the Internet to a world leader in access.

3. It’s got a beach, but no ocean. Despite being land-locked, Macedonians can spend time near the water by visiting Lake Ohrid in the southwest of the country. Astride the water is a city of the same name, whose founding goes all the way back to the 4th Century B.C.E. The city is now a UNESCO heritage site, complete with hillside amphitheaters, 700-year-old basilicas and churches, and cobbled streets. The coastline around Ohrid is similarly dotted with monasteries, tiny fishing villages, and miles of hiking trails leading up to tree-covered mountains. The biggest attraction is the shoreline, which offers many Macedonians the rare chance to enjoy a beach day in their mostly-mountainous country.

4. It’s fishy. Lake Ohrid, which straddles the border of Macedonia and neighboring Albania, is one of the oldest lakes in the world. Researchers estimate it was formed more than five million years ago. The lake is considered to be one of the world’s most bio-diverse, with hundreds of individual species only found in its waters. The most notable visitor to the lake is the European eel, which remarkably makes a thousand-kilometer journey from the Sargasso Sea to Lake Ohrid after it is born before returning to its birthplace ten years later.

5. It’s saintly. Mother Teresa of Kolkata was born in Skopje on August 26, 1910, living there for the first eighteen years of her life. A Roman Catholic nun, she formed the Missionaries of Charity organizations, which aims to help the poor, sick, and orphaned around the world. Mother Teresa would become famous for her work with the poor and terminally ill in India. She was canonized as a saint in the Roman Catholic Church in 2016. In 2009, Skopje opened the “Memorial House to Mother Teresa” to honor her memory. The memorial is built on the site of the Catholic Church where Mother Teresa was baptized as a child.

6. It’s peaceful. In stark contrast to the other countries of the former Yugoslavia, Macedonia obtained independence peacefully in 1991. On September 8, 1991, Macedonians voted in favor of independence in a referendum in which 1.3 million citizens (75 percent of those eligible) voted. Federal Republic of Yugoslavia recognition of Macedonia’s independence would come a year later, with UN membership achieved by 1993. Despite the brutal conflicts waging in other parts of the Balkans, Macedonia was able to transition to independence without violent conflict.

7. It’s voting again. Although independent for almost three decades, Macedonia still has one tough regional issue to solve: its name. Greece has long opposed the name “Republic of Macedonia,” as Greece’s northern region is referred to by the same name and this designation could call Greece’s control over the region into question. On June 12, Greek Prime Minister Alexis Tsipras and Macedonian Prime Minister Zoran Zaev reached an agreement to rename the country “the Republic of North Macedonia.” The agreement was followed by the announcement by NATO’s leaders that they would invite Macedonia to join the Alliance if its name was changed. Macedonian voters will go to the polls on September 30, much like they did in 1991, to take part in a referendum to ratify or reject the name deal with Greece.