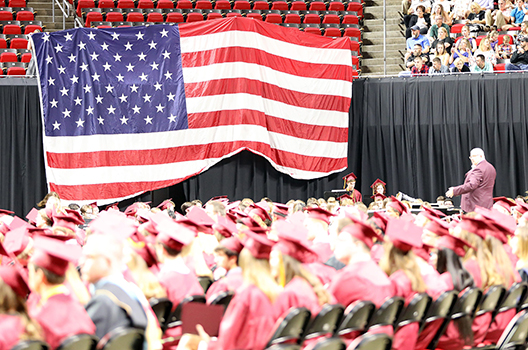 An American flag is unrolled during the Ankeny High School graduation ceremony for the Class of 2019 at the Hilton Coliseum on the Iowa State campus in Ames on Saturday, May 25, 2019. (USA TODAY via REUTERS)

Progress is not inevitable.

For seven decades, the United States has led the international order built on the foundation of democratic values, human dignity, and open markets, which has brought better lives for our citizens and billions of people around the world.

After a pretty good historic run, it was easy to take it for granted. But the world as we know it is at risk. The next generation must forge a new American leadership in a dramatically uncertain world.

I graduated high school as the Berlin Wall came down. I didn’t understand it at the time, but I was beginning my own career at the height of American power. I was intoxicated with a sense of opportunity, of possibility.

While at college, I lived in Estonia for a summer during its first year of independence and watched Estonians—not much older than I was—re-establish their nation which had been extinguished fifty years before. My last night in Tallinn, I took one of my hosts out to dinner and he told me that was the first time in his life he had ever eaten in a restaurant.

American ideas had triumphed, and US leadership inspired so many in the world. The number of democracies had exploded from twenty-nine when I was born to seventy-seven when I was in college—for the first time in history, representing a majority of the world.

But quickly, a dark side emerged. Saddam Hussein’s Iraq occupied Kuwait, nationalist leaders slaughtered 100,000 in Bosnia, and the Rwandan genocide killed as many as 900,000 people in three months.

The United States was ascendant, but the world was messy. I wanted to understand this dark side, because I wanted to stop it. I could think that way in the 1900s as the United States, after all, was the only superpower and essentially emerged as the guarantor of global order.

I interned for a summer with the Unaccompanied Children in Exile project and then moved to Rwanda with Save the Children—the only time I directly defied my mother. These experiences showed me how the United States could be a force for good in the world by championing the norms and values so critical to preventing such atrocities. But we also had the ability, and occasionally the will, to back up those principles by bringing to bear our diplomatic, economic, and military power.

We had delayed in Bosnia and turned a blind eye in Rwanda. I wanted to help change that. I went to work in Washington, first at the National Security Council, then at the State Department, before serving in Beijing and at NATO headquarters in Brussels.

And then four planes struck the United States on September 11, 2001, and everything changed.

I was at NATO headquarters, watching live as the second plane hit the South Tower of the World Trade Center in New York. Our feeling of helplessness was soon replaced by resolve, as our allies rallied to invoke Article 5 of the Washington Treaty that says an attack on one ally will be considered an attack on all. It was the first and only time it was invoked. It felt good to have so many friends.

But the wars in Iraq and Afghanistan dragged on. Russia turned authoritarian and invaded Georgia and later Ukraine. A booming China began to provide an alternative. Over the past decade, one in six democracies has failed. The 2008 financial crisis triggered a global recession and our politics seemed to produce nothing but partisan gridlock rather than big ideas.

As a result, other nations started to question Washington’s leadership and the American people began to question our nation’s global role.

I experienced those limits. As a chief of staff at the US Embassy in Iraq, I will never forget the images of my team racing to “duck and cover” as we came under rocket attack, the pain we felt as one of our translators was kidnapped and killed, and when I escorted a severely wounded soldier on an evacuation, during which he squeezed my hand for the entire flight to Germany telling everyone I was his brother.

For me, it was startling. In the 1990s the United States was seen as akin to the Roman Empire—which ruled for a millennium. Then 9/11, two difficult wars, and a devastating financial crisis brought our nation and the world to another inflection point. This time the outcome is less certain.

I believe shaping a new American leadership is the calling for the next generation.

We confront the return of major power competition and potentially conflict, new doubts about the future of democracy and free markets, the questioning of the global system of rules and institutions, uncertainty about the United States’ global leadership role, and unprecedented technological change.

The United States and our allies have seldom operated in such a dynamic time of political, economic, and societal change. The sense of relative peace and prosperity young Americans experienced growing up is at risk.

What is the answer to all of this? Leadership.

Here is my advice to young Americans:

Don’t just be observers of these trends. Act. Do the hard work—and get a little dirty. Seek out experiences and take risks while you can. Now is the time to invest in yourself so you can be the best prepared to help us navigate the future.

Remember this is about people. I never could have been as effective of a policy maker if I had not comforted the spouses of leaders poisoned for their politics and made friends with people who did not take freedom, peace, or their personal security for granted.

Second, bring your values to your vocation. Of all the trends I mentioned, one is most relevant to your generation: how technology is transforming our lives. The task you face is how to harness technology for good. Don’t be content with letting technology be neutral—and then look up and see that autocrats are using your ideas to control their people, to steal from our companies, to coerce our friends.

Technology offers so many opportunities, but the benefits are not spread evenly. The United States is not immune of course. Prospects for kids graduating from high school in some towns are slim. Those communities are crying out. Help us get ahead of this building backlash.

And, finally, appreciate the power of your generation’s perspective, simply because you are not trapped by the past.

I am a gay man. After college, I was interested in politics and national security, two fields which I feared were not compatible with who I was. When I went to work in Washington for the first time, your sexuality could still be a reason to deny a security clearance. I would’ve given almost anything not to be gay.

For me, having a niece and nephew who only knew me as I am was empowering. From the start, they simply accepted me. Hearing my niece call my husband “Uncle David” without thinking made me appreciate that your generation is already changing things. That is your power. Seeing things differently and in doing so changing the world for the better.

Today, many no longer believe that we pursue our interests as our values advance. We are becoming blatantly self-interested and nationalistic, even as we’ve become more divided.

We also forget how much of our influence comes from inspiring others, which is a source of our strength. It’s why we have allies, and the authoritarians do not. Our friends are our comparative advantage.

Help us retain our ability to inspire. We need leaders who can help our nation navigate a globalized world, ensure that we are competitive, connect our power to purpose, remain true to the principles that distinguish our nation from others, and rally the world to solve the problems no nation can tackle alone.

We are not just another country. If you understand the unique role we play in the world, you understand why you must help us get that role right. Don’t assume an international system fostering peace and prosperity is self-executing. Don’t leave it to chance.

Help forge a new American leadership for a new era. This is your generation’s task.

This is an abridged version of a speech given by Damon Wilson at the Commencement Ceremony for the Menlo School in Atherton, California, on June 5, 2019.