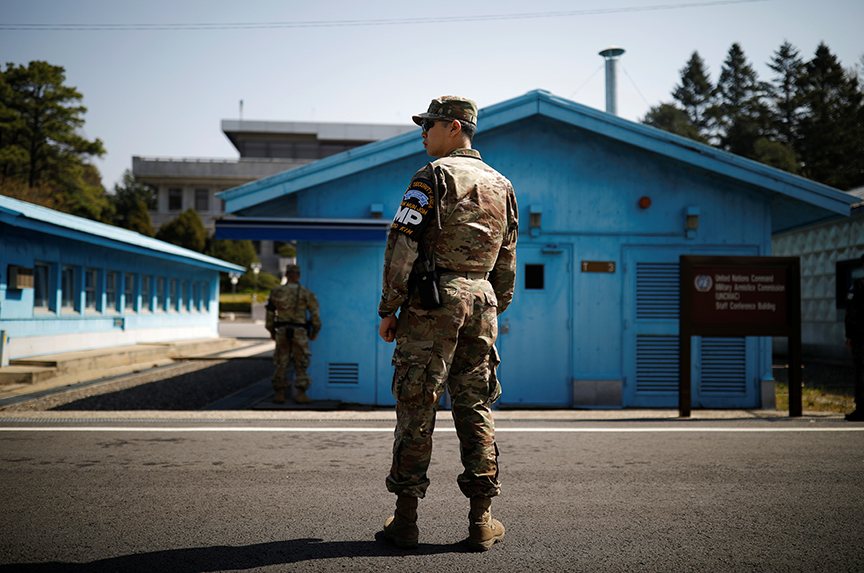 US Army soldiers stand guard at the truce village of Panmunjom inside the demilitarized zone (DMZ) that separates North and South Korea on April 18. (Reuters/Kim Hong-Ji)

Given the frenetic pace of the news cycle these days it would be easy to have missed the fact that the leaders of North and South Korea are poised to make a little bit of history of their own—and, perhaps, bring peace to two countries that have technically been at war with each other for the past sixty-eight years.

We have you covered.

Here’s what you need to know: The leaders of North and South Korea—Kim Jong-un and Moon Jae-in, respectively—will meet for rare face-to-face talks at Panmunjom, the so-called truce village that straddles their countries’ borders, on April 27.

US President Donald J. Trump has given his “blessing” to Moon and Kim to discuss a formal end to the Korean War. An armistice, not a peace treaty, has been in place since the end of the Korean War in 1953.

The Kim-Moon summit is expected to set the stage for Trump’s own summit with Kim in May or early June. That summit will make history of its own as it would be the first time that a sitting US president has met the leader of North Korea.

Here are six things that you should know.

Who is Moon Jae-in?

Moon has been steadfast in his determination to repair inter-Korean relations.

The Atlantic Council awarded Moon its Global Citizen Award in 2017. In his acceptance speech at the awards dinner in New York on September 19, 2017, Moon reaffirmed his desire to “accomplish peace on the Korean Peninsula for the sake of world peace.”

“I am confident that after realizing peace on the Korean Peninsula, there will be a time when we can talk about the history of peace achieved by the Republic of Korea,” he said.

Who is Kim Jong-un?

Kim Jong-un is believed to have been in his late twenties when he assumed the presidency following Kim Jong-il’s death.

Over the past year, Kim Jong-un has conducted provocative missile and nuclear tests. He even threatened to strike the United States.

Trump and Kim have, in the not-so-distant past, engaged in a war of words. The US president derisively referred to Kim as “little Rocket Man,” while the North Korean leader called Trump a “mentally deranged US dotard.” [Merriam Webster defines dotard as “a person in his or her dotage.”]

As Trump and Kim now plan for a summit to discuss possible denuclearization of the Korean Peninsula, the US president says his North Korean counterpart is “very honorable.”

Why is the Moon-Kim summit historic?

Why are the Koreas at war?

The armistice was intended to serve as a ceasefire until a “final peaceful settlement” was reached. A peace treaty was never signed, which means that the two Koreas are technically still at war.

What is the demilitarized zone?

The demilitarized zone, more popularly known as the DMZ, was established as part of the Korean Armistice Agreement. It is a one-hundred-sixty-mile strip of land that cuts across the Korean Peninsula along the thirty-eighth parallel. It serves as a buffer between the two Koreas. The area surrounding the DMZ is the most heavily fortified border in the world.

What’s on the agenda?

Moon would like to discuss a peace treaty with Kim to formally end the Korean War. A peace treaty would require the participation of the United States and China, both signatories to the armistice agreement.

Denuclearization of the Korean Peninsula is also expected be on the agenda.

In the past, North Korea has made denuclearization conditional on the departure of almost 30,000 US troops from South Korea. According to Moon, North Korea has agreed to drop this precondition.

The Moon-Kim summit is expected to set the stage for the Trump-Kim summit, a location and date  for which has not as yet been finalized.