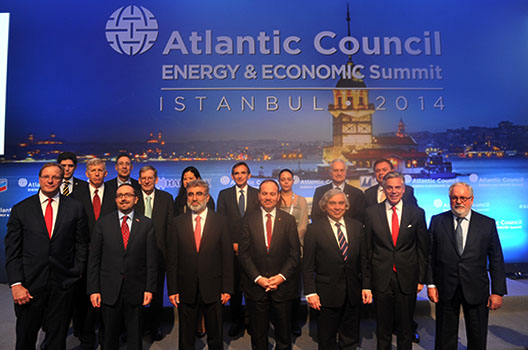 Opinion leaders from politics, media, academia, and the corporate world convened in Istanbul this morning for two days of talks on how governments and companies manage emerging risks and uncertainty in today’s turbulent times.

Keynote speakers at the opening session at the Grand Tarabya Hotel on the Bosphorus were US Energy SecretaryErnest Moniz, EU Commissioner for Climate Action and Energy Miguel Arias Cañete, and Turkish Minister of Energy and Natural Resources Taner Yıldız.

Frederick Kempe kicked off the proceedings, saying that “we hope this summit will give [business leaders and policymakers] new ideas” to tackle global challenges to energy security and political stability.

Governor Jon M. Huntsman, Jr. echoed Kempe’s call to action, focusing his remarks on two key obstacles facing the energy sector today: turmoil in Iraq and Russia’s ongoing aggression in Ukraine that threatens the vision of a Europe “whole, free, and at peace.”

US Energy Secretary Ernest Moniz wrapped up the opening session by expanding on the Summit’s theme of turbulence. He described turbulence as a flow characterized by unpredictability and said that, if harnessed properly, this moment of turbulence could be an impetus for many positive changes in the energy sector.

“Energy security is the collective responsibility of allies and friends,” said Secretary Moniz, while Minister Yıldız discussed the vital interplay between energy, politics, and economics around the globe.

In the afternoon, Iraqi Oil Minister Adel Abdul Mahdi and Kurdistan Regional Government Minister of Natural Resources Ashti Hawrami participated in a session on “Challenges to Stability and Energy Production in Iraq.” According to Minister Abdul Mahdi, improved oil production in Kurdistan is beneficial to Iraq because “Kurdistan is part of Iraq.”