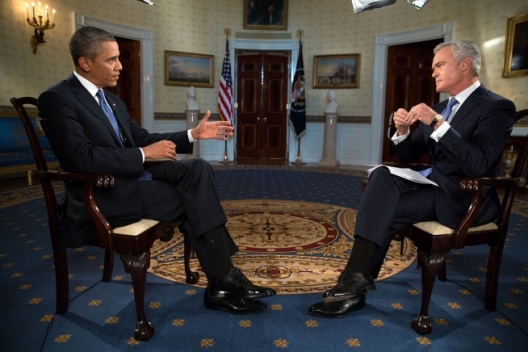 President Obama is pulling out all stops in a thus-far failing bid to convince the American people and their representatives in Congress to back military action in Syria. His secretaries of state and defense have been everywhere talking up the horrors of chemical warfare and the price to be paid in American credibility for inaction. A series of television interviews Monday night will be followed by a primetime Oval Office address Tuesday. Some lament the timing of all of this, with the president having to compete with the opening of the NFL season, the release of the new iPhone, the start of the school year, and even Yom Kippur for attention. Indeed, he apparently postponed the speech one night so as to avoid having to compete with Monday Night Football. His crosstown rival, Redskins quarterback Robert Griffin III, would surely have won that one, even if he didn’t fare so well against the Eagles.

During the run up to the Iraq War, White House chief of staff Andrew Card famously observed, “From a marketing point of view, you don’t introduce new products in August.” But, given how that launch turned out, perhaps the better lesson is that wars that need to be “marketed” probably shouldn’t be fought at all. Indeed, if requires a hard sell to divert the public’s attention from their daily lives, it’s a good bet that the interest at stake is less than vital.

Franklin Roosevelt didn’t need to mount a marketing campaign to get buy-in from Congress after Pearl Harbor; they declared war on Japan the very next day with only one vote against.

George W. Bush did not have to compete with football season for news coverage after the 9/11 attacks. Not only was even ESPN wall-to-wall with talk about the attacks and their impact but both the NFL and the NCAA promptly postponed their games—as did Major League Baseball and most other sporting leagues. Even the Super Bowl was delayed.

To be sure, the president isn’t proposing anything like our responses to those two attacks.

Deputy National Security Advisor Tony Blinken assures us that, “This is not boots on the ground. This is not Afghanistan. This is not Iraq. This is not even Libya.” Secretary of State John Kerry helpfully adds that it will be an “unbelievably small, limited kind of effort.”

Apparently realizing that this messaging also gets to his counterpart in Damascus, Obama told NBC News Monday night that, “The U.S. does not do pinpricks,” adding the non sequitur “Our military is the greatest the world has ever known.”

The constantly changing, contradictory, and convoluted logic trotted out over the last three weeks has not exactly inspired confidence.

Is it any wonder that some two thirds of the American public have yet to be persuaded that military action is in the national interest? Or that the president is “not confident” that Congress will authorize it?

Sunday, Bard College professor Walter Russell Mead wryly expressed his hope that “the Good Foreign Policy Fairy comes along and waves her magic wand over this Syria mess and somehow helps the administration avoid the disaster it has struggled so hard to produce.” The next day, she did, in the form of the make-it-up-as-they-go-along amateurism that has characterized the selling of this war.

Asked by a reporter in London Monday whether there was any way for Assad to avoid being hit by the unbelievably small strike that would be by no means a pinprick, Kerry ad-libbed, “Sure. He could turn over every bit of his weapons to the international community within the next week, without delay.” He added, “But he isn’t about to.”

As he flew back to Washington to continue pressing Congress, he got a call from his Russian counterpart, Sergei Lavrov, saying that his country welcomed Kerry’s “plan.” He followed this with a public announcement that “We are calling on the Syrian authorities [to] not only agree on putting chemical weapons storages under international control but also for its further destruction and then joining the Organization for the Prohibition of Chemical Weapons.”

Syrian foreign minister Walid al-Moualem followed this with a statement that his government “welcomes Russia’s initiative, based on the Syrian government’s care about the lives of our people and security of our country.”

Obama reacted with understandable skepticism to this development, acknowledging that it “could potentially be a significant breakthrough” but warning that “you have to take it with a grain of salt.” He promised to “run this to the ground” and “make sure that we see how serious these proposals are.”

Presuming this is not just a stalling move by Moscow, it would be the best possible outcome from the mess created by the administration’s muddled policy pronouncements. To be sure, we would be no closer to the president’s stated objective of removing the Assad government and Assad would not be punished for repeatedly crossing the Obama “red line” on chemical weapons. But Obama could reasonably claim a win for getting Assad to give up the prospect of using said weapons in the future without having to fire so much as a single Tomahawk. More importantly, we would avoid fighting an unbelievably small, limited kind of war that almost nobody actually wants to fight.

James Joyner is a security studies professor at the Marine Corps Command and Staff College and a nonresident senior fellow with the Brent Scowcroft Center on International Security at the Atlantic Council. These views are his own.