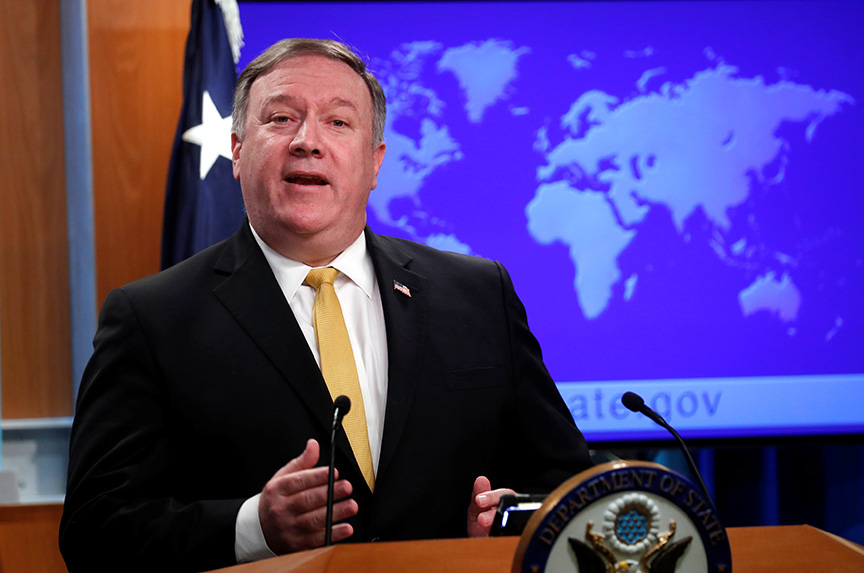 Trump administration pulls out of 1955 treaty with Iran

US President Donald J. Trump’s administration said on October 3 it was terminating the 1955 Treaty of Amity with Iran. Announcing the decision, US Secretary of State Mike Pompeo noted “the absolute absurdity” of remaining in the treaty given the prevailing high tensions between the United States and Iran.

Later, speaking at the White House, US National Security Advisor John Bolton accused Iran of having made a “mockery” of the treaty “with its support for terrorism, provocative ballistic missile proliferation, and malign behavior throughout the Middle East.”

Barbara Slavin, director of the Atlantic Council’s Future of Iran Initiative, said: “This is another example of the United States walking away from an international agreement, however outdated.”

“It’s interesting that Iran is trying more and more to cloak itself in international legitimacy while the United States ignores, rejects, violates multilateral and bilateral accords,” she added.

Pompeo, however, accused Iran of ignoring the treaty “for an awfully long time.”

The 1955 Treaty of Amity regulates economic and consular ties between the United States and Iran.

Article I of the treaty states: “There shall be firm and enduring peace and sincere friendship between the United States of America and Iran.”

That is clearly no longer the case.

In November 1979, twenty-two years after the treaty was signed, the US-Iran relationship was strained by the hostage crisis in Tehran.

Holly Dagres, a nonresident fellow with the Atlantic Council and editor of the Council’s IranSource blog, said: “Since the 1979 revolution, previous US administrations have relied on the 1955 Amity Treaty to hold Iran accountable on several occasions, including the 444-day hostage crisis.”

There was a brief glimmer of a thaw between Washington and Tehran during former US President Barack Obama’s term in office. During this time, the United States negotiated and signed a multilateral agreement aimed at curbing Iran’s nuclear weapons program.

On the campaign trail, Trump had slammed the agreement as a terrible deal. In May, he pulled the United States out of the deal, formally known as the Joint Comprehensive Plan of Action (JCPOA); the United States has since snapped back some sanctions on Iran with another round expected in November.

What provoked the US decision?

The US decision to withdraw from the Treaty of Amity followed an order from the United Nations’ top court—the International Court of Justice (ICJ)—for the United States to lift sanctions on “goods required for humanitarian needs” in Iran, including medicines and medical devices, food, and agricultural commodities.

ICJ’s Judge Abdulqawi Ahmed Yusuf wrote that these sanctions “may have a serious detrimental impact on the health and lives of individuals on the territory of Iran.”

The ICJ does not have the power to enforce its decisions. Dagres said the ICJ’s provisional measures “are essentially telling the United States to cease sanctions on Tehran until they make a final ruling.”

“The Trump administration’s decision to cancel the treaty is because it hurts their current Iran policy, which is to apply the utmost pressure through sanctions and isolation,” she explained.

Pompeo, who said the withdrawal decision was “thirty-nine years overdue,” added that the ICJ ruling “marked a useful point for us to demonstrate the absolute absurdity of the Treaty of Amity between the United States and the Islamic Republic of Iran.”

Pompeo said that Iran had brought “a meritless case” in the ICJ alleging violations of the Treaty of Amity.  “Iran seeks to challenge the United States’ decision to cease participation in the Iran nuclear deal and to re-impose the sanctions that were lifted as a part of that deal,” he said, while accusing Iran of  “attempting to interfere with the sovereign rights of the United States to take lawful actions necessary to protect our national security.”

On the question of humanitarian issues, Pompeo said: “We have been clear:  Existing exceptions, authorizations, and licensing policies for humanitarian-related transactions and safety of flight will remain in effect.”

Pompeo and Bolton both termed the ICJ’s ruling a defeat for Iran, but expressed disappointment that the court did not recognize that it has no jurisdiction to issue orders with respects to US sanctions aimed at protecting its security and that the court, as Bolton put it, “allowed Iran to use it as a forum for propaganda.”

Iran continues to pose challenges to its neighbors through its support for Syrian President Bashar al-Assad, the terrorist groups Hezbollah and Hamas, and Houthi rebels in Yemen. The nuclear deal was never intended to address these challenges.

“Given Iran’s history of terrorism, ballistic missile activity, and other malign behaviors, Iran’s claims under the treaty are absurd,” said Pompeo.

He expressed the hope that Iran’s leaders “will come to recognize that the only way to secure a bright future for its country is by ceasing their campaign of terror and destruction around the world.”

As for the potential for fallout from the US decision, Pompeo said simply: “We’ll see what the practical fallout is.”

Image: US Secretary of State Mike Pompeo, speaking at the State Department in Washington on October 3, announced the US decision to withdraw from the 1955 Treaty of Amity with Iran. (Reuters/Kevin Lamarque)