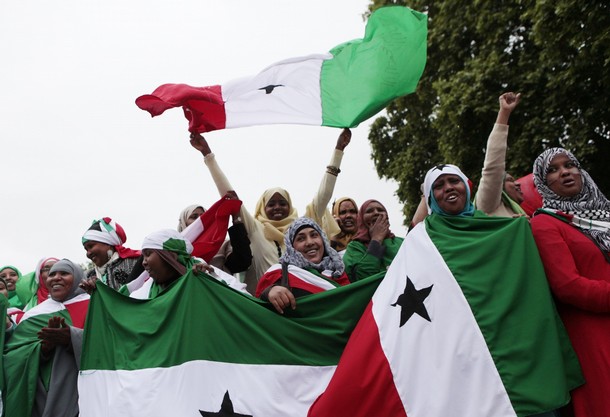 Today is the twentieth anniversary of the day when, in the wake of the collapse of the Somali state, clan elders in the onetime British Protectorate of Somaliland proclaimed their sovereignty. In the two decades since, while the rest of the country became the exemplar par excellence of a failed state, one best known today for maritime piracy and a brutal Islamist, Somalilanders have more or less succeeded in building for themselves a viable polity, albeit one lacking international recognition, due to the resistance of other African countries to secessionism.

Left to their own devices, Somalilanders nonetheless drafted a constitution which provided for an executive branch consisting of a directly elected president and vice president and appointed ministers; a bicameral legislature consisting of an elected House of Representatives and an upper chamber of elders, the guurti; and an independent judiciary. The most recent elections, the internationally-monitored presidential poll in June 2010, resulted in the defeat of incumbent Dahir Riyale Kahin, the election of Ahmed Mohamed Mohamoud (popularly known as “Silanyo”), and a smooth transition between the two—an unheard of occurrence in the region.

Despite its largely successful record and notwithstanding that a 2005 report of a African Union fact-finding mission which concluded that “the fact that the union between Somaliland and Somalia was never ratified and also malfunctioned when it went into action from 1960 to 1990, makes Somaliland’s search for recognition historically unique and self-justified in African political history” and recommended that “the AU should find a special method of dealing with this outstanding case,” no country has yet recognized Somaliland’s bid for independence. This apparent snub, while grating to Somalilanders, has not prevented them from building a vibrant polity with a lively civil society.

Having to rely on themselves, Somalilanders found the demobilization of fighters from the Somali civil conflicts of the 1980s and 1990s, the formation of their own defense and security services, and the extraordinary resettlement of over one million refugees and internally displaced persons (out of a population of just over three million) fostered the internal consolidation of their aspiring state, while the establishment of independent newspapers, radio stations, and a host of local NGOs and other civic organizations reinforced the nation-building exercise. The stable environment thus created facilitated modest investments by both local and diaspora businessmen who have built, among other things, a telecommunications infrastructure that is more developed and varied than in any of Somaliland’s neighbors.

Despite its lack of an international standing and the often amateurish missteps of its politicians, Somaliland makes a vital contribution to regional and global security. Its port at Berbera is an important outlet for landlocked Ethiopia. Its ragtag coast guard keeps its 740-kilometer coastline largely free of piracy, releasing international warships to patrol elsewhere. Its security services have cooperated with U.S. and NATO forces hunting terrorists in the region and French commandos have used its territory to launch rescues of citizens held captive by pirates in the neighboring Puntland region. Hargeisa, the Somaliland capital, even accepts ethnic Somali detainees released from Guantanamo because the U.S. government is loath to send them back to the unreliable Transitional Federal Government (TFG) in Mogadishu.

The failure of the no fewer than fourteen different internationally-backed attempts to reestablish a national government in Somalia and the diminishing legitimacy and increasingly untenable nature of the current effort underscores the need to take a more critical look at what it means to be a state in the world today. In what sense is the TFG—which, as I noted in Congressional testimony two years ago is “not a government by any common-sense definition of the term: it is entirely dependent on foreign troops…to protect its small enclave in Mogadishu, but otherwise administers no territory; even within this restricted zone, it has shown no functional capacity to govern, much less provide even minimal services to its citizens”—entitled to be considered a sovereign?

Conversely, by what rational criterion can Somaliland be denied recognition of its independence? Given the chaos that characterizes southern and central Somalia (pace the surreal picture painted by the TFG’s latest prime minister as he toured Washington last week seeking support for yet another extension of his regime’s mandate) as well as the demographic reality that the majority of the more than three million Somalilanders were born after the region declared its resumed independence and have never thought of themselves as citizens of a unitary Somalia, can anyone imagine a scenario where it would be possible to reincorporate them into such a “state” without provoking even greater conflict across the Horn of Africa? The Atlantic’s Graeme Wood has succinctly highlighted the sheer preposterousness of the notion: “A reconstituted Somalia would require reconnecting Somaliland with what may be the world’s most spectacularly failed state. Where Somaliland has a fledgling coast guard, Somalia has flourishing pirates, and where Hargeisa has a form of democracy, Mogadishu has howling anarchy punctuated by fits of sharia law. Yet this is the alternative urged by nearly everyone.”

For too long the United Nations, the African Union, and neighboring countries, as well as Western governments and donor groups have tried to pressure, cajole, and bribe Somalis into going along with a charade whereby what had long ceased to be a state was said to still be one while what was one in all but name was denied recognition. The true cost of this refusal, whether willful or by default, to acknowledge reality has, after two decades, to be measured not only in billions of dollars in wasted aid to corrupt entities like the TFG and the costs exacted by war and piracy, but, tragically, in countless lost lives and missed opportunities. Fortunately, there are indications that the Obama administration and a number of European governments are beginning to reexamine their approach. A good place to start might well be the one part of the former Somali state that has shown the most promise.