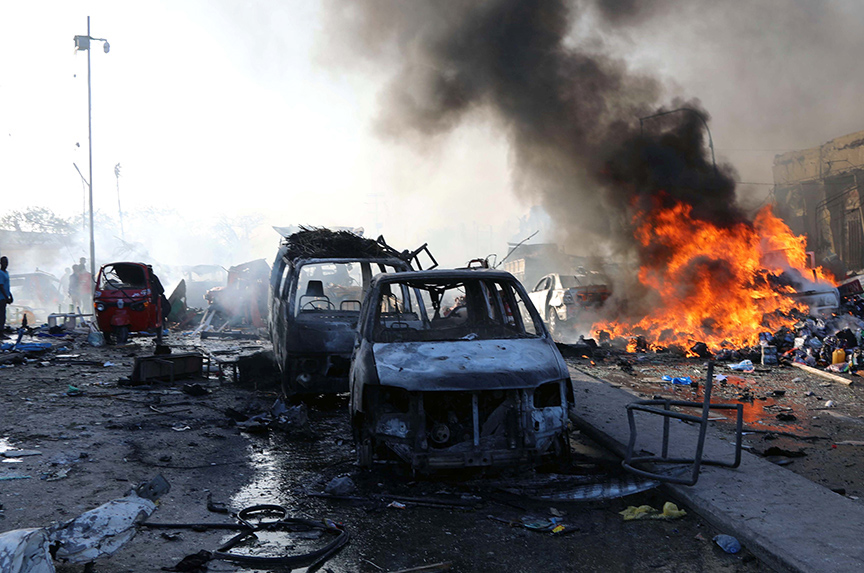 A truck bombing in the Somali capital, Mogadishu, on October 14 killed at least 300 people and left hundreds of others seriously wounded. (Reuters/Feisal Omar)

This weekend’s truck bombing in the Somali capital, Mogadishu, was the worst assault on civilians in that country’s long, sad history. But such attacks are a weekly event in Somalia and have been for the past decade. This attack was dramatically worse than most, but surely it won’t be the last. And it highlights a truth that Washington cannot afford to ignore any longer: its “strategy” in Somalia just is not working.

Al Shabaab was once a radical youth militia on the fringes of Somali politics, but it was transformed into a national resistance movement when policymakers in Washington decided to bankroll and provide political cover for Ethiopia’s brutal invasion and occupation of Somalia. Ethiopia’s occupation enraged the Somali people, who turned to the only armed group that was capable of resisting the Ethiopian army and the unpopular, foreign-created government that it was attempted to install in Mogadishu.

Al Shabaab also depends on the government: the Somali people’s perception that the government has been captured by one clan at the expense of all the others, ensures that al Shabaab retains a base of support among disenfranchised clans. Thus, al Shabaab fighters continue to weave effortlessly in and out of Mogadishu, planting bombs, undermining Somalis’ sense of security, and making a mockery of the government’s claims that it is in control of the country. One decade, more than a billion dollars, and tens of thousands of peacekeepers later, the Somali government is clearly not in control—not of its capital city, not of the top two-thirds of the country, not of most of the rural areas, and not of the areas that have effectively been annexed by the Kenyan military. Somalia is a mess.

The tragedy is that the Somali people are helpless, bloodied pawns in an artificial stalemate. Al Shabaab would have little reason to launch attacks in Mogadishu were it not for the presence of the Somali government. American and European policymakers vaunt the progress that the Somali government has made over the past 10 years, but the reality is that almost nothing has changed. When the African Union peacekeepers leave—as sooner or later they must—this “internationally recognized” government will utterly and immediately collapse, and there will be nothing to show for the decade of effort that the troop-contributing countries have poured into Somalia. The only legacy of the peacekeeping mission will be the weapons, intelligence, and training that Washington has lavished on the authoritarian leaders of Burundi, Uganda, and Ethiopia to pursue this fight.

Policymakers in Washington need a new set of priorities. They should stop promoting the Somali government at all costs, and focus instead on ending this bloodshed (which has already spread to Kenya and is poised to seep across the rest of the region). Al Shabaab cannot be defeated militarily: the problem requires a political solution. And a political solution requires Washington to deal directly with al Shabaab, and with the many clan factions that feel threatened by the current government. It cannot continue hiding behind the fiction that the government is in control, or will be anytime soon.

Washington’s proposed solution to this crisis—to create an army for the Somali government that can defeat al Shabaab without foreign assistance—is laughably unrealistic. Stepped-up efforts to create an army for the Somali government have led to a dramatic escalation in violence in Mogadishu over the past few months, as the government has attempted to disarm and decommission many soldiers, particularly from the Darod clan. The weekend’s truck bombing is part and parcel of this escalation, and there is no end in sight.

Soldiers defect from the Somali army faster than they can be trained. [More than 60,000 have defected so far—only about 5,000 remain loosely under arms. Most of those remain loyal to militia commanders and may or may not choose to fight al Shabaab when called. Indeed, Somali soldiers have deserted their positions when alerted to a pending attack.] Even if Washington and its allies were able to stop the flood of desertions and build something approximating a functioning army, it is unclear to whom any real Somali army would report. Rival administrations have sprung up all over Somalia, and they may well resort to another round of civil war rather than hand real military power to the regime in Mogadishu.

If civil war is not what Washington wants to see in Somalia, it needs to change course now.