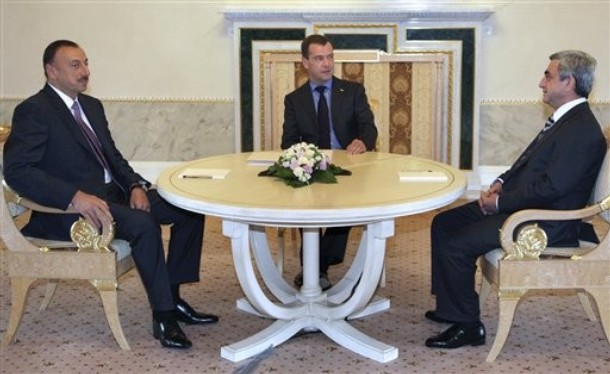 Two years after the Russian invasia of Georgia, Europe could face another war, this time between Armenian and Azerbaijan over the Nagorno-Karabakh. Azerbaijan is growing stronger and becoming increasingly impatient with international mediation efforts as its territory remains under Armenian occupation. At the same time, Yerevan is digging in, and refuses to begin the process of comprehensive withdrawal of its forces from Azerbaijan.

The problem is not new. Fifteen years of international mediation led by the OSCE Minsk Group has produced no results.  Even the recent meeting of presidents sponsored by Mr. Medvedev on the margins on of the St. Petersburg economic forum produced no new breakthroughs.

To the contrary, things are getting worse. A skirmish on the line of contact followed immediately after the St. Petersburg meeting, leaving a number of dead on the Armenian side. Azerbaijan also used this opportunity to increase its military spending to surpass Armenia’s state budget. This is telling of Baku’s new attitude and Europe should take note as we move closer to the brink of war.

Azerbaijan’s territory is under occupation.  International law is on their side and a host of international agreements and treaties have been signed and passed — from UN Security Council resolutions, to OSCE documents, to more recently, the EU Parliament resolution — all calling for Armenia to withdraw its forces and respect Azerbaijan’s territorial integrity and sovereignty. After investing fifteen years into an international peacekeeping process, which has yielded no results, Baku is naturally looking for alternative options to win back its lost territory.

In terms of the peace process, there isn’t a solution that hasn’t been suggested and rejected by one or the other side. After so many years of mediation it is hard to imagine that there’s a magic formula hiding under a rock, which will satisfy both sides equally. An occupation produces a zero-sum setting making one side’s gain the other’s loss. To move beyond the status quo, and towards cooperation, external pressure is inevitable and necessary. Until the EU puts Armenia under sanctions – suspending its EU integration process – Yerevan will continue to stall over its withdrawal from Azerbaijan. They will continue to excuse their inaction with the difficulties of their domestic political process, and the fear that the Armenian community living in Nagorno-Karabakh will not be adequately protected if Armenian forces are out.

These are convenient excuses, which are standing in the way of peace, and it’s shameful that the EU is willing to tolerate them as legitimate political reality.  International mechanisms exist to protect the Armenian population of Nagorno-Karabakh when the territory is returned to Azerbaijan. Kosovo is a good example of how an international mission can be organized to ensure the security of an ethnic minority; the Serbs living in an independent Kosovo today have objective security guarantees by the EU and NATO forces.

The payoffs are there for Europe and the region. Nagorno-Karabakh is the biggest obstacle to full regional integration and South Caucasus economic cooperation.  Because of the conflict, the region’s European perspective remains handicapped, Russia’s regional presence is over emphasized, and the economic market remains fragmented, and as such less interesting for foreign investors. Second, the objective risk of conflict is high, which makes it difficult to convince European companies to invest capital into this region. European energy security is compromised by the Nagorno-Karabakh conflict too. Caspian energy could feed Armenia as well as flow through Armenia to Turkey. This rout is shorter than the Georgia option.  Multiple routs also ensure price competition, which is good for the European consumer who will be better protected against price fixing.

Not least, European security will be enhanced. For one, Azerbaijan will gain full control over its boarder, which means it will be better able to monitor and avert trafficking, smuggling and terrorist threats originating in Afghanistan and moving through Central Asia and the South Caucasus towards Europe. Border security in the broader Caspian region is key for European security.

The bottom line from Baku’s perspective is becoming crystal clear: Azerbaijan will take back its territory, through peace or war. The reality on the ground has changed, and the balance of power is on Azerbaijan’s side, while the Baku political top is growing increasingly frustrated with unyielding international mediation. The only question remains Europe – is Brussels ready to accept this new reality on the ground, and what will it do about it?

Borut Grgic is a non-resident senior fellow at the Atlantic Council and the founder of the transCaspian initiatives.