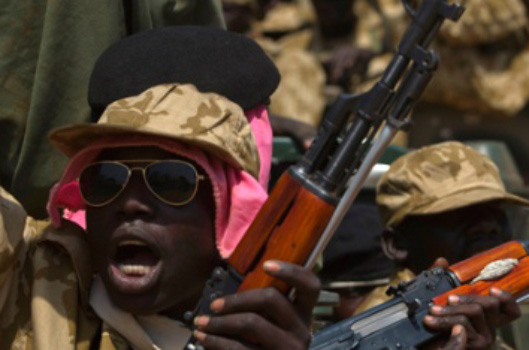 As South Sudan's internal conflict rages on, tens of thousands have been killed and nearly two million people displaced. (Reuters)

Peace talks aimed at ending South Sudan’s civil war are ‘going nowhere’ because the process is mostly led by countries that are party to the conflict, according to Dr. J. Peter Pham, director of the Atlantic Council’s Africa Center.

The on-again, off-again talks — brokered by the Intergovernmental Authority on Development (IGAD), the East African regional bloc — resumed in the Ethiopian capital of Addis Ababa on December 18.  Last week marked one year since the start of a civil war in South Sudan that has killed tens of thousands of people, displaced close to two million, and pushed the fledgling nation to the brink of famine.

Multiple cease-fire agreements between the forces of South Sudanese President Salva Kiir and his former vice president, Riek Machar, have been violated.

In July of 2013 — just two years after South Sudan became independent from Sudan — Kiir dismissed Machar and the rest of his Cabinet. The tense political situation turned violent on December 15, 2013, as forces loyal to Kiir sought to crush what the government claimed was an attempted coup by Machar in the capital city of Juba.

As efforts to get South Sudan on track are renewed, Pham tells the New Atlanticist’s Ashish Kumar Sen: “The only real solution is some sort of transitional arrangement where the transitional authorities are not allowed to compete for political power in the subsequent elections.”

Kiir “absolutely is not” the right man to lead such a transitional arrangement, said Pham.

Excerpts from the interview:

Q: This month marked one year since the outbreak of fighting between forces loyal to Salva Kiir and Riek Machar. Cease-fire agreements have been repeatedly broken. The United Nations estimates tens of thousands have been killed. There is a risk of famine. Is South Sudan a failed state?

In order to be a failed state you have to have been a state first. South Sudan is a state only in the most technical legal sense of a state, not in any real sense. Instead of failed state, I would like to say it’s a stillborn state.

There were only six months between the referendum for southern secession and independence during which time state structures, previously nonexistent, were kind of thrown up in an almost haphazard fashion. No elections have been held since South Sudan became independent. The regime that was the regional authority overnight became a national government. What had been a rebel army (or a national liberation movement — call it what you will) morphed itself into a party without really becoming a party in the conventional political sense of an institution consisting of voluntary members united by shared ideas and seeking to achieve common goals through the acquisition and exercise of power.

With all this, plus the host of unresolved issues around identity and power sharing which were not dealt with during the transition, I am frankly surprised it took so long to arrive at the conflict we find ourselves confronted with today.

The conflict broke out because Salva Kiir thought he was smart enough to eliminate his political opposition in one fell swoop. He wanted to have a ‘night of the long knives,’ except he didn’t even have a pocketknife.

The claim was made that there was a coup. The US government has made clear there was no evidence of a coup. Salva Kiir manufactured an excuse to physically eliminate the opposition, but didn’t have minions competent enough to actually carry out that straightforward task.

Q: Negotiations in Addis Ababa, mediated by the Intergovernmental Authority on Development (IGAD), center on a plan that keeps Salva Kiir as president and creates the position of prime minister for Riek Machar. What is the likelihood of such an arrangement working?

The IGAD process, with the exception of the effort put in by the Ethiopians, is going nowhere. It is literally a farce that the international community chooses to pretend is working so that it devolves responsibility onto Africans and avoids being dragged in.

Why is it a farce? It is led by three countries—Uganda, Kenya, and Ethiopia. Of the three, only Ethiopia is making an effort.

Uganda is a party to the conflict. Salva Kiir would either be dead or in exile today if Uganda had not intervened militarily to save him in the early days of the conflict. So Uganda is hardly a neutral, honest broker.

Kenya has varied in its response. Earlier this year, in violation of requests by the UN Security Council that people not continue to stoke the conflict, Kenya permitted Salva Kiir’s government to buy large quantities of Chinese arms and ship them through Kenya. More recently, Kenya’s position has modified somewhat to an unofficial agnosticism. Leaders from both sides of the conflict, plus their families and their assets, come and go freely in Kenya. So if the Kenyans were serious about sanctions, it has the screws to turn; however, it chooses not to exercise that leverage.

The ultimate irony of all this is Kenya should know from its own government of national unity that these power-sharing agreements don’t work. Kenya lost a lot of time and money—maintaining over ninety ministers and deputy ministers can get quite expensive—when President Mwai Kibaki and Prime Minister Raila Odinga were forced to cohabitate from 2008 to 2013. If such arrangements don’t work in a reasonably well-established state like Kenya, how can anyone expect it to work in a place like South Sudan where there never was a functioning state?

The only real solution is some sort of transitional arrangement where the transitional authorities are not allowed to compete for political power in the subsequent elections. Their job would be to facilitate national dialogue that never occurred, build institutions that are appropriate for this new state, and hold elections in which all parties should be allowed to fairly compete.

Q: Is Salva Kiir the right person to lead such an arrangement?

He absolutely is not. We had a political conflict, but we would not have had a military conflict but for his bungling and, to be quite frank, criminal incompetence. He is responsible and needs to be brought to book—as do all those complicit in atrocities during the civil war—but no one talks about the ethnic cleansing of Juba after the so-called coup of December 2013 and the atrocities carried out there in his name, which fanned the flames of conflict. Salva Kiir doesn’t have clean hands, and if there actually were an election I doubt he could win a majority.

Q: The discussions in Addis Ababa are essentially about a transitional government. Is any attention being given to reform of the SPLM (Sudan People’s Liberation Movement)?

Even before you talk about reform of the SPLM you have to talk about the nature of the South Sudanese state. This is a conversation that never has taken place. There are fundamental questions about national identity and the distribution of resources, distribution of power, and other basic issues that have never been addressed. In an area with dozens of ethnic groups, no one or even two of which form a majority of the population, is a winner-take-all centralized government the way to go? I think from lessons learned around the world that it is probably not the case.

Q: On April 3, 2014, US President Barack Obama issued an executive order which provides the authority to sanction individuals who threaten the peace, security, or stability of South Sudan. To date, four individuals have been designated under this authority. Some members of the US Congress have called for targeted sanctions against prominent figures on both sides of the conflict that are spoilers to the peace process. Are targeted sanctions the solution?

Sanctions have to be meaningful. So far, a literal handful of people have been sanctioned. But these are second-tier individuals who many South Sudanese, much less people abroad, have never heard of before. None of the principals have been targeted, nor their families. Until the sanctions get to hit those who are most responsible, the approach is not going to work.

Moreover, sanctions will only work if you have the buy-in of the neighbors. Many of these people [those who should be sanctioned] don’t have accounts in Washington or Europe. But they do have homes and accounts in Kenya, and some in Uganda. Until you have the neighboring states putting the squeeze on them, the sanctions really are not going to have the desired impact.

Q: What is the likelihood that a UN Security Council arms embargo could ensure that more weapons are not flooding into South Sudan?

It may be helpful to have it on the record. The Security Council has not called directly for an arms embargo, but has certainly called for no one to stoke the fires by adding weapons, fighters, etc., to the conflict. The intent of the Security Council is clear, but that alone hasn’t been sufficient to stop Kenya from allowing weapons to be shipped to one side in the fight and it hasn’t stopped Uganda from intervening in the fight. So, again, until there is buy-in from these countries, I think such efforts would be largely symbolic.

What can, however, work is—even allowing for the previous arrangements under which South Sudan became independent—if the international community passed a UN Security Council resolution saying of Salva Kiir, whose term expires in a matter of months, ‘When his term ends, we’re not throwing him out of office, but he is no longer recognized as head of state.’

That would choke off his ability to make deals, which he is doing now, to get money to pay his military based on future assets and future earnings from oil. They don’t have the money now. They are basically mortgaging their future. That is doubly dangerous because it fuels the current conflict and perpetuates it, and it hamstrings the next government from being able to have resources for the much-needed development of the country.

Q: What should the US be doing to get South Sudan back on track?

We have to be modest about the international community’s ability to influence the outcome. We can certainly help shape it. Sanctions send a message, political pressure sends a message—but at the end of the day, peace is only going to come when the South Sudanese tire of the fighting and decide that they are going to either build a single state together, or perhaps even go their separate ways in smaller entities.

We’re talking about people who are continuing some very old—in some cases, even age-old—patterns of conflict, identity, and struggles, over which the international community has very little familiarity, much less leverage. Why does Salva Kiir not trust Riek Machar, and vice versa? One has to go back to the terrible conflicts within the southern camp in the 1990s when the people who are now South Sudanese had supposedly been united in fighting the rest of Sudan.

For anyone who thinks the US has that much influence, consider the fact that at the margins of the UN General Assembly last year, you had President Salva Kiir lie to President Obama—to his face—that South Sudan is not supporting rebels in Sudan. That shows you how little respect, much less leverage, we have at the end of the day. I think we delude ourselves if we think we have more. We can and should make an effort to ameliorate what we can, but we need to be realistic about what we can hope to achieve until the warring parties themselves come to their senses.