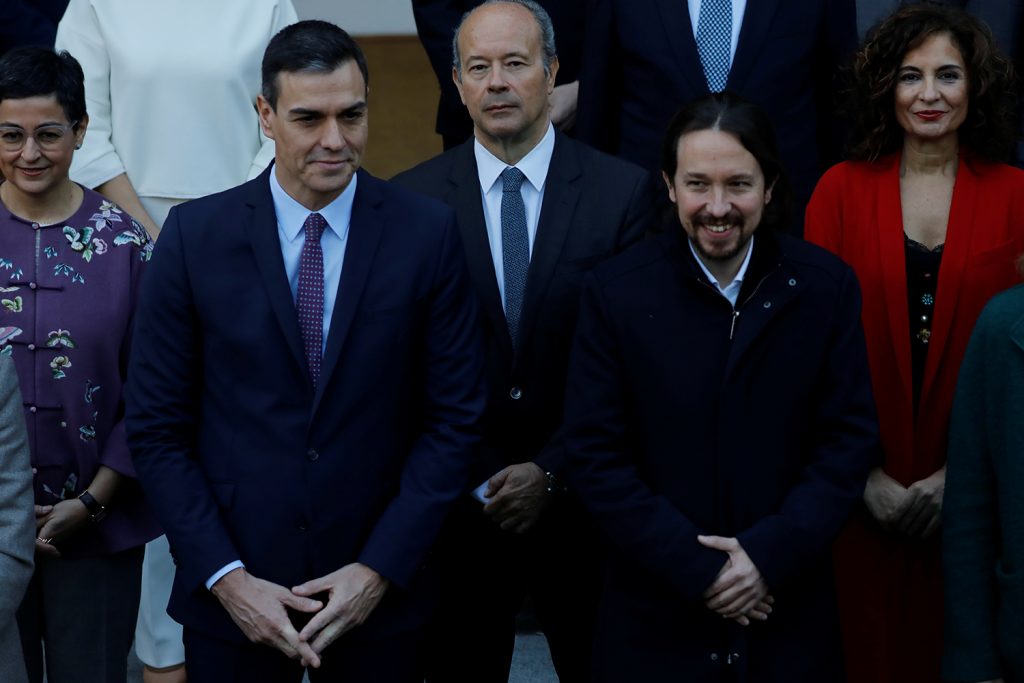 After two general elections in nine months, Spain finally has a government. But the new coalition is a fragile one that will have to deploy creative solutions to address fragmentation along three dimensions: political, territorial, and social. It will be challenging, but it may work.

A grand coalition would have been the natural scenario under normal conditions, but not with the current political fragmentation both on the right and the left. Prime Minister Pedro Sánchez did not even try. Instead, he bit the bullet and agreed to go with Unidas Podemos (UP) on a “progressive,” but still a minority, governing coalition. The approval of the government in Parliament nevertheless needed to overcome the second source of fragmentation: secessionist and regional parties.

Secessionists are divided. One faction, led by former Regional President of Catalonia Carles Puigdemont, who is self-exiled and now elected to the European Parliament, is doubling down on the mirage of independence. They ignore or violate Spain’s legal and institutional framework, while pretending to only abide by the will of the Catalan Parliament and their grassroots organizations. The other, led by former Catalonian Regional Vice President Oriol Junqueras, currently in jail on a conviction of sedition, acknowledges that secession is not feasible today, while still actively working towards it. The Spanish Socialist Workers’ Party (PSOE) and UP thus struck an agreement with Junqueras’ party, the Republican Left of Catalonia (ERC), to recognize that a solution to the Catalan situation cannot come only judicially and that the underlying social and political conflict requires openness, negotiation, and compromises. ERC then passively let the PSOE-UP coalition win in parliament on January 7 , achieving a razor-thin majority of two seats over the opposition right bloc.

With such a slim majority, the government is fragile, as is the governing coalition. The dialogue on Catalonia is undoubtedly fraught with difficulties and is fiercely opposed by the right-wing bloc, and silently by many within PSOE. Yet the alternatives are worse.

A tougher stance on Catalonia, that the People’s Party (PP), Ciudadanos, and Vox call for, will only aggravate the perception of many in Catalonia of mistreatment, misunderstanding, and backward politics by Spain and could grow support for secession. Overreliance on judicial verdicts and arrests would almost certainly breed further discontent and make it possible for secessionists to gather majority support in Catalonia, which is not the case at present. Yet overgenerously yielding to secessionist demands would also certainly create backlash in the rest of the country. Growing support from the Catalan public for engagement in an inclusive Spanish project is the right approach but will be bumpy.

Managing political initiatives and personalities within the coalition will not be easy either, particularly with one partner lacking governing experience at the national level. Both parties agreed to a coalition program with a more social and environmental focus while maintaining economic growth and sustainability. More attention on social issues is necessary given the scars of the 2008 financial crisis that hit middle- and low-income classes harshly and increased inequality. Income inequality is among the highest in the EU. Unemployment has declined from 26 percent in 2013 to 14 percent but is still the second-highest in the EU, as is youth unemployment. Yet there is little room for higher government expenditure with decelerating growth, a structural government deficit at 3 percent, and public debt at 96 percent of gross domestic product. That helps explain the composition of the cabinet, a case study of political checks and balances.  UP’s new ministers are in charge of social portfolios and are carefully matched with experienced, authoritative PSOE economic cabinet members, and four vice presidents will coordinate political, economic, social, and environmental and demographic transition policies.

The coalition program also resonates with the European Commission priorities, and the choice of economic and sustainability vice presidents and cabinet members bodes well on Madrid’s will and capacity to play in the European and international arenas. Nadia Calviño, who was already minister for the economy in the previous Sánchez government, will now steer the economic and digital portfolios as vice president. She is well respected in the Eurogroup and other EU circles, where she served in top positions until she joined the Spanish government in April. Her strengthened position is a signal of reassurance to investors and EU partners. Teresa Ribera, also staying in the cabinet and elevated to a vice president position, chaired the Organisation for Economic Cooperation and Development’s Sustainable Development and International Relations Institute, and had been active in international fora before her return to government last year. Arancha González, the new foreign minister, has a long international career, most recently as UN assistant secretary-general, executive director of the International Trade Center, and before that holding positions at the World Trade Organization and the European Commission. Other members also have the background and capacity needed to make influential contributions to European positions and improve transatlantic relations.

The successful government formation in Spain is good news for the transatlantic community. But political, territorial, and social polarization will challenge the new government’s ability to provide four years of necessary stability. The choices made so far on the three potential fault lines may not be optimal, but alternative scenarios were not better, and the selection of key cabinet members is reassuring. This seems to be confirmed by the record subscription and low interest rates of Spain’s syndicated sovereign debt issue on January 14.

Will Italy get a new government or elections?

The collapse of the Italian government comes right before crucial budget negotiations.

Greece embraces the center and continues course out of crisis

“Greece is now reinforcing the strength of the center in European politics, rather than fueling a move toward the fringes,” Atlantic Council Executive Vice President Damon Wilson said.

This is a change year for the Parliament. One hopes that in the next cycle in 2024 things will go from unsettled to focused. But as always with the European Project, hope springs eternal.

Image: Spain's Prime Minister Pedro Sanchez and member of his cabinet pose for a family photo as they arrive to attend the first cabinet meeting at the Moncloa Palace in Madrid, Spain, January 14, 2020. REUTERS/Jon Nazca