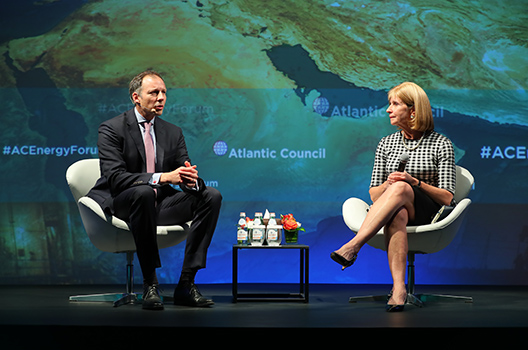 US Assistant Secretary of State in the Bureau of Energy Resources Francis R. Fannon said on January 12 that energy policy will be a key pillar in two of the Trump administration’s new diplomatic efforts: the Middle East Strategic Alliance and the Free and Open Indo-Pacific initiative.

Fannon, who spoke to the Atlantic Council’s Global Energy Forum in Abu Dhabi in a moderated session with JFK Belfer Center for Science and International Affairs Senior Fellow Paula Dobriansky, said the administration was motivated to include energy in these initiatives because they understand that “energy is foundational economic security, which is foundational to political stability and peace. It is all connected.”

The Trump administration has been putting together plans for a new political and security alliance in the Middle East to confront Iran since the summer of 2018. The new “Middle East Strategic Alliance (MESA)” aims to unite the six Gulf Arab states, Jordan, Egypt, and the United States together to contain Iran’s influence in the region. US Secretary of State Mike Pompeo reiterated Washington’s desire to see the pact solidified in his wide-ranging policy speech to the American University in Cairo on January 10.

Fannon reported that he had just been to Oman where he was in discussions on the economic pillar of MESA, of which he said “energy is the cornerstone.” The United States will try to build on the domestic energy policies of its allies in the region and look for new areas of cooperation. Fannon praised the “real stepping up by the governments in the region to reform the way in which energy is priced and traded allowing for energy to be priced so that new types of energy can compete with existing sources.” Through tighter cooperation, Fannon said, the United States hopes to “ensure open, efficient, and transparent markets” in the region.

Energy will also play a role in the Free and Open Indo-Pacific initiative, which was rolled out by US President Donald J. Trump in November 2017 as a way to compete with China’s global One Belt, One Road project. “Asia is the growth engine for the world in terms of energy. We are seeing paradigm shifts moving from the Atlantic basin to the Pacific in terms of energy trade flows,” Fannon explained. A major component of the Free and Open Indo-Pacific strategy will be the Enhancing Development and Growth through Energy program (Asia EDGE), which Fannon described as a “whole of government approach” to “support and strengthen the energy security of friends and allies in the region.”

“We deeply believe,” Fannon said, “in creating a level playing field and no single supplier of energy should be able to use that energy for malign means.”

Fannon also detailed US involvement in efforts to increase energy cooperation in the Eastern Mediterranean. “What is going on [there] is just fantastic and has the potential to be a real game changer in terms of energy markets,” Fannon said. “But it also can be a best practice [example] in cooperation.”

According to Fannon, the United States’ goals in pursuing energy cooperation and development programs around the world are simple. “We want to provide for fair and reciprocal trade of energy… [and] open access of affordable and reliable energy for all. [That access] is a really a development pathway.”