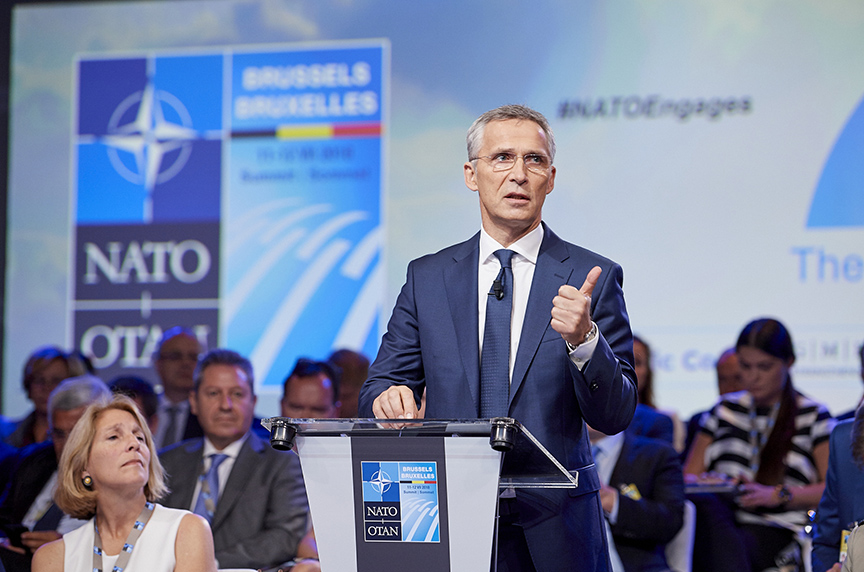 NATO Secretary General Jens Stoltenberg on July 11 credited US President Donald J. Trump for pushing a “clear message” that allies need to invest more in their national defense, and argued that real increases in spending have been a direct result of this push.

When pushed by moderator Barbara Starr, CNN’s Pentagon correspondent, to explain Trump’s commitment to the Alliance, Stoltenberg assured the audience that “President Trump has stated many times his commitment to NATO and also to our collective defense goals…Actions speak louder than words.”

“Since Trump became president, US funding for military presence in European has been increased by forty percent,” he said.

The secretary general detailed the substantial progress allies have made to raise their defense spending levels. He announced on July 10 that eight NATO members: the United Kingdom, Greece, Latvia, Estonia, Poland, Lithuania, Romania, and the United States would meet the two percent of GDP target for defense spending this year, an increase from only three members in 2014.

Stoltenberg also noted that “all allies have stopped the [defense] cuts. All allies have started to increase” their defense spending and “a majority of allies have put forward plans to reach 2 percent by the end of the decade.”

However, Stoltenberg did acknowledge the significant divisions among NATO allies, made starker by Trump’s comments criticizing Germany’s energy agreements with Russia during a breakfast with Stoltenberg before the NATO Engages event.

“The transatlantic bond is not one bond,” Stoltenberg argued. “There are many ties. Some of them have been weakened…but when it comes to defense, we have actually strengthened the transatlantic bond, we do more together now than just a couple of years ago.” NATO has faced serious divisions in the past, he explained, including the Suez Canal crisis, France’s withdrawal from NATO’s military command in the 1960s, and the Iraq War, but NATO allies have “been able to overcome serious differences before and then unite around our core task,” of providing common security and defense.

Stoltenberg also called on NATO leaders to “make the necessary decisions…to show that NATO is delivering,” as the Brussels Summit opened on July 11.

Stoltenberg, a twice-former prime minister of Norway who has served as NATO’s top official since 2014, acknowledged the many differences currently dividing NATO allies, but argued that recent successes show that the Alliance is strengthening.

“What we see on the ground [is that] Europe and North America are doing more together. We are not weakening the transatlantic bond in NATO, we have been increasing it,” he said, pointing to Canada’s July 10 announcement committing additional troops and extending its deployment in Latvia, as well as increased US troop deployments to Europe.

“Over the last few years,” he argued, NATO has “implemented the big modernization, the biggest reinforcement of collective defense since the end of the cold war. I am actually quite impressed by what we have been able to accomplish over a very short period of time.”

Looking ahead to the Brussels Summit beginning on July 11, Stoltenberg said he expected NATO leaders to agree to a range of new initiatives. He said NATO leaders will agree to establish two new command centers, one in Norfolk, Virginia, for the Atlantic Command, and one in Ulm, Germany, for support logistics in Europe. He also expected allies to agree to the new “Four Thirties” Readiness Initiative, a new training mission to Iraq, and increased support for NATO’s training mission to Afghanistan.

For Stoltenberg, the July 11-12 Brussels Summit is “in many ways more important than normal NATO summits.” NATO’s members must move past their many divisions “to keep this family together—twenty-nine members from both sides of the Atlantic, different history, different geography, different political leaders.”

“But, as long as we unite around our core task—to protect and defend each other,” Stoltenberg concluded, we will “be safe and secure.”