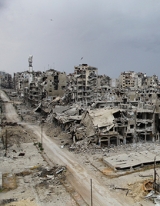 War crimes and crimes against humanity – committed both by regime forces and particular extremist groups such as the Islamic State of Iraq and al-Sham – continue in Syria.

Stephen J. Rapp, ambassador-at-large of the Office of Global Criminal Justice, spoke at the Atlantic Council on July 2 about the State Department’s ongoing efforts to promote accountability for these  crimes.

The below Storify is a curated look at the social media discussion that accompanied the event.

Image: Homs, Syria: Destroyed buildings after the cessation of fighting between rebels and forces loyal to Syria President Bashar al-Assad; May 10, 2014. REUTERS/Ghassan Najjar